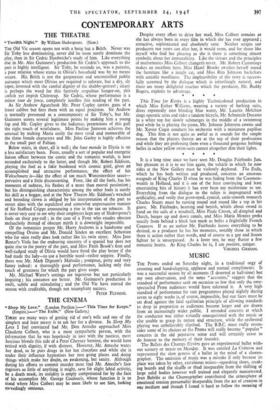 THERE are many ways of getting rid of one's wife and one of the simplest and least messy is to ask her for a divorce. In Sleep My Love I feel convinced had Mr. Don Ameche approached Miss Claudette Colbert, who is a most sympathetic person, with the information that he was hopelessly in love with the nastiest, most luscious blonde this side of a Peter Cheyney heroine she would have retired with dignity, if with distress. However, M;. Ameche wants her dead, so he puts drugs in her hot chocolate and while she is under their influence hypnotises her into going places and doing things which make her doubt, on awakening, her sanity. Although during his efforts to commit murder most foul Mr. Ameche's face registers so little of anything it might, save, for slight labial activity, be a death mask, its stolidity is amply compensated for by the face of his accomplice Mr. George Coulouris Whose function it is to stand where Miss Colbert may be most likely to see him, looking exceedingly ominous. Despite every effort to drive her mad, Miss Colbert remains as she has always been in every film in which she has ever appeared ; attractive, sophisticated and absolutely sane. Neither scripts nor producers nor years can alter her, it would seem, and for those like myself who find her pleasing as she is there is something almost symbolic about her immutability. Like the virtues and the principles of mathematics Miss Colbert changeth never. Mr. Robert Cummings makes an excellent hero, Miss Hazel Brooks swathes herself round the furniture like a jungle cat, and Miss Rita Johnson backchats with amiable woolliness. The implausibility of the story is success- fully screened by the dialogue which is refreshingly natural, and there are many delightful touches which the producer, Mr. Buddy Rogers, exploits to advantage.

This Time for Keeps is a highly Technicolored production in which Miss Esther Williams, wearing a variety of bathing suits, dives repeatedly into blinding blue water, Mr. Lauritz Melchior sings operatic arias and rides a tandem bicycle, Mr. Schnozzle Durante in a white -top hat slowly submerges in the middle of a swimming pool while he is playing the piano, Mr. Johnnie Johnston croons and Mr. Xavier Cugat conducts his orchestra with a miniature papillon dog. This film is not quite as awful as it sounds for the simple reason that the players therein are at the top of their professions and while they are professing them even a thousand gorgeous bathing belles in ochre yellow swim-suits cannot altogether dim their lights.

It is a long time since we have seen Mr. Douglas Fairbanks Jun. but pleasant as it is to see him again, the vehicle in which he now rides at the New Gallery must be violently deplored. The Exile, which he has both written and produced, concerns an amorous escapade of King Charles H when he was hiding from the Common- wealth in Holland, and it is one of the least convincing and least entertaining bits of history it has ever been my misfortune to see. Everything from the dialogue to the tulips is impregnated with artificiality, and verily that grave-eyed, cynical, satin-smooth monarch Charles Stuart must be turning round and round like a top in his grave. Mr. Fairbanks, beaming and boyish, whirls about sword in hand on the sails of a windmill, Miss Paule Croset, all dimpled and Dutch, barges up and down canals, and Miss Maria Montez peeks saucily from behind a black lace mask as befits a frightfully French Countess. If as an author Mr. Fairbanks leaves everything to be desired, as a producer he has his moments, notably those in which there is action rather than words, and of course as a gay and lissom fighter he is unsurpassed. As a lover too, he may flutter a few romantic hearts. As King Charles he is, I am positive, unique.