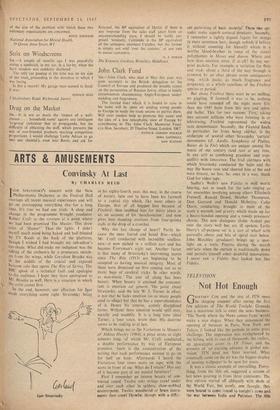 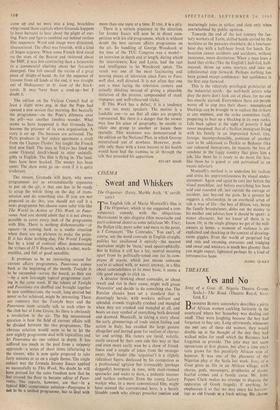 EOFFREY COX and the rest of ITN must be sleeping sounder after seeing the first few editions of The World Tonight. Granada has a notorious itch to enter the news business. 'The North where the News comes from' would make a nice slogan. When they announced the opening of bureaux in Paris, New York and Tokyo, it looked like•the prelude to some great challenge. The impression was strengthened by the billing, with its cast of thousands, the trailers. an apocalyptic cover to TV Times, and the promise of 'an exciting advance in global tele- vision.' ITN need not have worried. What eventually came on the air was the biggest display of moving wallpaper to be seen for years.

It was a classic example of overselling. Every- thing, from the title on, suggested a stream of hot news pouring in from three continents. The first edition started off obliquely with shots of the World Fair, but surely, one thought, they were bound to come round to tonight's news and the war between India and Pakistan. The .title

came up and we were into a long, breathless whip round those capitals where Granada happens to have bureaux to hear about the plight of ster- ling. Facts and figures tumbled out behind restless film sequences. Word and image were disjointed, disassociated. The effect was feverish, with a kind of bogus urgency. When some French bird stood on the steps of the Bourse and twittered about the IMF, it was less convincing than a housewife in a commercial chatting about her favourite detergent. One felt oneself the victim of a great piece of sleight-of-hand. As for the sequence of tycoons from all lands at the end, it was straight out of Mahagonny or St. Joan of the Stock- yards. It may 'have been a send-up--but I doubt it.

The edition on the Vatican Council had at least a slight news peg, in that the Pope had opened a new session that morning. But basically the programme—on the Pope's dilemma over the pill—was another timeleis wonder. What seems to have happened is that Granada has become the prisoner of its own organisation. A story is set up. The bureaux are activated. The Paris producer in 'her sedate apartment a stroll from the Champs Nysees' has taught the French bird new find. The man in Tokyo has lined up some Oriental death's-head to utter unintelli- gibly in English. The film is flying in. The land- lines have been booked. The money has been spent. The show must go on—even if it is quite irrelevant.

The reason, Granada will learn, why news programmes are so extraordinarily expensive to put oh the air, is that one has to be ready to scrap the whole thing on the day of trans- mission and do something else. If you are not prepared to do this, you should not call it a news programme but choose some safer title like The World -in Action or This Week or Pano- rama. And you should admit that it is not always possible to cover every inch of the programme with film. There is nothing dishonourable—or square—in coming back to a studio situation when there are no pictures to make the point. If it has done nothing else, The World Tonight has by a kind of contrast effect demonstrated the virtues of ITN Reports, which is sober, work- manlike, and full of good newsfiltn.

It promises to be an interesting season for current affairs programmes. Panorama comes back at the beginning of the month. Tonight is to be succeeded—across the board, as they say —by a new late-night -topical programme start- ing in the same week. If the talents of Tonight and Panorama are shuffled and brought together in new combinations, the result, long desired but never so far achieved, might be interesting. There are rumours that the Tonight boys and the Panorama team actually talk to each other in the club bar at Lime Grove. So there is obviously a revolution in the air. The big unanswered question is how the field of current affairs will be divided between the two programmes. The obvious solution would seem to be to let the new nightly programme deal with topicalities and let Panorama do one subject in depth. It has suffered too much in the past from a snippety approach—a series of short items infuriating to the viewer, who is now quite prepared to take forty minutes or so on a single theme. The single subject was the formula Jeremy Isaacs applied so successfully to This Week. No doubt he will have pressed for the same freedom now that he has crossed the floor to become editor of Pano- rama. The reports, however, are that—in a typical BBC compromise solution—Panorama is not to be a unified programme, but to seal with

more than one topic at a time. If true, it is a pity.

There is a certain piquancy in the situation, for Jeremy Isaacs will now be in direct com- petition with his old programme, which is without doubt the best current affairs programme on the air. Its handling of George Woodcock at the time of the TUC Congress was a model— an interview in depth and at length, during which' the interviewers, Kee and Levin, had the tact and intelligence to let Woodcock speak. The result was one of the most fascinating and moving pieces of television since Face to Face, well shot, well directed. It is not often that one sees a man facing the television camera and actually thinking instead of giving a plausible imitation of the process, compounded of stock responses and well-rehearsed tricks.

If This Week has a defect, it is a tendency to use too many speakers. The motive is a laudable one—to see that all sides are properly represented. But there is a danger that the viewer may lose his sense of geography, be unable to relate one group to another or locate them spatially. This weakness was demonstrated in the edition on the National Plan, in which George materialised out of nowhere. However, prob- ably only those with a keen interest in his health would have had the stamina to sit through the talk that preceded his apparition.