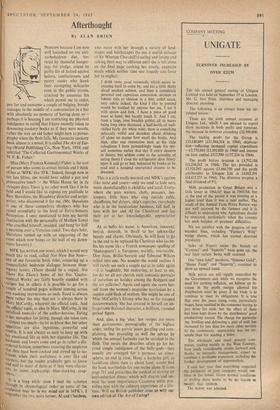 PERHAPS because I am now well launched on my anti- carbohydrate diet, tor- tured by shameful hunger- ings for stodge, seized by guilty fits of hatred against bakers, confectioners and pastry cooks who hawk their corrupting delicacies even in the public 'streets, attacked by amnesiac fits which permit me to order,

pay for and consume a couple of bulging, bready sausages in the middle of a conversation in a bar With absolutely no memory of having done so-- perhaps it is becausi I am restricting my physical indulgence in eating that I have recently taken to

Miss (Mary Frances Kennedy) Fisher is the sort Of person who seems to attract initials and I think Of her as WM(' like 'JFK.' Indeed, though now in her late fifties, she would have added a gay and provocative touch !,, the White House Set in its swingier days. 'There L no other work like it in its field and I would like to express my gratitude to Burt Shevelove, the Broadway director and script- writer, who discovered it for me. (Mr. Shevelove IS one of those compulsive shoppers who has raised serendipity to the level of Extra-Sensory Perception. I once mentioned to him my horrid fascination with the personality of Mathew Lovat who crucified himself, unaided, and hung for half a morning over a Venetian canal. Two days later, Shevelove turned up with an engraving of the event which now hangs on the wall of my down- stairs lavatory.) MFK has written one novel, which I would very much' like to read, called Not Now But Now— one of my favourite book titles, conjuring ,up a monosyllabic bedroom dialogue between Hem- ingway lovers. (There should be a sequel, Not There But There.) Sonic of her five 'Gastro- nomical Works' are fairly heavily studded with recipes but in others it is possible to go for a couple of. hundred pages without coming across anY cooking instructions as such. Food is always there rather the way that sex is always there in Mary McCarthy, whatever the official topic. And the official topic, as also in Mary McCathy, is the serialised memoirs of the author-heroine. Eating 'her metaphor for living, though she takes care --almost too much--to let us know that her other alvetities are also ingenious, powerful and erudite. It is not always as easy to keep up with her emotional life as with her digestive life. The husbands and lovers come and go in rather a dis- (t)rdered fashion, sometimes arousing the suspicion hat they have been cooked and served up to her I:lends when their usefulness is over like old roosters, but the reader gradually gets to know '‘tind nod to most of them as if they were charac- ers in some high-camp, blue-stocking soap- oPera.

I, it is a long while since I read the volumes :Iratigh in chronological order so some of the c:ronfusion may be in my mind not in MFICs. eqlember the two main heroes, Al and Chexbres, who move with her through a variety of land- scapes and bottlescapes (to use a useful coinage of Sir Winston Churchill's) eating and loving and talking their way to oblivion until she is left alone on the final page cooking her lonely, exquisite meals which neither time nor tragedy can force her to neglect : I drink some good vermouth, which seems in- creasing hard to come by, and eat a little thinly sliced smoked salmon, and then a completely personal and capricious concoction, shrimps or lobster tails or chicken in a thin, artful sauce.

very subtle indeed, the kind I like to pretend would be loathed by anyone but me. I eat it with spoon and fork I have a piece of good toast at hand, but hardly touch it. And I sip, from a large, lone Swedish goblet, all its mates being long since shattered, a half-bottle of well- chilled fairly dry white wine; there is something delicately wilful and decadent about drinking all alone no matter how small the bottle. And then, after one ruminative look at the little zabaglione I have painstakingly made for my- self sometime earlier that day (I enjoy desserts in theory, but seldom come to the actuality of eating them) I close the refrigerator door firmly upon it and go to bed, bolstered by books to be read and a hundred unattended dreams to be dreamed.

This is a style easily mocked and MFK's egoism (like mine and yours—only we tend to hide ours more shamefacedly) is childlike and total. Every- where she goes waiters, chefs, peasants, inn- keepers, little boys who sing outside cafes, chauffeurs, but drivers, ship's captains, everybody who is in the local-colour business, fall half in love with her and Al (or Chexbres) and lay their art at her knowledgeable, appreciative feet.

Al. as befits his name, is American, innocent; boyish. donnish, in thrall to her sphinx-like beauty and charm. Obviously, he will have to go in the end to be replaced by Chexbres who (as be- fits his name like a French newspaper spelling of 'Shakespeare') is European, worldly, inscrutable, Don Juan, Brillat-Savarin and Edmund Wilson rolled into one. No wonder the world realises it will rarely see such a couple eat at its table again --it is laughable, but endearing, at least to me, for do we all not cherish such romantic portraits of ourselves on holiday among the fleshpots and the art galleries? Again and again she saves her- self from the women's magazine narcissism by a sudden cold flash of realism. She might be one of - Miss McCarthy's Group who has so far escaped documentation. She has created in herself an un- fOrgettable fictional character, a brilliant, rounded period figure.

And, also, a big `also,' her recipes are more than gastronomic pornography of the highest order, setting the gastric juices gurgling and com- plaining, but providing as well the advice by which the sensual fantasies can be satisfied in the flesh. The meals she describes often go far be- yond simple indulgence of the belly-gods--they usually are arranged for a purpose, an atmo- sphere, an end in view. Many a bachelor girl, as fastidious about men as about food, would find the book worthwhile for one recipe alone. It is on page 711 and prescribes the method of serving an anti-seduction dinner which will disarm and un- man the most importunate Casanova while pro- viding him with the culinary experience of a life- time. Will no British publisher issue us with our own edition of The Art of Eating?