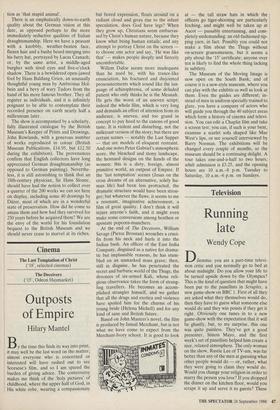 By the time this finds its way into print, it may well be the last word on the matter; almost everyone who is concerned or interested will have rushed out to see Scorsese's film, and so I am spared the burden of giving advice. The controversy makes me think of the 'holy pictures' of childhood, where the upper half of God, in His white robe, wearing a compassionate but bored expression, floats around on a radiant cloud and gives rise to the infant speculation, does God have legs? When they grow up, Christians seem embarras- sed by Christ's human nature, because they know what being human entails; and any attempt to portray Christ on the screen to choose one actor and say, 'He was like that' — makes people deeply and fiercely uncomfortable.

Willem Dafoe seems more inadequate than he need be, with his trance-like enunciation, his fractured and disjointed pronouncements which sound like the lan- guage of schizophrenia, of some deluded patient who only thinks he is the Messiah. He gets the worst of an uneven script; indeed the whole film, which is very long and demands an effort of attention from its audience, is uneven, and too grand in concept to pay heed to the canons of good taste. It is violent and disturbing, not the milktoast version of the story; but there are certain scenes — notably the Last Supper — that are models of eloquent restraint. And one notes Peter Gabriel's atmospheric score, the bleached and stony landscape, the hennaed designs on the hands of the women: this is a dirty, foreign, almost primitive world, an outpost of Empire. If the 'last temptation' scenes (Jesus on the cross dreams of an alternative, solely hu- man life) had been less protracted, the dramatic structure would have been stron- ger; but whatever the flaws, it seems to me a resonant, imaginative achievement, a film of great quality. I don't think it will injure anyone's faith, and it might even make some conversions among heathen or apostate popcorn-munchers.

At the end of The Deceivers, William Savage (Pierce Brosnan) wrenches a cruci- fix from his neck and hurls it into the Indian bush. An officer of the East India Company, disguised as a native for drama- tic but implausible reasons, he has stum- bled on an unmarked mass grave; then, still in disguise, he has penetrated the secret and barbaric world of the Thugs, the devotees of six-armed Kali, whose reli- gious observance takes the form of strang- ling travellers. He becomes an accom- plished strangler himself, and we gather that all the drugs and exotica and violence have spoiled him for the charms of his young bride (Helena Michell) and for any kind of sane and British future.

Based on John Masters's novel, the film is produced by Ismail Merchant, but is not what we have come to expect from the Merchant-Ivory school. It is good to look at — the tall straw hats in which the officers go tiger-shooting are particularly fetching, and might well be taken up at Ascot — passably entertaining, and com- pletely undemanding: an old-fashioned rip- ping yarn, in fact. Possibly you could not make a film about the Thugs without on-screen gruesomeness, but it seems a pity about the '15' certificate; anyone over ten is likely to find the whole thing lacking in subtlety.

The Museum of the Moving Image is now open on the South Bank; and of course it is a new-style museum, where you can play with the exhibits as well as look at them. Even the guides are different; in- stead of men in uniform specially trained to glare, you have a company of actors who will guide you through the 40 subject areas which form a history of cinema and televi- sion. You can edit a Chaplin film and take a screen test; you can, if such is your bent, examine a scarlet sofa shaped like Mae West's lips, or see yourself interviewed by Barry Norman. The exhibitions will be changed every couple of months, so the museum should be a continuing delight. A tour takes one-and-a-half to two hours; adult admission is £3.25, and the opening hours are 10 a.m.-8 p.m. Tuesday to Saturday, 10 a.m.-6 p.m. on Sundays.