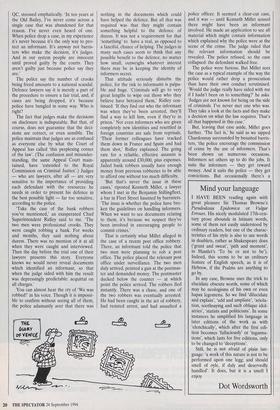 I HAVE BEEN reading again with great pleasure Sir Thomas Browne's Pseudodoxia Epidemica or Vulgar Errours. His nicely modulated 17th-cen- tury prose abounds in latinate words, some of them not easily understood by ordinary readers, but one of the charac- teristics of his style is also to use words in doublets, rather as Shakespeare does (`grunt and sweat', 'pith and moment', in Hamlet's 'To be or not to be'). Indeed, this seems to be an ordinary feature of English speech, as it is of Hebrew, if the Psalms are anything to go by.

In any case, Browne uses the trick to elucidate obscure words, some of which may be neologisms of his own or even hapax legomena. So we find `dilucidate and explain', 'add and ampliate', `ariola- tion, soothsaying and such oblique idol- atries', 'statists and politicians'. In some instances he simplified his language in later editions of the work as with `elenchically', which after the first edi- tion becomes 'fallaciously' or inganna- tions', which lasts for five editions, only to be changed to 'deceptions'.

Still, he is not afraid of plain lan- guage: 'a work of this nature is not to be performed upon one legg; and should smell of oyle, if duly and deservedly handled'. It does, but it is a smell I enjoy.