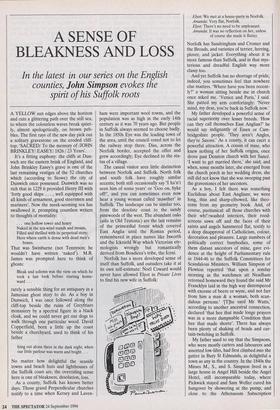 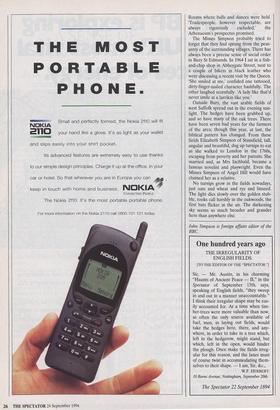 A SENSE OF BLEAKNESS AND LOSS

A YELLOW sun edges above the horizon and cuts a glittering path over the still sea, to where the colourless waves break quiet- ly, almost apologetically, on brown peb- bles. The first rays of the new day pick out a solitary gravestone on the eroded cliff- top: 'SACRED/ To the memory of /JOHN BRINICLEY/ EASEY/ 1826 / 23 Years'.

It's a fitting euphony: the cliffs at Dun- wich are the eastern brink of England, and John Brinkley Easey's grave is one of the last remaining vestiges of the 52 churches which (according to Stowe) the city of Dunwich once possessed. Dunwich was so rich that in 1229 it provided Henry III with `forty good ships . . . , well equipped with all kinds of armament, good steersmen and mariners'. Now the meek-seeming sea has swallowed it, prompting countless writers to thoughts of mortality: ... one hollow tower and hoary

Naked in the sea-wind stands and moans, Filled and thrilled with its perpetual story; Here where earth is dense with dead men's bones.

That was Swinburne (not Tennyson; he wouldn't have written 'naked). M.R. James was prompted here to think of ghosts:

Bleak and solemn was the view on which he took a last look before starting home- ward .. .

rarely a sensible thing for an antiquary in a Jamesian ghost story to do. As a boy in Dunwich, I was once followed along the cliff-top beside the ruins of Greyfriars monastery by a spectral figure in a black cloak, and we could never get our dogs to walk through one particular wood. David Copperfield, born a little up the coast beside a churchyard, used to think of his father

lying out alone there in the dark night, when our little parlour was warm and bright .

No matter how delightful the seaside towns and beach huts and lighthouses of the Suffolk coast are, the overriding sense here is one of bleakness, desolation, loss.

As a county, Suffolk has known better days. Those grand Perpendicular churches testify to a time when Kersey and Laven- ham were important wool towns, and the population was as high in the early 14th century as it was 70 years ago. But people in Suffolk always seemed to choose badly. In the 1850s Eye was the leading town of the area, until the council voted not to let the railway stop there. Diss, across the Norfolk border, accepted the offer and grew accordingly; Eye declined to the sta- tus of a village.

The casual visitor sees little distinction between Norfolk and Suffolk. North folk and south folk have roughly similar accents; both still occasionally say ha'n't seen him of some years' or 'Goo on, hyke off!', and you can sometimes even now hear a young woman called `rnawther' in Suffolk. The landscape can be similar too, from the desolate coast to the sandy pinewoods of the west. The abundant oaks (aiks in Old Teutonic) are the last remains of the primordial forest which covered East Anglia until the Roman period, remembered in place names like Ixworth and the Icknield Way which Victorian ety- mologists wrongly but romantically derived from Boadicea's tribe, the Iceni.

Norfolk has a more developed sense of itself than Suffolk, and outsiders take it at its own self-estimate: Noel Coward would never have allowed Elyot in Private Lives to find his new wife in Suffolk: Elyot: We met at a house-party in Norfolk. Amanda: Very flat, Norfolk.

Elyot: There's no need to be unpleasant. Amanda: It was no reflection on her, unless of course she made it flatter.

Norfolk has Sandringham and Cromer and the Broads, and varieties of terrier, herring, plover, and jacket. Everything about it is more famous than Suffolk, and in that mys- terious and dreadful English way more classy too.

And yet Suffolk has no shortage of pride; indeed, you sometimes feel that nowhere else matters. 'Where have you been recent- ly?' a woman sitting beside me in church once asked me. 'Venice and Paris,' I said. She patted my arm comfortingly: 'Never mind, my dear, you're back in Suffolk now.'

My father developed a powerful sense of racial superiority over lesser breeds. 'How can they call themselves East Anglian?' he would say indignantly of Essex or Cam- bridgeshire people. 'They aren't Angles, they're Saxons.' As a county, it can exert a powerful attraction. A cousin of mine, who knew nothing of her Suffolk origins, once drove past Denston church with her fiance. I want to get married there,' she said; and when, some months later, she emerged from the church porch in her wedding dress, she still did not know that she was sweeping past the gravestones of her ancestors.

As a boy, I felt there was something Euclidean about East Anglians; we were long, thin and sharp-elbowed, like theo- rems from my geometry book. And, of course, puritanical: all those churches with their whr mashed interiors, their rood- screens sawn off and the faces of their saints and angels hammered flat, testify to a deep disapproval of Catholicism, colour, decoration and pleasure. Large numbers of politically correct busybodies, some of them distant ancestors of mine, gave evi- dence at the height of Parliamentary rule in 1644-46 to the Suffolk Committees for Scandalous Ministers. William Simpson of Flowton reported 'that upon a sonday morning as the watchmen att Neadham retorned homeward they found the said Mr Francklyn laid in the high way distempered with excesse of beere or wyne, and not farr from him a man & a woman, both scan- dalous persons.' [T]he sayd Mr Watts,' according to another ancestral connection, declared 'that hee that made longe prayers was in a more dampnable Condition than hee that made shorte'. There has always been plenty of shaking of heads and cur- tain-twitching in Suffolk.

My father used to say that the Simpsons, who were mostly carters and labourers and assorted low-lifes, had first climbed into the gutter in Bury St Edmunds, as delightful a town as any in the country. In the 1840s the Misses M., S., and S. Simpson lived in a large house in Angel Hill beside the Angel Hotel, still incomparable today, where Pickwick stayed and Sam Weller cured his hangover by showering at the pump, and close to the Athenaeum Subscription Rooms where balls and dances were held. `Tradespeople, however respectable, are always rigorously excluded,' the Athenaeum's prospectus promised.

The Misses Simpson probably tried to forget that they had sprung from the peas- antry of the surrounding villages. There has always been a precise sense of social order in Bury St Edmunds. In 1964 I sat in a fish- and-chip shop in Abbeygate Street, next to a couple of bikers in black leather who were discussing a recent visit by the Queen. `She smiled at me,' confided one tattooed, dirty-finger-nailed character bashfully. The other laughed scornfully. 'A lady like that'd never smile at a larrikin like you.'

Outside Bury, the vast arable fields of west Suffolk spread out in the evening sun- light. The hedges have been grubbed up, and so have many of the oak trees. There have been seven bad years for the farmers of the area; though this year, at last, the biblical pattern has changed. From these fields Elizabeth Simpson of Stansfield, tall, angular and beautiful, dug up turnips to eat as she walked to London in the 1760s, escaping from poverty and her parents. She married and, as Mrs Inchbald, became a famous novelist and playwright. Even the Misses Simpson of Angel Hill would have claimed her as a relative.

No turnips grow in the fields nowadays, just oats and wheat and rye and linseed. The light dies slowly over the golden stub- ble, rooks call harshly in the oakwoods, the first bats flicker in the air. The darkening sky seems so much broader and grander . here than anywhere else.

John Simpson is foreign affairs editor of the BBC.