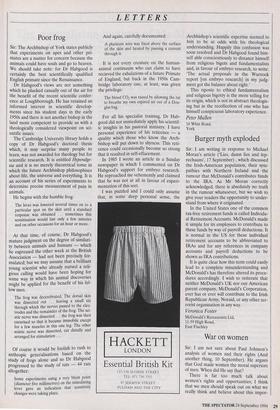 Sir: The Archbishop of York states publicly that experiments on apes and other pri- mates are a matter for concern because the animals could have souls and go to heaven. We should take note: for Dr Habgood is certainly the best scientifically qualified English primate since the Renaissance.

Dr Habgood's views are not something which he plucked casually out of the air for the benefit of the recent scientific confer- ence at Loughborough. He has retained an informed interest in scientific develop- ments since his student days in the early 1950s and there is not another bishop in the land more competent to provide us with a theologically considered viewpoint on sci- entific issues.

The Cambridge University library holds a copy of Dr Habgood's doctoral thesis which, it may surprise many people to learn, was not awarded for theology but for

scientific research. It is entitled Hyperalge- sia and it is no merely theoretical tome in which the future Archbishop philosophises

about life, the universe and everything. It is an account of his series of experiments to determine precise measurement of pain in animals.

He begins with the humble frog:

The lever was lowered several times on to a particular spot on the skin until a standard response was obtained ... sometimes this sensitisation would last only a few minutes and on other occasions for an hour or more.

At that time, of course, Dr Habgood's mature judgment on the degree of similari- ty between animals and humans — which he expressed the other week at the British Association — had not been precisely for- mulated; but we may assume that a brilliant young scientist who already nursed a reli- gious calling would have been hoping for some way in which his animal discoveries might be applied for the benefit of his fel- low men.

Of course it would be foolish to rush to anthropic generalisations based on the study of frogs alone and so Dr Habgood progressed to the study of rats — 44 rats altogether:

Some experiments using a very blunt point (diameter five millimetres) on the stimulating lever gave an indication that sensitivity changes were taking place.

A platinum wire was fixed above the surface of the skin and heated by passing a current through it.

It is not every creature on the human- animal continuum who can claim to have recieved the exhalations of a future Primate of England, but back in the 1950s Cam- bridge laboratory one, at least, was given the privilege: The blood CO2 was raised by allowing the rat to breathe my own expired air out of a Dou- glas bag.

For all his specialist training, Dr Hab- good did not immediately apply his scientif- ic insights in his pastoral ministry. I have personal experience of his reticence — a quality which those who know the Arch- bishop will put down to shyness. This reti- cence could occasionally become so strong that it resulted in self-effacement.

In 1985 I wrote an article in a Sunday newspaper in which I commented on Dr Habgood's support for embryo research. He reproached me vehemently and claimed that he was not at all in favour of experi- mentation of this sort.

I was puzzled and I could only assume that, in some deep personal sense, the Archbishop's scientific expertise seemed to him to be at odds with his theological understanding. Happily this confusion was soon resolved and Dr Habgood found him- self able conscientiously to distance himself from religious bigots and fundamentalists and, in favour of embryo research, to write: `The actual proposals in the Warnock report [on embryo research] in my judg- ment got the balance about right.'

This riposte to ethical fundamentalism and religious bigotry is the more telling for its origin, which is not in abstract theologis- ing but in the recollection of one who has himself conspicuous laboratory experience. Peter Mullen