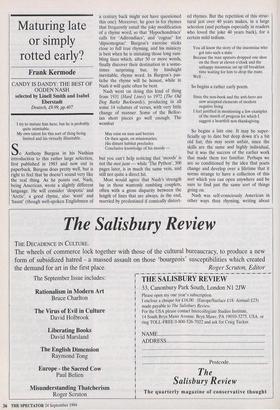 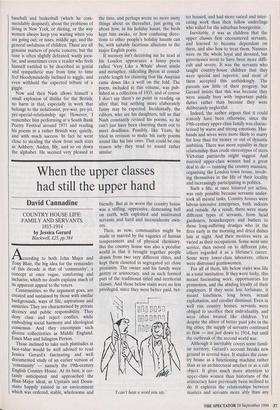 I try to imitate him here, but he is probably quite inimitable.

My own talent for this sort of thing being limited and his virtually illimitable.

So Anthony Burgess in his Nashian introduction to this rather large selection, first published in 1983 and now out in paperback. Burgess does pretty well, but is right to feel that he doesn't sound very like the real thing. As he points out, Nash, being American, wrote a slightly different language. He will consider 'despotic' and `Arctic', a good rhyme, also 'want' and `haunt' (though well-spoken Englishmen of a century back might not have questioned this one). Moreover, he goes in for rhymes that frequently entail the joky modification of a rhyme word, so that 'Hypochondriacs' calls for 'Adirondiacs', and 'cognac' for `dipsomognac'. Burgess's exercise sticks close to full true rhyming, and his mimicry is best when he is imitating those long ram- bling lines which, after 50 or more words, finally discover their destination in a some- times surprising but, by hindsight inevitable, rhyme word. In Burgess's pas- tiche the rhyme will be honest, while in Nash it will quite often be bent.

Nash went on doing this kind of thing from 1931 (Hard Lines) to 1972 (The Old Dog Barks Backwards), producing in all some 14 volumes of verses, with very little change of manner. Some of the Belloc- ian short pieces go well enough. The wombat

May exist on nuts and berries Or then again, on missionaries; His distant habitat precludes Conclusive knowledge of his moods -

but you can't help noticing that 'moods' is not the mot juste — while 'The Python', 300 pages later, is in much the same vein, and still not quite a direct hit. Most would agree that Nash's 'strength lay in those wantonly rambling couplets, often with a gross disparity between the length of lines that are always, in the end, married by predestined if comically distort- ed rhymes. But the repetition of this struc- tural jest over 40 years makes, in a large selection (and perhaps especially in readers who loved the joke 40 years back), for a certain mild tedium.

You all know the story of the insomniac who got into such a state Because the man upstairs dropped one shoe on the floor at eleven o'clock and the unhappy insomniac sat up till breakfast time waiting for him to drop the mate.

So begins a rather early poem.

Since the non-book and the anti-hero are now accepted elements of modern negative living I feel justified in mentioning a few examples of the march of progress for which I suggest a heartfelt non-thanksgiving.

So begins a late one. It may be super- ficially up to date but deep down it's a bit old hat; this may seem unfair, since the skills are the same and highly individual, but it was the success of the earlier work that made them too familiar. Perhaps we are so conditioned by the idea that poets change and develop over a lifetime that it seems strange to have a collection of this sort which you can open anywhere and be sure to find just the same sort of things going on.

Nash was self-consciously American in other ways than rhyming, writing about baseball and basketball (which he com- mendably despised), about the problems of living in New York, or dieting, or the way women always keep you waiting when you are going out; or taxes, middle age, and the general awfulness of children. These are all genuine matters of poetic concern, but the tone is often slightly defeated, wanly jocu- lar, and sometimes even a reader who feels himself entitled to be described as genial and sympathetic may from time to time feel bloodymindedly inclined to niggle, and even withhold the expected tribute of a giggle.

Now and then Nash allows himself a small explosion of dislike for the British; no harm in that, especially in work that belongs to the isolationist, pre-war, pre-jet, pre-special-relationship age. However, I remember him performing at a South Bank Poetry Festival around 1971 and reading his poems in a rather British way, quietly, and with much success. In fact he went close to stealing the show from such stars as Ashbery, Auden, Bly, and so on down the alphabet. He seemed very pleased at the time, and perhaps wrote no more nasty things about us thereafter, just going on about how, in his holiday haunt, the birds kept him awake, or how confusing direc- tions to other people's holiday haunts can be, with suitably facetious allusions to the major English poets.

If memory isn't deceiving me he read at his London appearance a funny poem called 'Very Like a Whale' about simile and metaphor, ridiculing Byron at consid- erable length for claiming that the Assyrian came down like a wolf on the fold. The poem, included in this volume, was pub- lished in a collection of 1935, and of course I don't say there's no point in reading on after that, but nothing more elaborately funny may be expected. Incidentally, the editors, who are his daughters, tell us that Nash constantly revised his poems, so he can't just have been churning them out to meet deadlines. Possibly, like Yeats, he tried in revision to make his early poems sound like his late ones. That could be one reason why they tend to sound rather similar.