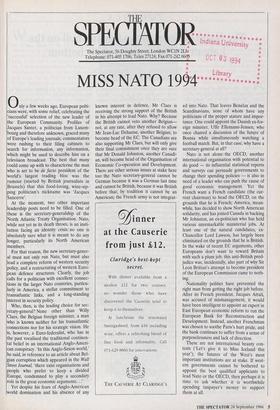 cians were, with some relief, celebrating the `successful' selection of the new leader of the European Community. Profiles of Jacques Sauter, a politician from Luxem- bourg and therefore unknown, graced many of Europe's leading journals; commentators were rushing to their filing cabinets to search for information, any information, which might be used to describe him on a television broadcast. The best that many could come up with to characterise the man who is set to be de facto president of the world's largest trading bloc was the rumour (started by British journalists in Brussels) that this food-loving, wine-sip- ping politician's nickname was 'Jacques Sancerre'.

At the moment, two other important leadership posts need to be filled. One of these is the secretary-generalship of the North Atlantic Treaty Organisation. Nato, while not yet in its death throes, is an insti- tution facing an identity crisis: no one is absolutely sure what it is meant to do any longer, particularly its North American members.

For that reason, the new secretary-gener- al must not only run Nato, but must also lead a complete reform of western security policy, and a restructuring of western Euro- pean defence structures. Clearly, the job calls for a politician with excellent connec- tions in the larger Nato countries, particu- larly in America, a stellar commitment to transatlantic links, and a long-standing interest in security policy.

Who, then, is the leading choice for sec- retary-general? None other than Willy Claes, the Belgian foreign minister, a man who is known neither for his transatlantic connections nor for his strategic vision. He is, however, a Euro-federalist, who has in the past vocalised the traditional continen- tal belief in an international Anglo-Ameri- can conspiracy. 'In this Anglo-Saxon world,' he said, in reference to an article about Bel- gian corruption which appeared in the Wall Street Journal, 'there exist organisations and people who prefer to keep a divided Europe, condemned to play a secondary role in the great economic arguments. ..'

Yet despite his fears of Anglo-American world domination and his absence of any known interest in defence, Mr Claes is receiving the strong support of the British in his attempt to lead Nato. Why? Because the British cannot veto another Belgian— not, at any rate, after they refused to allow Mr Jean-Luc Dehaene, another Belgian, to become head of the EC. The Canadians are also supporting Mr Claes, but will only give their final commitment once they are sure that Mr Donald Johnston, another Canadi- an, will become head of the Organisation of Economic Co-operation and Development. There are other serious issues at stake here too: the Nato secretary-general cannot be German because it was a German last time and cannot be British, because it was British before that; by tradition it cannot be an American; the French army is not integrat-

ed into Nato. That leaves Benelux and the Scandinavians, none of whom have any politicians of the proper stature and impor- tance. One could appoint the Danish ex-for- eign minister, Uffe Ellemann-Jensen, who once chaired a discussion of the future of Bosnia while simultaneously watching a football match. But, in that case, why have a secretary-general at all?

Nato is not alone: the OECD, another international organisation with potential to do good — its influential statistical reports and surveys can persuade governments to change their spending policies — is also in need of a leader who can push the cause of good economic management. Yet the French want a French candidate (the cur- rent chairman) to head the OECD, on the grounds that he is French; America, mean- while, has decided to show North American solidarity, and has joined Canada in backing Mr Johnston, an ex-politician who has held various unremarkable ministerial jobs. At least one of the natural candidates, ex- Chancellor Lord Lawson, has largely been eliminated on the grounds that he is British. In the wake of recent EC arguments, other Europeans don't want to reward Britain with such a plum job; this anti-British pred- judice was, incidentally, also part of why Sir Leon Brittan's attempt to become president of the European Commission came to noth- ing.

Nationality politics have prevented the right man from getting the right job before. After its French president, Jacques Attali, was accused of mismanagement, it would have been intelligent to appoint an expert in East European economic reform to run the European Bank for Reconstruction and Development. Instead, another Frenchman was chosen to soothe Paris's hurt pride, and the bank continues to suffer from a sense of purposelessness and lack of direction.

These are not international beauty con- tests (`Let's give it to Miss Iceland this year'); the futures of the West's most important institutions are at stake. If west- ern governments cannot be bothered to appoint the best qualified applicants to lead Nato or the OECD, then perhaps it is time to ask whether it is worthwhile spending taxpayer's money to support them at all.