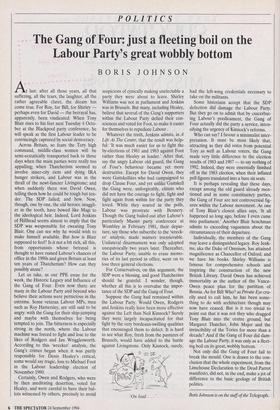 The Gang of Four: just a fleeting boil on the Labour Party's great wobbly bottom

At last: after all those years, all that suffering, all the tears, the laughter, all the rather agreeable claret, the dream has come true. For Roy, for Bill, for Shirley perhaps even for David — the betrayal has, apparently, been vindicated. When Tony Blair rises to his feet next Tuesday 4 Octo- ber at the Blackpool party conference, he will speak as the first Labour leader to be convincingly captured by social democracy.

Across Britain, so fears the Tory high command, middle-class women will be semi-ecstatically transported back to those days when the main parties were really too appalling; when Thatcherism seemed to involve inner-city riots and dying IRA hunger strikers, and Labour was in the thrall of the newt-fancier Livingstone; and when suddenly there was David Owen, telling them how he could be tough but ten- der. The SDP failed; and how. Now, though, one by one, the old heroes, snaggli- er in the tooth, have bowed like Magi to the ideological heir. Indeed, Lord Jenkins of Flil!head seems almost to imply that the SDP was wesponsible for cweating Tony Blair. One can see why he would wish to make himself available. But how is Blair supposed to feel? Is it not a bit rich, all this, from opportunists whose betrayal is thought to have ruined Labour's chances of office in the 1980s and given Britain at least ten years of Thatcherism? How can they possibly atone?

Let us take, as our PPE essay for the week, the Historic Legacy and Influence of the Gang of Four. Even now there are many in the Labour Party and beyond who believe their actions were pernicious in the extreme. Some veteran Labour MPs, men such as Roy Hattersley, are still said to be angry: with the Gang for their ship-jumping and maybe with themselves for being tempted to join. The bitterness is especially strong in the north, where the Labour machine was forced to fight and lose to the likes of Rodgers and Ian Wrigglesworth. According to this 'wrecker' analysis, the Gang's crimes began when it was partly responsible for Denis Healey's critical, some would say tragic, loss to Michael Foot in the Labour leadership election of November 1980.

Certainly, Owen and Rodgers, who were by then meditating desertion, voted for Healey, and were careful to have their bal- lots witnessed by others, precisely to avoid suspicions of cynically making unelectable a party they were about to leave. Shirley Williams was not in parliament and Jenkins was in Brussels. But many, including Healey, believe that several of the Gang's supporters within the Labour Party defied their con- sciences and voted for Foot, to make it easier for themselves to repudiate Labour .

Whatever the truth, Jenkins admits, in A Life At The Centre, that the result was help- ful: 'It was much easier for us to fight the by-elections of 1981 and 1983 against Foot rather than Healey as leader.' After that, say the angry Labour old guard, the Gang of Four's behaviour became yet more destructive. Except for David Owen, they were Gaitskellites who had campaigned to drop Clause Four, and yet unlike 'Gaitskell the Gang were, unforgivably, elitists who did not have the courage to fight, fight and fight again from within for the party they loved. While they soared in the polls, Labour was prostrate with Bennery. Though the Gang bailed out after Labour's particularly Maoist party conference at Wembley in February 1981, their depar- ture, say those who subscribe to the 'wreck- er' analysis, made matters irretrievable. Unilateral disarmament was only adopted unequivocally two years later. Thereafter, the Labour Party, unable to erase memo- ries of its last period in office, went on to lose three general elections.

For Conservatives, on this argument, the SDP were a blessing, and good Thatcherites should be grateful. I wonder, though, whether all this is to overvalue the impor- tance of the SDP and the Gang of Four.

Suppose the Gang had remained within the Labour Party. Would Owen, Rodgers and Jenkins really have been more effective against the Left than Neil Kinnock? Surely they were largely incapacitated for that fight by the very bordeaux-swilling qualities that encouraged them to defect. It is hard to see what Roy, fresh from the pastures of Brussels, would have added to the battle against Livingstone. Only Kinnock, surely, 'On lead . . had the left-wing credentials necessary to take on the militants.

Some historians accept that the SDP defection did damage the Labour Party. But they go on to admit that by exacerbat- ing Labour's predicament, the Gang of Four actually did the party a service, inten- sifying the urgency of Kinnock's reforms.

Who can say? I favour a minimalist inter- pretation. It must be most likely that, attracting as they did votes from potential Tory as well as Labour voters, the Gang made very little difference to the election results of 1983 and 1987 — to say nothing of 1992. Indeed, they were essentially finished off in the 1983 election, when their inflated poll figures translated into a bare six seats.

It is perhaps revealing that these days, except among the old guard already men- tioned and in some constituency parties, the Gang of Four are not controversial fig- ures within the Labour movement. As one of Tony Blair's closest allies says, 'It all happened so long ago, before I even came into parliament.' Another Blair henchman admits to exceeding vagueness about the circumstances of their departure.

Individually, the members of the Gang may leave a distinguished legacy. Roy Jenk- ins, aka the Duke of Omnium, has attained magnificence as Chancellor of Oxford, and we have his books. Shirley Williams is famous for comprehensive schools and inspiring the construction of the new British Library. David Owen has achieved immortality as the author of the Vance- Owen peace plan for the partition of Bosnia. As for Bill Who? as Private Eye cru- elly used to call him, he has been some- thing to do with architecture though may now have ceased. But is it too trivial to point out that it was not they who dragged Tony Blair into the centre ground, but Margaret Thatcher, John Major and the invincibility of the Tories for more than a decade? And if the Gang of Four did dam- age the Labour Party, it was only as a fleet- ing boil on its great, wobbly bottom.

Not only did the Gang of Four fail to break the mould. One is drawn to the con- clusion that the whole experiment, from the Limehouse Declaration to the Dead Parrot manifesto, did not, in the end, make a jot of difference to the basic geology of British politics.

Boris Johnson is on the staff of the Telegraph.