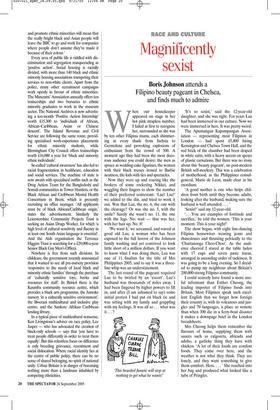 Boris Johnson attends a Filipino beauty pageant in Chelsea, and finds much to admire When our housekeeper appeared on stage in her hot pink strapless number, I failed at first to recognise her, surrounded as she was by ten other Filipina mums, each shimmering in every shade from fuchsia to Germolene and provoking explosions of enthusiasm from the crowd of 500. A moment ago they had been the most decorous audience you could desire: the men as spruce as wedding-cake figurines, the women with their black tresses ironed to Barbie neatness, the kids with ties and spectacles.

Now they were up and roaring like the brokers of some rocketing Nikkei, and waggling their fingers to show the number of their preferred contestant. ‘Luz! Luz!’ we added to the din, and tried to work it out. Was that Luz, the no. 6, the one with the cleavage? Or was she no. 5, with the smile? Surely she wasn’t no. 11, the one with the legs. No: wait — that was her, with her hair up. No. 8!

‘We want 8,’ we screamed, and waved at good old Luz, a woman who has been exposed to the full horror of the Johnson family washing and yet contrived to look little short of a million dollars. If you want to know what I was doing there, Luz was one of 11 finalists for the title of Mrs Philippines 2005, and to say it was a threeline whip was an understatement.

The last round of the pageant required Luz to be twirled by an ‘escort’. Luz’s husband was thousands of miles away. I had been fingered by higher powers to fill in, and after (I am ashamed to say) some initial protest I had put on black tie and was sitting with my family and grappling with my feelings. It was all so ... what was it... ? ‘It’s so sexist,’ said the 12-year-old daughter, and she was right. For years Luz had been immersed in our culture. Now we were immersed in hers. It was pretty weird.

The Apumangan Kapampangan Association — representing most Filipinos in London — had spent £5,400 hiring Kensington and Chelsea Town Hall, and the red brick of the chamber had been draped in white satin, with a heavy accent on sprays of plastic carnations. But there was no irony about this ‘beauty pageant’, no post-modern British self-mockery. This was a celebration of motherhood, as the Philippines consulgeneral, Mario de Leon, made clear in his exordium.

‘A good mother is one who helps children from birth until they become adults, looking after the husband, making sure the husband is well attended.... ’ ‘Sexist!’ said my 12-year-old.

‘... You are examples of fortitude and sacrifice,’ he told the women. ‘This is your moment. This is your night!’ The show began, with eight line-dancing Filipina housewives wearing jeans and rhinestones and thrusting pelvically to the ‘Chattanooga Choo-Choo’. As the audience cheered I stared at the table laden with 17 cups and seven paste tiaras, arranged in ascending order of tackiness. It was going to be a long evening. So I decided to pump my neighbour about Britain’s 200,000-strong Filipino community.

I could scarcely have found a more useful informant than Esther Cheong, the leading importer of Filipino foods into Britain. Most Filipinos speak such excellent English that we forget how foreign their country is, with its volcanoes and jungles and 70 languages, a place so remote than when 300 die in a ferry-boat disaster it makes a downpage brief in the London broadsheets.

Mrs Cheong helps them remember the flavours of home, supplying them with sauces such as calgoreta, africada and adobo, a garlicky thing they have with chicken. ‘A lot of their foods are comfort foods. They come over here, and the weather is not what they think. They are lonely, and they want something to give them comfort. Here.... ’ She reached into her bag and produced what looked like a tube of Pringles.