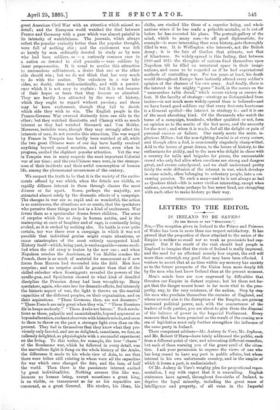 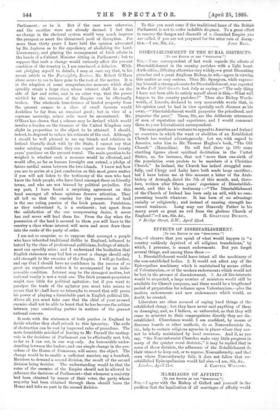 IS IRELAND TO BE SAVED?

LTo THE EDITOR OF THE "SPECTATOR."]

SIR,—The reception given in Ireland to the Prince and Princess of Wales has been in more than one respect satisfactory. It has proved that the proportion of those attached to the union of the Empire is neither so small nor so weak as pessimists had supposed. But if the result of the visit should lead people in England to imagine that the state of Ireland is really improved, and the need for an effectual remedy less urgent, the evil will more than outweigh any good that may have been effected. I venture to assert that at no time within my memory has anxiety as to the future prospects of the Union been more deeply felt by the men who best know Ireland than at the present moment.

Men's minds here are now engrossed by difficulties that threaten our Empire in distant regions; but let them not forget that the danger nearer home is far more vital to the prosperity, nay, to the very existence, of the nation. Step by step the men who proclaim themselves the enemies of England, and whose avowed aim is the disiuption of the Empire, are gaining increased political power, and, with the concurrence of the leaders of both parties, you are about to give them the disposal of the balance of power in the Imperial Parliament. Every measure that has been promised as the result of the coming new era of legislation must only further strengthen the influence of the same party in Ireland.

Three competent advisers—Mr. Aubrey de Vere, Mr. Jepluion, and Mr. Robert O'Hara—have lately addressed the public, each from a different point of view, and advocating different remedies, but each of them warning you of the grave peril of the situation. I ask your permission to express the views of one who has long ceased to have any part in public affairs, but whose interest in his own unfortunate country, and in the empire of which it forms a part, is undiminished.

Of Mr. Aubrey de Vere's weighty plea for proportional representation, I say with regret that it is unavailing. English statesmen have agreed, throughout five-sixths of Ireland, to deprive the loyal minority, including the great mass of intelligence and property, of all voice in the Imperial

Parliament ; so be it. But if the case were otherwise, and the sacrifice were not already decreed, I feel that no change in the electoral system would very much improve the prospect or avert the threatened peril of disruption. For more than thirty years I have held the opinion advocated by Mr. Jephson as to the expediency of abolishing the Lord Lieutenancy, and placing the management of Irish affairs in the hands of a Cabinet Minister sitting in Parliament ; but to suppose that such a change would seriously affect the present condition of the country is, I am convinced, a delusion. Without pledging myself to details, I may at once say that, in his recent article in the Fortnightly Review, Mr. Robert O'Hara alone seems to me to have gone to the root of the matter. It is in the adoption of some comprehensive measure which shall

speedily create a large class whose interest shall lie on the side of law and order, and in no other way, that the power wielded by the enemies of the Empire can be effectually broken. The wholesale transference of landed property from the present owners to a class of small farmers would doubtless be far from an unmixed good ; but in view of a supreme necessity, minor evils must be encountered. Mr. O'Hara has shown that a scheme may be devised which would involve a burden on the finances of the United Kingdom very slight in proportion to the object to be attained. I should, indeed, be disposed to reduce his estimate of the cost. Although I should be well pleased to see my friends and relatives in Ireland liberally dealt with by the State, I cannot say that under existing conditions they can expect more than twenty years' purchase on the present rental. The main question to be weighed is whether such a measure would be effectual, and would offer, as far as human foresight can extend, a pledge of future cordial union between the two islands. I know not how you are to arrive at a just conclusion on this most grave matter if you will not listen to the testimony of the men who best know the Irish people, who have lived amongst them on friendly terms, and who are not biassed by political prejudice. For my part, I have found a surprising agreement on this head amongst all whose opinions deserve attention. They all tell us that the craving for the possession of land is the one ruling passion of the Irish peasant. Patriotism, as they understand it, is a sentiment ; but apart from the satisfaction of the one overpowering desire, it never has and never will lead them far. From the day when the possession of the land is secured to them you will have in the country a class whose interest will more and more draw them into the ranks of the party of order.

I am not so sanguine as to suppose that amongst a people who have inherited traditional dislike to England, inflamed to hatred by the class of professional politicians, feelings of attachment can speedily arise; and I understand the hesitation that English statesmen may feel lest so great a change should only add strength to the enemies of the Empire. I will go farther, and say that I should have no confidence in the success of so great an experiment unless it be accompanied by an indispensable condition. Interest may be the strongest motive, but national vanity is not a weak one. The Irish peasant-proprietor might care little for political agitation ; but if you want to paralyse the trade of the agitator you must take means to secure that he shall have no triumphs to record that will prove his power of playing a formidable part in English political life. Above all, you must take care that the chief of your avowed enemies shall not be able to boast that he has become the arbiter between your contending parties in matters of the gravest national concern.

It rests with the statesmen of both parties in England to decide whether they shall submit to this ignominy. The evils of obstruction can be met by improved rules of procedure. The more formidable mischief of leaving to Mr. Parnell the castingvote in the decisions of Parliament can be effectually met, but, so far as I can see, in one way only. An honourable understanding between the leaders, and one simple change in the procedure of the House of Commons, will secure the object. The change would be to enable a sufficient number, say a hundred, Members to demand a second division, the result of the second division being decisive. The understanding would be that the votes of the enemies of the Empire should not be allowed to influence the decisions of Parliament—that whenever a majority had been obtained by means of their votes, the party whose majonty had been obtained through them should leave the House and take no part in the second division. To this you must come if the traditional fame of the British Parliament is not to suffer indelible disgrace. To a great effort to remove the danger and discredit of a disunited Empire you are called, if you are not prepared for the utter ruin of disrup tion.—I am, Sir, A:c., JOHN BALL.