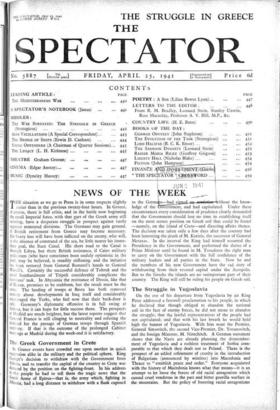 'II HE situation as we go to Press is in some respects slightly .1. easier than in the previous twenty-four hours. In Greece, of course, there is full crisis, and in the battle now- beginning the small Imperial force, with that part of the Greek army still resisting, have a desperate struggle in prospect against vastly superior armoured divisions. The Germans may gain ground. A British retirement from Greece may become necessary. But heavy loss will have been inflicted on the enemy, who will, in the absence of command of the sea, be little nearer his imme- diate goal, the Suez Canal. His short road to the Canal is through Libya, but there British resistance, if Cairo military spokesmen (who have sometimes been unduly optimistic in the past) may be believed; is steadily stiffening, and the initiative has been restored from General RommePs hands to General Wavell's. Certainly the successful defence of Tobruk and the naval bombardment of Tripoli considerably complicate the Germans' task. In Abyssinia the resistance of Dessie, like that of Keren, promises to be stubborn, but the result must be the same. The landing of troops at Basra has both removed anxiety about developments in Iraq itself and considerably enco iraged the Turks, who feel now that their back-door is safe- Germany's diplomatic offensive is in full swing at Ankara, but it can hope for little success there. The prospects at Madrid are much brighter, but the latest reports suggest that General Franco is still clinging to neutrality and refusing the demand for the _passage of German troops through Spanish territory. If that is the outcome of the prolonged Cabinet Ineesings at Madrid during the week-end it is satisfactory.