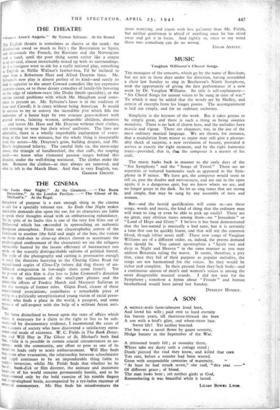 THE managers of the concerts, which go by the name of Beecham, but are not in these days under his direction, having assembled a choir last Sunday to sing in Beethoven's Ninth Symphony, took the opportunity of giving the first performance of a new work by Dr. Vaughan Williams. Its title is self-explanatory- " Six Choral Songs for unison voices to be sung in time of war." To which it may be added that the words are by Shelley, and consist of excerpts from his longer poems. The accompaniment is laid out simply, and for an ordinary orchestra.

Simplicity is the keynote of the work. But it takes genius to be simply, great, and there is such a thing as being simplex munditiis. There is no lack of charm here, and the melodies have muscle and vigour. There are elegances, too, in the use of the most ordinary musical language. We are shown, for instance, that a modulation from minor to major may still give a pleasur- able shock of surprise, a new revelation of beauty, provided it arrives at exactly the right moment, and by the right harmonic route—provided, that is, that the composer is a master of his craft.

The music harks back in manner to the early days of the "Sea Symphony" and the "Songs of Travel." There are no asperities or tortured harmonies such as appeared in the Sym- phony in F minor. We have got, the composer would seem to tell us, past the doubts and nervousness, and are out in the open again; it is a dangerous spot, but we know where we are, and no longer grope in the dark. So let us sing tunes that are strong and simple, that may be sung by any assembly of men and women.

But—and the horrid qualification will come m—are these songs, words and music, the kind of thing that the ordinary man will want to sing or even be able to pick up easily? There are no great, easy obvious tunes among them—no " Jerusalem " or "Land of Hope and Glory." I believe it has been demonstrated that the last-named is musically a bad tune, but it is certainly a tune that can be quickly learnt, and that will stir the common blood, though loftier noses sniff. These new songs of Vaughan Williams are of a different order, as, indeed, the poems demand they should be. You cannot apostrophize a "Spirit vast and deep as Night and Heaven" in the same manner as you may address Britannia ruling the waves. It seems, therefore, a pity that, since they fail- of their purpose as popular melodies, the songs are not harmonised for the voices. So they would be richer and complete. In their present form they-lack body—and a continuous unison of men's and women's voices is among the more disagreeable musical sounds. I did not wait for the Symphony ; somehow a hymn about " Freude " and human brotherhood would have jarred last Sunday.