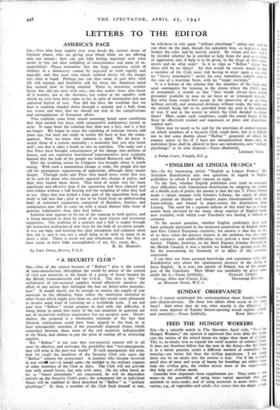 Sra,—One of the central features of "Balbus' " plea is the control of arms-manufacture throughout the world by means of the control of vital raw materials at the hands of a group of States headed by the British Commonwealth and the U.S.A. The idea is that "the withdrawal of raw-material supplies would effectively paralyse the effort of any nation that infringed the ban on heavy-arms manufac- ture." It would -clearly not be enough to restrict the supply of raw materials to the offending State unless the restriction extended to other States which might pass them on, and this would seem ultimately to involve some kind of rationing on a worldwide scale. I am nof sure how " Balbus " would propose to deal with this difficulty, it being borne in mind that many of the raw materials in question are not of exclusively military importance but are arscipitis usus. Never- theless, the proposal is a wholesome reminder of the fact that German rearmament could have been nipped in the bud, or at least substantially retarded, if the peacefully disposed States, which controlled between them most of the raw materials indispensable to the Nazis, had chosen to pay the price of cutting off or restricting

But " Balbus " is not sure that raw-material control will in all cases be effective, and envisages the possibility that "war-emergencies may still arise in the post-war world." If such emergencies did arise, bow far could the members of the Security Club rely upon the " Balbus " scheme for protection? A member who became involved in war would not—it _would seem—be entitled to the military support of other members of the Club as allies. The Club will not provide him with armed forces, but only with arms. On the other hand, so far as "heavy armaments" are concerned, he will be dependent / entirely on the Security Club's pool ; the armaments left to individual States will be confined to those described by " Balbus " as "military • playthings." If, then, a member of the Club finds himself at war,

he will-have-to rely upon "military playthings" unless and until he can draw an the pool, though his opponent may, ex hypothesi, have broken the rules and be heavily armed. By whom and how will it be decided whether he is entitled to help from the pool as a victim of aggression, and, if help is to be given, in the shape of what arma- ments and on what scale? Is it as cigar as " Balbus " claims that there will be no delay? All that would be certain would be that a member of the Club must risk having to enter upon a war with no "heavy armaments" under his own immediate control, and,•in the case of a maritime State, with no "larger warships."

It is a feature of the scheme that the members of the Club shall send contingents for training to the places where the Club's pool of armaments is stored, so that "they would always have trained personnel available to man an air force or an armoured division." But what State would feel secure in the possession of an air force without aircraft, and armoured divisions without tanks, the tanks and the aircraft being left to be provided from the pool at the outbreak of war, if and to the extent to which the Club decided to release them? How, under such conditions, could the armed forces of the State be effectively trained and organised, or plans and dispositions worked out?

There may be much to be said for the provision of central arsenals on which members of a Security Club could draw, but it is difficult not to feel some doubts about ," Balbits' " proposals of which the essence seems to be—if I have not risistmderstood them—that no individual State shall be allowed to have any armaments, save "military playthings," at its own 'disposal.—Yours obediently,