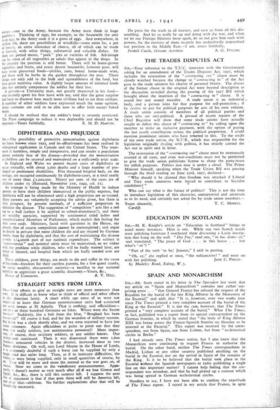 SIR,—Your reference to the T.U.C. interview with the Government asking for an amendment of the Trades Disputes Act, 1927, which includes the restoration of the "contracting out" clause must be closely watched because the change to "contracting in" of the Act gave to the trade unionist his charter of personal liberty. The abuses of the former clause in the original Act were beyond description as the discussion revealed during the passing of the 1927 Bill which brought about the insertion of the "contracting in" clause. It is sound law and sound morality. A trade union is an industrial body, and a person joins for that purpose for self-protection ; if he desires to pay for political purposes he acts of his own volition. A trade union consists of members of all political parties and those who are anti-political. A perusal of recent reports of the Chief Registrar will show that some trade unions have actually sought to defeat this clause of "contracting in" by calling upon the member to make an inclusive payment, with the option of paying the last yearly contribution -minus the political proportion. I could mention prominent unions who have resorted to this. To the credit of my own trade union, the N.U.R., which was responsible for the legislation originally dealing with politics, it has strictly carried the Act out in spirit and iii letter.

The restoration of the "contracting out" clause must be strenuously resisted at all costs, and even war-conditions must not be permitted to give the trade union politicians license to abuse the party-truce for selfish purposes. Politics just now is under a cloud. The Prime Minister himself, speaking when the Trade Union Bill was passing through the third reading on June 23rd, 5927, declared-

" Why should it be claimed that freedom was attacked if Liberal and Tory trade unionists were forced to contribute to Socialist candidates?"

Who can say what is the future of politics? This is not the time to introduce legislation of this character, controversial and uncertain as to its need, and certainly not asked for by trade union members.—