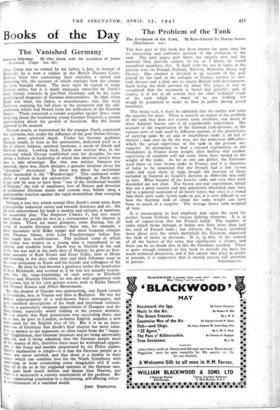 Orro ZAREK was so named by his father, a Jew, in honour of Bismarck; he is now a soldier in the British Pioneer Corps. Between these two contrasting facts stretches a varied and interesting life, the account of-which explains how the change has been brought about. The story must be typical of many German exiles, but it is made unusually attractive by Zarek's many literag contacts in pre-Nazi Germany and by his acute psychological diagnosis of German abnormalities. In 1898, when Zarek was born, his. father, a manufacturer, was, like most Germans, enjoying his full share in the prosperity and the self- confidence which had flowed from the unification of the German Empire. There remained a certain prejudice against Jews; some misgiving about the headstrong young German Emperor, a certain apprehension about the growth of Socialism. But the future

appeared to be assured. •

German ,youth, as represented by the younger Zarek, continued this optimism, but, under the influence of the poet Stefan George, gave it more spiritual depth. Under his Socratic guidance German youth, at least in the universities, dedicated itself to a life of classic balance, spiritual harmony, a union of Greek and German ideals, Looking back, Zarek now realises that, in the command which George established over his disciples, he was setting a fashion in leadership of which less idealistic people were later to take advantage. But that was neither foreseen nor intended; there was, Zarek declares, a genuine idealism about the "Georgian" movement. So there was about the movement which succeeded it, the " Wanderviigel." This embraced wider drdep of youth than the universities. Although, as Zarek says, it can now be seen to have been "one of the intellectual heralds of Nazism," the cult of manliness, love of Nature and devotion to traditional German music and custom was, before 1914, a praiseworthy reaction against the vapid materialism then sweeping over Germany.

Perhaps it was this which turned Otto Zarek's mind away from a prosperous industrial career and towards literature and art. On his own achievement his book is modest and reticent; it mentions his successful play, The Emperor Charles V, but says much more about the people he met as a consequence of his interest in the drama. There are many glimpses, some fleeting, but all vivid, of notable German writers; there was, for example, a short encounter with Rillce, longer and more frequent contacts with Thomas Mann, with Lion Feuchtwanger before Jew Siss made him world-famous. The political scene of which the writer was witness as a young man is reproduced in an original and readable form. Zarek was at Munich at the end of the last war and in the early days of Nazism; he gives us first- hand accounts of Kurt Eisner and Ernst Toiler, later of Hitler and Goering in the days when they and their followers went to the same restaurant as Zarek and his friends and colleagues of the theatre. By then he had become a pr,oducer under the inspiration of Max Reinhardt, and assisted at, if he was not actually respon- sible for, the stage-beginnings of such artists as Elisabeth Bergner and Marlene Dietrich; he was also well acquainted with less known, but in his view greater actors, such as Kithe Dorsch and Werner Krauss and Albert Bassermann.

But the shadow of Nazigm was approaching, and Zarek turned to journalism, first in Vienna and then in Budapest. He was the Balkan correspondent of a well-known Swiss newspaper; and gives excellent descriptions of his fresh and important contacts. He has a particularly eloquent appreciation of Hungary and the Hungarians, especially worth reading at the present moment. He saw clearly that Nazi penetration was succeeding there, and 103 as last, he goes to London, re-learns. English, acquires a new enthusiasm for the English way of life. But it is as an inter- pretation of Germany that Zarek's final chapter has most value. It is an answer to the argument, so often heard from the " impar- tial" Englishman, that German literature and art being universally admired, and it being admitted that the 'German people must 13e the source of this therefore there must be widespread opposi- rn to the fraud and murder perpetrated by the Hitler regime. Larek's explanation is simple—it is that the German people as a whole are never satisfied, and that there is a duality in their nature which can combine love for the Ninth Symphony with eland,ming -or even committing every imaginable evil if com- taarkied to do so In the supposed interests of the German race.

s goes back much farther and deeper than Nazism, and

,ms goes is necessarily a cursory examination of the problem. Bu. It is a stimulating conclusion tø a fascinating, self-effacing volum- reminiscences of a vanished World.