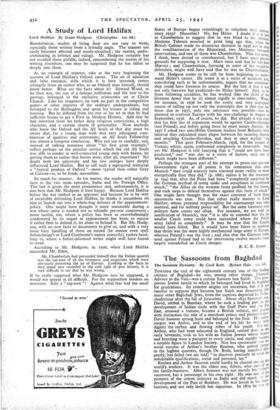 A Study of Lord Halifax -

BIOGRAPHICAL studies of; living men are not easy to write, especially those written from a friendly angle. The manner too easily becomes affected and mealy-mouthed the matter, undis- criminating in defence and eulogy. Mr. Hodgson certainly has not avoided these pitfalls; indeed, remembering the merits of his writing elsewhere, one may be surprised that he has fallen so deeply into them.

As an example of manner, take at the very beginning the account of Lord Halifax's Oxford career. The air of adulation and false romance, with which it is here invested, comes strangely from an author who, as an Oxford man himself, should know better. What are the facts about it? Edward Wood, as he then was, the son of a famous nobleman and the heir to his peerage, belonged to the exclusive, aristocratic set at Christ Church. Like his congeners, he took no part in the competitive games or other interests of the ordinary undergraduate, but belonged to the Bulfmgdon and spent his leisure in riding and hunting. But he differed from the rest of his set in that he had sufficient brains to get a First in Modern History. Add that he had inherited from his father deep religious convictions, a high character, and a certain charm of personality. Now anybody who knew the Oxford and the All Souls of that day must be aware that, for a young man with that very infrequent com- bination of qualities and connexions, an All Souls Fellowship was almost a foregone conclusion. Why not say so candidly, and, instead of talking nonsense about "his first great triumph," reflect perhaps on the peculiar service which the old All Souls was able to render to well-connected young men with brains, by getting them to realise that brains were, after all, important? No doubt both the university and his two colleges have deeply influenced Lord Halifax. But to call such a segregated aristocrat a "typical product of Oxford "—more typical than either Grey or Curzon—is, to be frank, moonshine. • So much for manner. As for matter' the reader will naturally turn to the two main episodes, India and the Foreign Office. The last is given the most prominence and, unfortunately, it is just here that Mr. Hodgson is least happy. Because Lord Halifax before the war ranked as an appeaser and because he is by way of invariably defending Lord Halifax, he thinks it incumbent on him to launch out into a whole-hog defence of the appeasement- policy. One might have thought it more seasonable during a war where unity is needed not to rekindle pre-war controversy ; more tactful, too, where a policy has been so overwhelmingly condemned by its sequel as appeasement has been, to excuse it rather than to defend it, let alone to belaud it. But Mr. Hodg- son, with no new facts or documents to give us, and with a very loose hazy handling of those on record (he cannot even spell Schuschnigg's or Lord Cranborne's names correctly), rushes head- long in, where a better-informed writer might well have feared to tread.

According to Mr. Hodgson, in 1936, when Lord Halifax succeeded Mr. Eden,

Mr. Chamberlain had persuaded himself-that the Italian quarrel was the tap-root of all the bitterness and suspicions which were obviously poisoning the air of Europe. Looking at the facts as they stand now recorded in the cold light of past history, it is very difficult to say that he was wrong.

If he really supposed what Mr. Hodgson says he supposed, it would not appear at all difficult. For the supposition borders on nonsense. Italy a " tap-root "! Against what fear had the small

States of Europe begun tremblingly to refurbish their armour since 1933? Mussolini? No, but Hitler. I doubt if it is just to Chamberlain to suggest that he was blind to the obvious Madame Tabouis asserted in print long ago that, when th British Cabinet made its disastrous decision in 1936 not to stop the remilitarisation of the Rhineland, two Ministers favoured intervention, and one of them was Chamberlain. This has never I think, been denied or corroborated; but I have some priva4 grounds for supposing it true. Marx once said that he was keit Marxist ; and Chamberlain, listening to some of his would-be defenders, might well have said that he was no Chamberlainite Mr. Hodgson seems to be still far from beginning to under- stand Hitler's career. He treats it as a series of accidents and, considering each to be unforeseeable, argues that no statesman- ship could have foreseen its course. But the fact is that it via: not only foreseen but predicted—by Hitler himself. And, so far from following accidents, he has worked (like the child of the German Army that he is) almost rigidly to time-tables When, for instance, in 1936 he took the costly and very unpopular course of calling up not only the conscripts due in that year but those due in 1937, only one inference was possible—that he planned to confront Europe with his war-challenge in August or September, 1938. As, of course, he did. But already it was dear that his first line of expansion would be against Czecho-Slovakia (not Poland); and before going there he must secure Austria. In 1937 I asked two anti-Hitler German leaders from Bohemia what interval they calculated must elapse between his securing Austria and attacking Czecho-Slovakia, and they at once replied "six months." This gave -February-March, 1938, for the seizure of Vienna; which, again, conformed completely to time-table. And yet Mr. Hodgson is still fancying that it "could not have been predicted,"- and "was due to a series of factors, each one of which might have been different."

Perhaps the strangest part of his attempt to prove our pre-war Government right at all points is his contention that after Munich "they could scarcely have rearmed more fwiftly or more energetically than they did." (p. 186); unless it be the statement (P. 194) that, after the Poles had been "completely surprised by the German method of using tanks and aeroplanes in combined attack," "the Allies on the western front profited by the lesson, and took steps to defend themselves against this form of attack." One might have thought that the exact converse of both these statements was true. Not that either really matters to Lord Halifax; whose personal responsibility for rearmament was only nominal, and for military policy nil. But the same looseness over military facts comes out often. For instance, we are told (in justification of Munich), that "it is idle to contend that the far smaller Czech army could have succeeded where the Polish army failed so completely." It may be true that the Czechs would have failed. But it would have been fairer to mention that theirs was the most highly mechanised large army in Europe, whereas Poland's was the least ; and also that the German tanks used against Poland had in the intervening twelve months been largely remodelled on Czech designs. R. C. K. ENSOIL