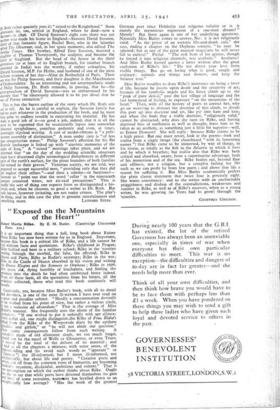 "Exposed on the Mountains of the Heart"

h is an important thing that a full, long book about Rainer Maria Rilke has now been written for us in England. Important, itaillse this book is a critical life of Mee, and a life cannot be told without facts and quotations. Rilke's childhood in Prague; hike bullied and bent in a military school; nice in the 'nineties Siding through the morbid, the false, the affected; Rilke in Russia and Paris; Rilke as Rodin's secretary; Rilke in the war; Rilkc in the Castle of Muzot absorbed in his vision and writing the Duino Elegies and the Sonnets to Orpheus ; Rilke in 1926, ifty years old, dying horribly of leuchremia, and finding the entrance into the death he had often celebrated bitter indeed. ham all these facts, all the quotations from his letters, all the evidence collected, those who read this book cautiously will benefit.

Cautiously, yes, because Miss Butler's book, with all its detail lad devotion, is one of the most ill-written I have ever read on great and peculiar subject. "Hardly a consummation devoutly to be wished from his point of view, but rather a vicious circle, i not a reductio ad absurdum." That is the average of Miss Butler's manner. She frequently uses the idiom of the familiar quotation "If one wished to put it unkindly with apt allitera- lion's artful aid, one might distinguish■the Rilke of Frau Blalur's Maul from the Rilke of the Worpswede diary by the epithets poulis'n and girlish," or "he will not abide our question." NW many consequences follow from such writing. A edral made of old allotment sheds, we too much forget, I,enuld not be thkequal of Wells or Gloucester, or even Truro.

would be the total of the defects of its material ; and kl find in all the chapters a niixture, with some sense, of the w,gh-sounding and (to avoid such words ast " ignorant " or ninera.re ") the ill-informed; but I mean ill-informed, not tholastIcally, but about life and poetry. "Creative poets and tusts, cut off from the common roots of humanity, are becoming elan2kedly eccentric, disdainful, ambitious and remote." That is 'ue assumption on which the author thinks about Rilke. Ought It't she to say that while poets have divested themselves (to gain znd 5) of some restraints, hutnity has levelled down to an exceptionally low average? "Has the work of the greatest

German poet since Holderlin real religious validity or is it merely the mysterious expression of a one-man dream?" Merely! But there again is one of her underlying questions. Naturally Miss Butler comes to answer, No: it is not religiously "As the priest of an esoteric life-and-death cult," she says, ending a chapter on the Orpheus sonnets, "he may be ignored; but as one of the great musical magicians he will never fail to enthral." Pitiful. "The real bent of his genius, though he forced it into religious channels, was aesthetic." Aesthetic! And Miss Butler herself quotes a letter written after the great exaltation of Rilke's life : "Do not divert your love from visible things. But go on loving what is good, simple and ordinary: animals and things and flowers, and keep the balance true."

Miss Butler troubles to deny Rilke's insistence on being a lover of life, because he insists upon death' and the creativity of art; because of his symbolic angels and his fierce climb up to the "peak of pure denial," past the last village of language and the last homestead of feeling, to exposure "on the mountains of the heart." Then, with all the history of poets to correct her, why go on worrying to abstract the doctrine of this climb, to divide this poet up into doctrine and art, like pig into ham and loin; and when she finds that a viable doctrine, "religiously valid," cannot be abstracted, why does she turn on Rilke, and having deprived him of earthiness as well as thought, leave him to be taken as an aesthete, as something just a little bit superior—well, to Ernest Dowson? She will reply : because Rilke claims to be a high priest. But one must retort, look at the poems—look and realise from a single image (the churchyard "with its lamenting names ") that Rilke came to be immersed, by way of things, in his .vision, as totally as the fish in the Atlantic in which it lives and by which it breathes; but realise also that Rilke was both critical and absorbed, aware, from a superrnarine advantage, both of his immersion and of the sea. Rilke bodies out, beyond flaw and silliness, not a religion, but a complex feeling for life such as we can profit by from few poets ; and above that life a reason for suffering it. But Miss Butler academically prefers the plain classic statement that twice four is precisely eight. She wants consistency : and so she writes with an uncharitable priggishness and disdain of the contradictions, weaknesses and vanities in Rake, as well as of Rilke's excesses, when as a young writer, he was growing (as Yeats had to grow) through the 'nineties.