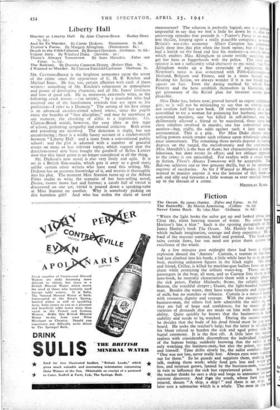 MR. CurrroN,BRocx is the brightest newcomer upon the scene of the crime since the appearance of C. H. B. Kitchin and Michael Innes. He has, too, certain affinities with each 1 these- writers : something of Mr. Kitchin's refinement in atmosphere and power of developing character, and all Mr. Innes' liveliness and love of good talk. He is, moreover, extremely witty, as the following .crack attests . —(an article), " by a journalist who had received one of the handsomest rewards that are open to his profession—I refer to a Deanery." The setting of his first clime ' is an advanced co-educational school where, since the pupils enjoy the benefits of "free discipline," and may be anywhere at any moment, the checking of alibis is a nightmare. * Mr. Clutton-Brock avoids, however, the easy jibes at this type of school, preferring sympathy and rational criticism Both arson and poisoning are involved. The detection is slight, but not unconvincing ; there is a wildly funny account of a cricket-match between "Liberty Hall and a team from .a conventional public . school : and the plot is adorned with a number of graceful .esiays on more or less relevant topics,- which suggest that the detection-novel may have bought the goodwill of Belles Lettres now that this latter genre is no longer considered at all the thing.

Mr. Dickson's new novel is also very lively and agile. It is set in a British film-studio, which gets it away to a good start; unlike certain other writers who have used this setting, Mr. Dickson has an accurate knowledge of it, and weaves it thoroughly into his plot. The moment Miss Stanton turns up at the Albion Films studio to write the scenario of her best-selling novel, Desire, events move fast and furious; a carafe full of vitriol is discovered on one set; vitriol is poured down a speaking-tube at Miss Stanton on another. Why is somebody picking on this harmless girl? And who has stolen the shots of naval

manoeuvres?, The solution is perfectly logical; aria it s perha ungrateful to say that we feel a little let down by it, after unnerving episodes that precede it. ■ Traitor's Purse is an excel lent thriller, hinging upon a really plausible conspiracy to wr Britain's war-time economy. Albert Campion has penetrat fairly deep into_this plot when the book opens; but he has a: had a knock on the head and lost his memory—a simple dev' which. enables Miss Allingham to create terrific suspense, get her hero at loggerheads with the police. The ch:ef co spirator is not a sufficiently solid character to my mind ; but Ali Allingham works up a fine crescendo of excitement. Mr Newman's novel is also concerned with Fifth-columnists- Holland, Belgium and France, and in a more factual way Reading his fiction, we always wonder if it is not based four square on fact. Even the -daring method by which Pa Pontivy and the hero establish themselves in Germany, get possession of the Keitel plan for invasion seems qui plausible.

Miss Duke has, before now; proved herself an expert criminol gist; so it will not be misleading to say that an ostrich coo not swallow half her new book. Of twelve members of a ju assembled to try a woman for poisoning her husband, two hat committed murders, one has killed in self-defence, one h deliberately allowed a friend to be murdered, three have h close relatives involved in murder, one has committed ar another—but, really, the odds against such a jury must

astronomical. This is a pity. For Miss Duke shows story telling powers which render such reliance upon wholesale ,:oincid

ence unnecessary. The remaining three novels depend in varyin degrees on the turgid, the melodramatic and the sentimen Miss Meredith's is the best of them; her characterisation is ra laborious, but does create its effect; and her oblique approa to the crime is not Unjustified. For readers with a sweet t in fiction, There's Always Tomorrow will be acceptable. Th Balcony achieves one or Mei genuine thrills, but at an enormou expense of saccharine. As for I Wanted to Murder, if ever wanted to• murder anyone it was the heroine of this book soft and silly and tiresome a little woman as ever snarled herse up in the 'threads of a crime.