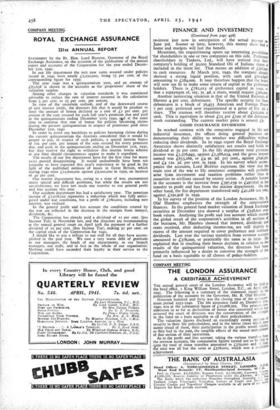 STATEMENT by the Rt. Hon. Lord Bicester, Governor of the Royal Exchange Assurance, on the occasion of the publication of the annual report and accounts of the Corporation for the year ended Decem- ber 31St, 1940.

In our life department the nett new sums assured under policies issued in 1940 were nearly £2,250,000, being 75 per cent, of the corresponding figure for 1939. The year 1940 was a quinquennium year, and an amount of £85,658 is shown in the' accounts as the proprietors' share of the valuation surplus. Among other changes in valuation standards it was considered advisable to reduce the rate of interest assumed in the calculation from 3 per cent. to 21 per cent, per annum. In view -of the uncertain outlook, and of the downward course of nett interest yields, the directors felt that it would be prudent to limit the amount of bonus declared to a rate of £1 per cent, per annum of the sum assured for each full year's premium due and paid in the quinquennium ending December 31st1 1940, ad at the same time to continue that rate of bonus for policies becoming claims during the present quinquennium in respect of premiums paid since December 31st, 1940.

In order to avoid any hardships to policies becoming claims during the current quinquennium the directors considered that it would be proper to pay, in respect of such policies, a special interim bonus of ios. per cent, per annum of the sum assured for every premium due, and paid, in the quinquennium ending on December 31st, 1940, but they reserve the right to withdraw this interim bonus scheme at any time should circumstances appear to make it expedient.

The results of our fire department have for the first time for many years proved disappointing. It would undoubtedly have been too sanguine to have expected this year's experience to be good in the light of the published estimate of losses in Great Britain, which during 1940 were L12,600,0°0 against £9,000,000 in 1939, an increase of 40 per cent.

Our marine department has, owing to a state of war, encountered many special and difficult problems, but while the results are not unsinsfactory, we have not made any transfer to our general profit and loss account this year.

Our accident department has had a satisfactory year. The premium income of £1,078,000 represents a reduction which was fully antici- pated under war conditions, but a profit of £160,000, including nett interest, was realised.

In the general profit and loss account the conditions created by the war are reflected in the decrease in the receipts from interest, dividends &c.

I should like to pay a tribute to our staff for all they have accom- plished in the past year. We owe a very warm debt of gratitude to our managers, the heads of our departments, to our branch managers, our staffs, and in fact to the whole of our organisation. Nothing could have exceeded their loyalty in their service to the Corporation.