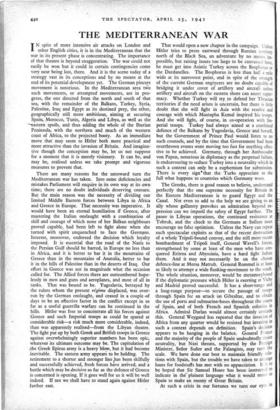 IN spite of more intensive air attacks on London and other English cities, it is in the Mediterranean that the war in its present phase is concentrating. The importance of that theatre is beyond exaggeration. The war could not easily be won but it could in certain contingencies come very near being lost, there. And it is the scene today of a strategy vast in its conceptions and by no means at the end of its potential development yet. The German pincers movement is notorious. In the Mediterranean area two such movements, or attempted movements, are in pro- gress, the one directed from the north and south of that sea, with the remainder of the Balkans, Turkey, Syria, Palestine, Iraq and Egypt as its destined prey, the other, geographically still more ambitious, aiming at securing Spain, Morocco, Tunis, Algeria and Libya, as well as the --eastern spoils, and thus adding the whole of the Iberian Peninsula, with the northern and much of the western coast of Africa, to the projected booty. As an immediate move that may seem to Hitler both more practical and more attractive than the invasion of Britain. And imagina- tive though the conception may be, let us not suppose for a moment that it is merely visionary. It can be, and may be, realised unless we take prompt and vigorous measures to prevent that.

There are many reasons for the untoward turn the Mediterranean war has taken. Into some deficiencies and mistakes Parliament will enquire in its own way at its own time; there are no doubt individuals deserving censure. But the main reason was the necessity of dividing our limited Middle Eastern forces between Libya in Africa and Greece in Europe. That necessity was imperative. It would have been an eternal humiliation if Greece, after mastering the Italian onslaught with a combination of skill and courage of which none of her Balkan neighbours proved capable, had been left to fight alone when she turned with spirit unquenched to face the Germans. Interest, moreover, endorsed the decision which loyalty imposed. It is essential that the road of the Nazis to the Persian Gulf should be barred, in Europe no less than in Africa, and it is better to bar it in the mountains of Greece than in the mountains of Anatolia, better to bar it in the hills of Palestine than in the deserts of Iraq. Our effort in Greece was not in magnitude what the occasion called for. The Allied forces there are outnumbered hope- lessly in men and guns and aeroplanes, and most of all in tanks. That was bound to be. Yugoslavia, betrayed by the rulers whom the present regime displaced, was over- run by the German onslaught, and ceased in a couple 'of days to be an effective factor in the conflict except in so far as a useful guerrilla warfare can be continued in the hills. Hitler was free to concentrate all his forces against Greece and such Imperial troops as could be spared at considerable risk—a risk much more considerable, indeed, than was apparently realised—from the Libyan theatre. The fight put up by both Greek and British troops in Greece against overwhelmingly superior numbers has been epic, whatever its ultimate outcome may be. The capitulation of the Greek Epirus army is a heavy blow, but it had become inevitable. The eastern army appears to be holding. The retirement to a shorter and stronger line thas been skilfully and successfully achieved, fresh forces have arrived, and a battle which may be decisive so far as the defence of Greece is concerned is opening. If it goes well for us it will be well indeed. If not we shall have to stand again against Hitler farther east. That would open a new chapter in the campaign. Unless Hitler tries to press eastward through Russian territory north of the Black Sea, an adventure by no means im- possible, but raising issues too large to be canvassed here, he must get into Asiatic Turkey across the Bosphorus or the Dardanelles. The Bosphorus is less than half a mile wide at its narrowest point, and in spite of the strength of the current German engineers are no doubt capable of bridging it under cover of artillery and aircraft unless artillery and aircraft on the eastern shore can assert supre- macy. Whether Turkey will try to defend her Thracian territories if the need arises is uncertain, but there is little doubt that she will fight in Asia with the resolve and courage with which Mustapha Kemal inspired his troops. And she will fight, of course, in co-operation with Im- perial troops. Turkey had always aimed at a combined defence of the Balkans by Yugoslavia, Greece and herself, but the Government of Prince Paul would listen to no such counsels, and by the time that Government had been overthrown events were moving too fast for anything effec- tive to be achieved. Germany, through her Ambassador von Papen, notorious in diplomacy as the perpetual failure, is endeavouring to seduce Turkey into a neutrality which in such a context can only be a euphemism for submission. There is every sign' that the Turks appreciate to the full what happens to countries which Germany woos.

The Greeks, there is good reason to believe, understand perfectly that the one supreme necessity for Britain in the Eastern Mediterranean is to guard Egypt and the Canal. Not even to add to the help we are giving to an ally whose gallantry provokes an admiration beyond ex- pression can we imperil the safety of Egypt further. The pause in Libyan operations, the continued resistance at I I Tobruk, and the check to the Germans at Sollum must encourage no false optimism. Unless the Navy can repeat such spectacular exploits as that of the recent destruction of a whole Tripoli-bound convoy, and the still more recent bombardment of Tripoli itself, General Wavell's forces, strengthened by some at least of the men who have con- quered Eritrea and Abyssinia, have a hard fight before them. Arid it may not necessarily be on the chosen defence-line at Mersa Matruh. General Rommel is at least as likely to attempt a wide flanking-movement to the south. The whole situation, moreover, would-be metamorphosed if the diplomatic pressure which Hitler is exerting at Vichy and Madrid proved successful. It has a short-range and a long-range purpose—to secure the passage of troops through Spain for an attack on Gibraltar, and to obtain the use of ports and submarine-bases throughout the coasts of Spain, and of both French and Spanish colonies in Africa. Admiral Darlan would almost certainly concede this. General Weygand has repeated that the invasion of Africa from any quarter would be resisted but invasion in such a context depends on definition. Spain's deLision appears to be hanging in the balance. General F-anco and the majority of the people of Spain undoubtedly desire neutrality, but Nazi threats, supported by the Fc:eign Minister, Senor Sutler and the Falangists, may turn the scale. We have done our best to maintain friendly ela" dons with Spain, but the trouble we have taken to arr.inge loans for foodstuffs has met with no appr.eciation. It :s to be hoped that Sir Samuel Hoare has been instructed to indicate in the- plainest language what it would mean to Spain to make an enemy of Great Britain. At such a crisis in our fortunes we turn our eye,: in hope and appreciation across the Atlantic. America may have been slow to rouse—we were moving at no breakneck speed ourselves three years ago—but the point has been reached when America has been carried in sight of war, and the President is being called on from every side for a further lead. What help we may look for in the Atlantic is indicated by an article from America on a later page. What hope we may look for in the Middle East is indicated by President Roosevelt's declaration that the Red Sea is no longer a combat-zone, and his diversion of American shipping thither. All that will help immensely, but will it help in time? There can be no immediate remedy for our tragic inferiority in air-power in the Middle East. Superiority in quality, both of pilots and machines, is doing something, but it cannot do everything, to even the balance. For the next six months we have to produce, still more intensively, and to endure still more grimly. It will not be easy going, but it will be easier out of all com- parison than life after a Nazi victory. That is the con- clusive word in every argument.