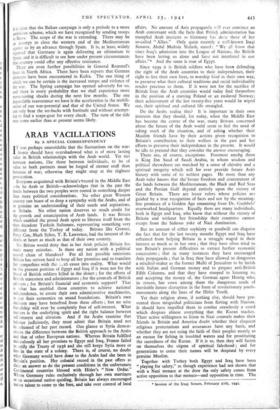 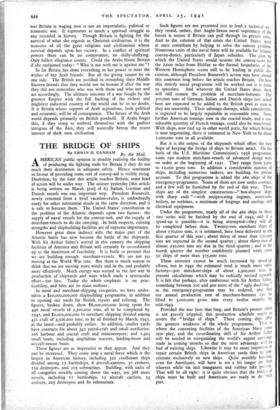 By A SPECIAL CORRESPONDENT

I T was perhaps unavoidable that the fluctuations on the war- fronts should have overshadowed what is of more lasting value in British relationships with the Arab world. Yet ties between nations, like those between individuals, to be of value to both partners must be forged of sterner stuff than fortunes of war; otherwise they might snap at the slightest provocation.

Everyone acquainted with Britain'stecord in the Middle East —be he Arab or British—acknowledges that in the past the bonds between the two peoples were rooted in something deeper than mere political considerations. No other great Western country can boast of so deep a symputhy with the Arabs, and of so genuine an understanding of their needs and aspirations, as Britain. No other nation deserves so much credit for the growth and emancipation of Arab lands. It was Britain which enabled the proud Arab spirit to liberate itself from the -then decadent Turkish Sultanate, representing something very different from the Turkey of today. Britons like Cromer, Percy Cox, Mark Sykes, T. E. Lawrence, had the interest of the Arabs at heart as much as that of their own country.

No Briton would deny that in her Arab policies Britain has madz many mistakes. Is there any nation with a political record clean of blunders? For all her possible omissions Britain has striven hard to keep all her promises and to translate her sympathies with the Lab cause into reality. What would be the present position of Egypt and Iraq if it were not for the blood of British soldiers killed in the desert ; for the efforts of British statesmen and administrators ; for the counsels of British advisers ; for Britain's financial and economic support? That is what has enabled those countries to achieve national independence, to create th;ir own administrative machineries, to put their economics on sound foundations. Britain's own interests- may have benefited from these efforts ; but no wise friendship will ever be completely free of self-interest. What matters is the underlying spirit and the right balance between self-interest and altruism. And if the Arabs examine that balance judiciously, they must admit that Britain need not be ashamed of her past record. One glance at Syria demon- strates the difference between the British approach to the Arabs and that of other European nations. Whereas Britain fulfilled meticulously all her promises to Egypt and Iraq, France failed to ratify the Treaty of 1936 and she still keeps Syria more or less in the state of a colony. There is, of course, no doubt What Germany would have done to the Arabs had she been in Britain's position. Her colonial record in the past offers as Clear an answer as do the present 'conditions in the unfortunate Continental countries blessed with Ilider's "New Order" Where Germany rules exclusively through her own martinets or an occasional native quisling, Britain has always encouraged native talent to come to the fore, and take over .control of local affairs. No amount of Axis propaganda will ever convince an Arab conversant with the facts that British administration has trampled Arab interests as Germany has done those of her so-called "Allies." Only quite recently a v:ell-known Iraqi Senator, Abdul Muhsin Shilash, stated : "We all know that since Iraq's admission into the League of Nations, the British have been letting us alone and have not interfered in our affairs."* And the same is true of Egypt.

Since 1939 it is British soldiers who have been defending the right of the Arab countries to their independence, their right to live their own lives, to worship God in their own way, to preserve what their cultural traditions and racial individuality render precious to them. If it were not for the sacrifice of British lives the Arab countries would today find themselves in the position of a starving Poland or an enslaved Norway; their achievement of the last twenty-five years would be wiped out, their spiritual and cultural life strangled.

Do the Arabs realise this? It is important in their own interests that they should, for today, when the Middle East has become the centre of the war, many Britons concerned about the future of the Arab world seem to feel the need of taking stock of the situation, and of asking whether their Muslim friends have by their actions given recognition to Britain's contribution to their welfare in the past and her efforts to preserve their independence in the present. It would be idle to pretend that they consider the answer encouraging.

There are, of course, exceptions. Foremost amohg them is King Ibn Saud of Saudi Arabia, in whom wisdom and political shrewdness are matched by a sense of chivalry and a spiritual integrity which will for ever provide future Arab history with some of its noblest pages. He more than any Arab ruler knows that the-future freedom and contentment of the lands between the Mediterranean, the Black and Red Seas and the Persian Gulf depend entirely upon the victory ot Great Britain. There are lesser rulers whose policies are guided by a true recognition of facts and not by the meaning- less promises of a Golden Age emanating from Dr. Goebbels' overworked headquarters. Equally there are many individuals, both in Egypt and Iraq, who know that without the victory of Britain and without her friendship their countries cannot escape from the hideous yoke of Nazi domination.

But no amount of either sophistry or goodwill can disguise the fact that for the last twenty months Egypt and Iraq have refrained from helping Britain in a struggle waged in their interest as much as in her own ; that they have often tried to use Britain's present difficulties to extract further economic • concessions ; that in many instances they have encouraged Axis propaganda ; that in Iraq they have allowed so dangerous a mischief-maker as the former Mufti of Jerusalem to be lavish with Italian and German money and to prepare anti-British Fifth Columns, and that they have stooped to listening to, and accepting the money of, the German agent Hentig who, in- return, has sown among them the dangerous seeds of inevitable future disruption in the form of revolutionary youth- -movements along the lines of the Hitler Youth.

Yet their religion alone, if nothing else, should have pre- vented those misguided politicians from flirting with Nazism. It should have impelled them to combat ceaselessly a creed which despises almost everything that the Kuran teaches. Their active willingness to listen to Nazi counsels makes their friends in Britain and America doubt whether their eloquent religious protestations and assurances have any basis, and whether they are not using the faith of their peoples merely as an excuse for fishing in troubled waters and for prostituting the sacredness of the Kuran. If it is so, then they will fasten on themselves the stigma of spiritual falsehood ; and for generations to come their names will be despised by every genuine Muslim.

Together with Turkey both Egypt and Iraq have been "playing for safety," as though experience had not shown that with a Nazi menace at the door the only safety comes from active opposition to that menace—and opposition in time. The -

war Britain is waging now is not an imperialistic, political or economic war. It represents as much a spiritual struggle as any recorded in history. Though Britain is fighting for the survival of what she regards as Christian civilisation, it is the treasures of all the gkeat religions and civilisations whose survival depends upon her victory. In a conflict of spiritual powers there can be no compromise, no shilly-shallying. Only fullest allegiance counts. Could the Arabs blame Britain if she exclaimed today: "Who is not with me is against me"?

So far Britain has done everything in her power to meet the wishes of her Arab friends. But all the giving cannot be on one side. The British are justified in reminding their Middle Eastern friends that they would not be human if after the war they did not remember who was with them and who not and act accordingly. The ultimate outcome of a war fought by the greatest Empire with the full backing of the richest and mightiest industrial country of the world can be in no doubt. It is Britain whose support of Arab aspirations, both political and economic, will be of consequence. The future of the Arab world depends primarily on British goodwill. If Arabs forget this, if they stoop to embroil themselves with the godless intrigues of the Axis, they will assuredly betray the truest interest of their own civilisation.