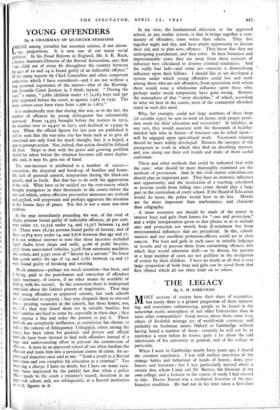 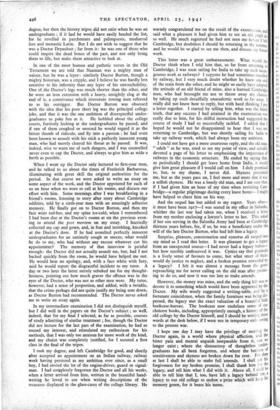 /[ sections' of society have their share of eccentrics, but surely there is a greater proportion of these interest- ing, and sometimes embarrassing, people to be found in the somewhat exotic atmosphere of our older Universities than in most other communities? Good stories about them, some true?, others of doubtful mintage are of world-wide currency; and probably no freshman enters Oxford or Cambridge without having heard a number of them: certainly he will not be in residence a term before he knows quite a lot about the odd inhabitants of his university in general, and of his college in particular.

When I went to Cambridge nearly forty years ago, I shared the common experience. I was told endless anecdotes of the strange habits and behaviour of heads of houses, dons, pro- fessors and lecturers ; but I was particularly warned about a certain don, whom I may call Dr. Burton, the librarian of my own college, and a lecturer in-the course of study I had elected to take. Doctor Burton was a mediaeval historian of the pro- foundest erudition. He had not in his time taken a first-class degree, but then the history tripos did not exist when he was an undergraduate ; if it had he would have easily headed the list, for he revelled in parchments and palimpsests, mediaeval lore and monastic Latin. But I do not wish to suggest that he was a Doctor Dryasdust ; far from it: he was one of those who could inspire the dead bones of the past, and not only bring them to life, but make them attractive to look at.

In one of the most human and pathetic verses in the Old Testament we are told that Naaman was a mighty man of valour, but he was a leper: similarly Doctor Burton, though a mighty historian, was a cripple, and I believe he was hardly less sensitive to his infirmity than any leper of his untouchability. One of the Doctor's legs was much shorter than the other, and he wore an iron extension with a heavy, unsightly clog at the end of it, a contrivance which irreverent rowing men referred to as his outrigger. But Doctor Burton was obsessed with the idea that his poor short leg was the principal college joke, and that it was the one ambition of disrespectful under- graduates to poke fun at it. He hobbled about the college courts, furtively looking at the undergraduates he passed, and if one of them coughed or sneezed he would regard it as the bitten thumb of ridicule, and fly into a passion ; he had even been known to assault with his stick a perfectly innocent young man, who had merely cleared his throat as he passed. It was, indeed, wise to warn me of such dangers, and I was counselled never even to cap the Doctor, and always to give him as wide a berth as possible.

When I went up the Doctor only lectured to first-year men, and he talked to us about the times of Frederick Barbarossa, illuminating with great skill the original authorities for the period. In due course we were asked to write an essay on some aspect of the work, and the Doctor appointed for each of us an hour when we were to call at his rooms, and discuss our effort with him. Some mornings after I was breakfasting in a friend's rooms, listening to story after story about Cambridge oddities, told by a sixth-year man with an amazingly adhesive memory. He finally got on to Doctor Burton, and then my face went red-hot, and my spine ice-cold, when I remembered I had been due at the Doctor's rooms at six the previous even- ing to attend the post mortem on my essay. I hurriedly collected my cap and gown, and, in fear and trembling, knocked at the Doctor's door. If he had assaulted perfectly innocent undergraduates for an untimely cough or sneeze, what would he do to me, who had without any excuse whatever cut his appointrnent? The memory of that interview is painful enough: the Doctor did not actually assault me, but, had I not backed quickly from the room, he would have helped me out. He would hear no apology, and, with a face white with fury, said he would report the disgraceful incident to my tutor. A day or two later the latter sternly rebuked me for my thought- lessness, pointing out how much graver the offence was in the eyes of the Doctor, who was not as other men were. My tutor, however, had a sense of proportion, and added, with a twinkle, that the crime perhaps did not quite justify my being sent down, as Doctor Burton had recommended. The Doctor never asked me to write an essay again.

In my intermediate examination I did not.distinguish myself, but I did well in the papers on the Doctor's subject ; so well, indeed, that for my final I selected, as far as possible, courses of study admitting of similar treatment ; for, though the Doctor did not lecture for the last part of the examination, he had so roused my interest, and stimulated my enthusiasm for his methods, that I was only too anxious for more work of the kind, and my choice was completely justified, for I secured a first class in the final of the tripos.

I took my degree, and left Cambridge for good, and shortly after accepted an appointment on an Ihdian railway, railway work having persisted as my ambition ever since, as a small boy, I had envied the lot of the engine-driver, guard or signal- man. I had conapletely forgotten the Doctor and all his works, when a letter arrived from him, written in the beautiful hand- writing he loved to use when writing descriptions of the treasures displayed in the glass-cases of the college library. He warmly congratulated me on the result of the examination, and said what a pleasure it had given him to see an old pupil do so well. He much regretted he had not seen me before I left Cambridge, but doubtless I should be returning in the autunio, and he would be so glad to see me then, and discuss my future work.

This letter was a great embarrassment. What would the Doctor think when I told him that, so far from returning to Cambridge, I was soon sailing for India to take up such incon- gruous work as railways? I suppose he had sometimes travelled by railway, but I very much doubt whether he knew one end of the train from the other, and he might so easily have adopted the attitude of an old friend of mine, also a learned Cambri4': man, who had besought me not to throw away my chance by taking up such dreadfully unacademic work so far away. I really did not know how to reply, but with hard thinking I put a letter together. I started by telling him, what was the literal truth, that any success I had attained in the examination was really due to him, for his skilful instruction had suggested the course of study I had so successfully tackled. I added that I hoped he would not be disappointed to hear that I was not returning to Cambridge, but was shortly sailing for India to take up railway work, which had always been my ambition.

I could not have got a more courteous reply, and the old man, " sahib " as he was, tried to see my point of view, and actually devoted a page of his letter to emphasising the importance of railways in the economic structure. He ended by saying that, as periodically. I should get leave home from India, it would give him great pleasure if I would call on him I duly promised to, but, to my shame, I never did. Shyness prevented me, but as the years pass on, I feel more and more that it was a selfish shyness. He was a lonely old man, and I am sure that, if I had given him an hour of my time when revisiting Cam- bridge—a regular pilgrimage during every leave home— I might have helped to cheer him on his way.

And the sequel has but added to my regret. Years after— it must have been 1917—I was seated in my office in Salonika, whither the last war had taken me, when I received a letter from my mother enclosing a lawyer's letter to her. This asked if her son serving in the Salonika Army had been at Cambridge thirteen years before, for, if so, he was a beneficiary under the will of the late Doctor Burton, who had left him a legacy.

Surprise, pleasure, consternation and remorse all surged into my mind as I read this letter. It was pleasant to get a legacy from an unexpected source—I had never had a legacy before— but how terribly undeserved it was. Cynics say that gratitude is a lively sense of favOurs to come, but what sneer of theirs would do justice to neglect, and a broken promise rewarded DY a legacy? I felt it was almost a message from the grave reproaching me for never calling on the old man after promis- ing to do so, and now it was too late to make amends.

However, the money was mine, and the only thing_ left was to devote it to something which would have been approved by the Doctor. My wife wisely suggested a writing-table, and by a fortunate coincidence, when the family furniture was being dis- persed, the legacy met the exact valuation of a beauti:',11 little bookcase-bureau. The bookcase now enshrines some of our choicest books, including, appropriately enough, a history of the old college by the Doctor himself, and I should be writinr, these words at the desk below, if I were not in temporary exik owing to the preSent war.

I hope one day I may have the privilege of meeting the Doctor again, in a world where physical affliction, and the bitter pain and mental anguish inseparable from it, cart DO longer exist ; where the discourtesy of thoughtless under; graduates has all been forgotten, and where the barriers o sensitiveness and shyness are broken down for ever. For then at last I shall be able to make full amends. I shall 2.4; his forgiveness for my broken promise, I shall thank him for the legacy, and tell him what I did with it. Above all, I shall be able to tell him that I, too, have left a legacy 'behind me, a legacy to our old college to endow. a 'prize which will keep his memory green, for it bears his name.