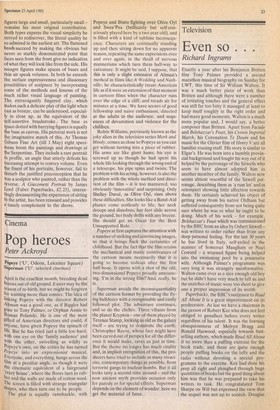 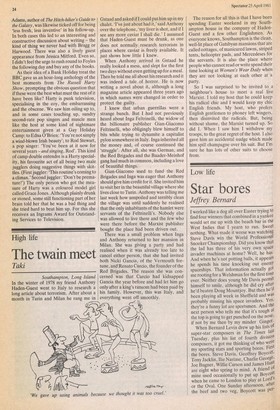 Exactly a year after his Benjamin Britten film Tony Palmer provided a second marathon musical biography on Sunday for LWT, this time of Sir William Walton. It was a much better piece of work than Britten and although there were a number of irritating touches and the general effect was still far too bitty it managed at least to keep itself roughly in the right order and had many good moments. Walton is a much more popular and, I would say, a better composer than Britten. Apart from Facade and Belshazzar's Feast, his Crown Imperial March, his Coronation Te Deum and his music for the Olivier film of Henry V are all familiar rousing stuff. His story is similar to Elgar's. He was born into a humble provincial background and fought his way out of it helped by the patronage of the Sitwells who seem to have almost adopted him as another member of the family. Walton now seems almost resentful of the Sitwell patronage, describing them as 'a rum lot' and in retrospect showing little affection towards them. He certainly achieved his object of getting away from his native Oldham but suffered consequently from not being quite sure where he was or what he ought to be doing. Much of his work — for example, Belshazzar's Feast which was commissioned by the BBC from an idea by Osbert Sitwell — was written to order rather than from any deep personal feeling. For the last 30 years he has lived in Italy, self-exiled in the manner of Somerset Maugham or Noel Coward — a wizened figure being helped into the swimming pool by a possessive wife. Although Palmer's programme was very long it was strangely uninformative. Walton came over as a nice enough old boy but he didn't have very much to tell us and the snatches of music were too short to give one a proper impression of its worth.

Paperbacks, the BBC's successor to Read All About It is a great improvement on its predecessor. At last we have a chairman in the person of Robert Kee who does not feel obliged to genuflect before every writer regardless of his talent. It was the fawning obsequiousness of Melvyn Bragg and Ronald Harwood, especially towards bestselling authors, which made Read All About It no more than a puffing exercise for the book trade, and there are quite enough people puffing books on the telly and the radio without devoting a special programme to the exercise. Kee had done his prep all right and ploughed through huge quantities of books but the good thing about him was that he was prepared to take his writers to task. He congratulated Tom Sharpe on Wilt but expressed the view that the sequel was not up to scratch. Douglas Adams, author of The Hitch-hiker's Guide to the Galaxy, was likewise ticked off for being 'less fresh, less inventive' in his follow-up. In both cases this led to an interesting and constructive discussion about writing — the kind of thing we never had with Bragg or Harwood. There was also a lively guest appearance from Jessica Mitford. Even so, I didn't feel the urge to rush round to Foyles the following day and buy any of the books.

As their idea of a Bank Holiday treat the BBC gave us an hour-long anthology of the best moments from The Russell Harty Show, prompting the obvious question that if these were the best what must the rest of it have been like? Harty is punk television, specialising in the coy, the embarrassing and the obscene. We saw him oiling up to, and in some cases touching up, sundry second-rate pop singers and muscle men like the host at some kind of nightmare entertainment given at a Gay Holiday Camp: to Edna O'Brien: 'You're not simply a wind-blown Irish beauty'; to Rod Stewart, a pop singer: 'You've been at it now for several years —and singing, Rod'. This kind of camp double entendre is a Harty speciality, his favourite act of all being two male jugglers doing suggestive things with skittles. (First juggler: 'This routine's coming to a climax.' Second juggler: 'Don't be premature!) The only person who got the measure of Harty was a coloured model girl called Grace Jones. Although plainly drunk or stoned, some still functioning part of her brain told her that he was a bad thing and she tried hard to beat him up. For this she receives an Ingrams Award for Outstanding Services to Television.