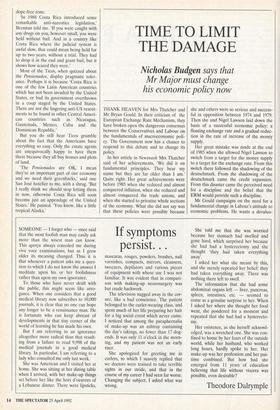 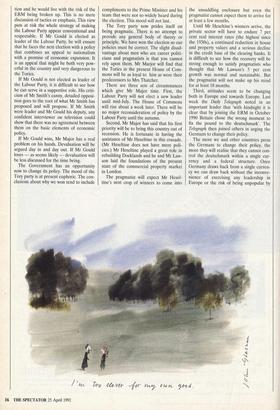 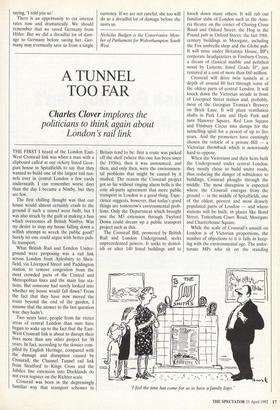 TIME TO LIMIT THE DAMAGE

THANK HEAVEN for Mrs Thatcher and Mr Bryan Gould. In their criticism of the European Exchange Rate Mechanism, they have broken open the dangerous consensus between the Conservatives and Labour on the fundamentals of macroeconomic poli- cy. The Government now has a chance to respond to this debate and to change its policy.

In her article in Newsweek Mrs Thatcher said of her achievements, 'We did it on fundamental principles. They bear my name but they are far older than I am.' Quite right. Her great achievements were before 1985 when she reduced and almost conquered inflation, when she reduced and almost conquered the trade unions, and when she started to privatise whole sections of the economy. What she did not say was that these policies were possible because

she and others were so serious and success- ful in opposition between 1974 and 1979. Then she and Nigel Lawson laid down the basis of a successful economic policy: a floating exchange rate and a gradual reduc- tion in the rate of increase of the money supply.

Her great mistake was made at the end of 1985 when she allowed Nigel Lawson to switch from a target for the money supply to a target for the exchange rate. From this switch there followed the shadowing of the deutschmark. From the shadowing of the deutschmark came the credit expansion. From this disaster came the perceived need for a discipline and the belief that the ERM would provide such a discipline.

Mr Gould campaigns on the need for a fundamental change in Labour's attitude to economic problems. He wants a devalua- tion and he would live with the risk of the ERM being broken up. This is no mere discussion of tactics or emphasis. This view puts at risk the whole strategy of making the Labour Party appear conventional and respectable. If Mr Gould is elected as leader of the Labour Party, he will ensure that he faces the next election with a policy that combines an appeal to nationalism with a promise of economic expansion. It is an appeal that might be both very pow- erful in the country and very dangerous to the Tories.

If Mr Gould is not elected as leader of the Labour Party, it is difficult to see how he can serve in a supportive role. His criti- cism of Mr Smith's canny, detailed opposi- tion goes to the root of what Mr Smith has proposed and will propose. If Mr Smith were leader and Mr Gould his deputy, any confident interviewer on television could show that there was no agreement between them on the basic elements of economic policy.

The Government has an opportunity now to change its policy. The mood of the Tory party is at present euphoric. The con- clusions about why we won tend to include compliments to the Prime Minister and his team that were not so widely heard during the election. This mood will not last.

The Tory party now prides itself on being pragmatic. There is no attempt to provide any general body of theory or principle. We have won the election so our policies must be correct. The slight disad- vantage about men who are career politi- cians and pragmatists is that you cannot rely upon them. Mr Marjor will find that the Tories in the present House of Com- mons will be as loyal to him as were their predecessors to Mrs Thatcher.

There are three sets of circumstances which give Mr Major time. First, the Labour Party will not elect a new leader until mid-July. The House of Commons will rise about a week later. There will be no major reconsideration of policy by the Labour Party until the autumn.

Second, Mr Major has said that his first priority will be to bring this country out of recession. He is fortunate in having the assistance of Mr Heseltine in this crusade. (Mr Heseltine does not have mere poli- cies.) Mr Heseltine played a great role in rebuilding Docklands and he and Mr Law- son laid the foundations of the present state of the commercial property market in London.

The pragmatist will expect Mr Hesel- tine's next crop of winners to come into the unsaddling enclosure but even the pragmatist cannot expect them to arrive for at least a few months.

Until Mr Heseltine's winners arrive, the private sector will have to endure 7 per cent real interest rates (the highest since the 1930s), a continued reduction in house and property values and a serious decline in the credit base of the clearing banks. It is difficult to see how the recovery will be strong enough to satisfy pragmatists who thought that Mr Lawson's 5 per cent growth was normal and sustainable. But the pragmatist will not make up his mind for at least 18 months.

Third, attitudes seem to be changing both in Europe and towards Europe. Last week the Daily Telegraph noted in an important leader that 'with hindsight it is clear that by joining the ERM in October 1990 Britain chose the wrong moment to fix the pound to the deutschmark'. The Telegraph then joined others in urging the Germans to change their policy.

The more we and other countries press the Germans to change their policy, the more they will realise that they cannot con- trol the deutschmark within a single cur- rency and a federal structure. Once Germany draws back from a single curren- cy we can draw back without the inconve- nience of exercising any leadership in Europe or the risk of being unpopular by saying, 'I told you so.'

There is an opportunity to cut interest rates now and dramatically. We should remember that we saved Germany from Hitler. But we did a dreadful lot of dam- age to Germany before saving her. Ger- many may eventually save us from a single currency. If we are not careful, she too will do us a dreadful lot of damage before she saves us.

Nicholas Budgen is the Conservative Mem- ber of Parliament for Wolverhampton South West.