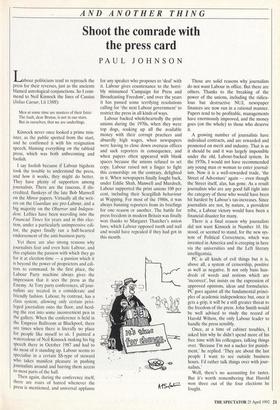 Shoot the comrade with the press card

Labour politicians tend to reproach the press for their reverses, just as the ancients blamed astrological conjunctions. So I com- mend to Neil Kinnock the lines of Cassius (Julius Caesar, I.ii 138ff): Men at some time are masters of their fates: The fault, dear Brutus, is not in our stars, But in ourselves, that we are underlings.

Kinnock never once looked a prime min- ister, as the public spotted from the start, and he confirmed it with his resignation speech, blaming everything on the tabloid press, which was both unbecoming and foolish.

I say foolish because if Labour bigshots took the trouble to understand the press, and how it works, they might do better. They have plenty of supporters among journalists. There are the raucous, if dis- credited, flunkeys of the late Bob Maxwell on the Mirror papers. Virtually all the writ- ers on the Guardian are pro-Labour, and a big majority on the Observer and Indepen- dent. Lefties have been weeviling into the Financial Times for years and in this elec- tion, under a particularly unimpressive edi- tor, the paper finally ran a half-hearted endorsement of the anti-business party.

Yet there are also strong reasons why journalists fear and even hate Labour, and this explains the passion with which they go for it at election-time — a passion which it is beyond the power of proprietors and edi- tors to command. In the first place, the Labour Party machine always gives the impression that it sees the press as the Enemy. At Tory party conferences, all jour- nalists are treated in a considerate and friendly fashion. Labour, by contrast, has a class system, allowing only certain privi- leged journalists onto the floor, and herd- ing the rest into some inconvenient pen in the gallery. When the conference is held in the Empress Ballroom at Blackpool, there are times when there is literally no place for people like myself to sit. I painted a watercolour of Neil Kinnock making his big speech there in October 1987 and had to do most of it standing up. Labour seems to specialise in a certain SS-type of steward who takes manifest pleasure in pushing journalists around and barring them access to most parts of the hall.

Then again, during the conference itself, there are roars of hatred whenever the press is mentioned, and universal applause for any speaker who proposes to 'deal' with it. Labour gives countenance to the horri- bly misnamed 'Campaign for Press and Broadcasting Freedom', and over the years it has passed some terrifying resolutions calling for 'the next Labour government' to restrict the press in all kinds of ways.

Labour backed wholeheartedly the print unions during the 1970s, when they were top dogs, soaking up all the available money with their corrupt practices and absurdly high wages, when newspapers were having to close down overseas offices and sack reporters in consequence, and when papers often appeared with blank spaces because the unions refused to set copy. Labour raised not a finger to fight this censorship: on the contrary, delighted in it. When newspapers finally fought back, under Eddie Shah, Maxwell and Murdoch, Labour supported the print unions 100 per cent, including their Scargillish behaviour at Wapping. For most of the 1980s, it was always banning reporters from its briefings for one reason or another. The battle for press freedom in modern Britain was finally won thanks to Margaret Thatcher's union laws, which Labour opposed tooth and nail and would have repealed if they had got in this month. Those are solid reasons why journalists do not want Labour in office. But there are others. Thanks to the breaking of the power of the unions, including the ridicu- lous but destructive NUJ, newspaper finances are now run in a rational manner. Papers tend to be profitable, managements have enormously improved, and the money goes (on the whole) to those who deserve it.

A growing number of journalists have individual contracts, and are rewarded and promoted on merit and industry. That is as it should be and it was largely impossible under the old, Labour-backed system. In the 1970s, I would not have recommended any young man or woman to enter journal- ism. Now it is a well-rewarded trade, 'the Street of Adventure' again — even though the Street itself, alas, has gone. As a result journalists who are any good fall right into the category of those who would have been hit hardest by Labour's tax-increases. Since journalists are not, by nature, a provident tribe, a Labour victory would have been a financial disaster for many.

There is a final reason why journalists did not want Kinnock in Number 10. He stood, or seemed to stand, for the new sys- tem of Political Correctness, which was invented in America and is creeping in here via the universities and the Left literary intelligentsia.

PC is all kinds of evil things but it is, above all, a system of censorship, positive as well as negative. It not only bans hun- dreds of words and notions which are `incorrect', but insists on the expression of approved opinions, ideas and formularies.

PC goes against all the fundamental princi- ples of academic independence but, once it gets a grip, it will be a still greater threat to the freedom of the press. John Smith would be well advised to study the record of Harold Wilson, the only Labour leader to handle the press sensibly.

Once, at a time of cabinet troubles, I asked him why he didn't spend more of his free time with his colleagues, talking things over. 'Because I'm not a sucker for punish- ment,' he replied. 'They are about the last people I want to see outside business hours. I'd rather talk things over with jour- nalists.'

Well, there's no accounting for tastes. But it's worth remembering that Harold won three out of the four elections he fought.