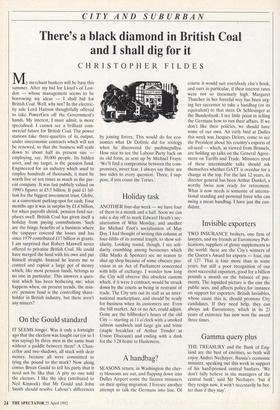 On the Gould standard

IT SEEMS longer. Was it only a fortnight ago that the election was fought out (or so I was saying) by three men in the same boat without a paddle between them? A Chan- cellor and two shadows, all stuck with dear money, because all were committed to tying the pound to the mark? Now along comes Bryan Gould to tell his party that it need not be like that. A pity no one told the electors. I like the idea (attributed to Neil Kinnock) that Mr Gould and John Smith should resolve Labour's differences by joining forces. This would do for eco- nomics what Dr Dolittle did for zoology when he discovered the pushmepullyu. How nice to see the Labour Party back on its old form, as sent up by Michael Frayn: `We'll find a compromise between the com- promises, never fear. I always say there are two sides to every question. Three, I sup- pose, if you count the Tories.'