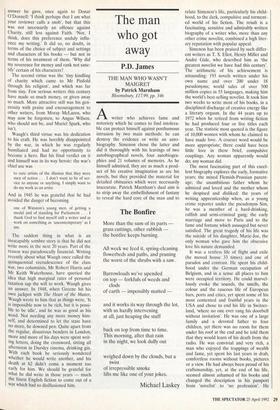 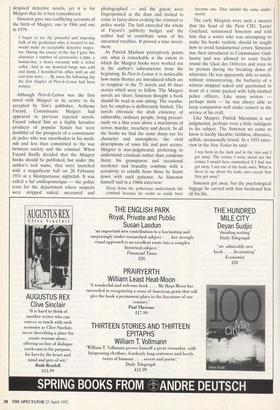 The man who got away

P.D. James THE MAN WHO WASN'T MAIGRET by Patrick Marnham Bloomsbury, £17.99, pp. 346 Awriter who achieves fame and notoriety which he comes to find intolera- ble can protect himself against posthumous intrusion by two main methods: he can destroy the evidence or write an auto- biography. Simenon chose the latter and did it thoroughly with his leavings of two autobiographical novels, four autobiogra- phies and 21 volumes of memoirs. As he himself admitted, they are as much a prod- uct of his creative imagination as are his novels, but they provided the material for detailed obituaries which were necessarily inaccurate. Patrick Marnham's dual aim is to strip away the embellishment of fantasy to reveal the hard core of the man and to

relate Simenon's life, particularly his child- hood, to the dark, compulsive and torment- ed world of his fiction. The result is a fascinating, sensitive and admirably written biography of a writer who, more than any other crime novelist, combined a high liter- ary reputation with popular appeal.

Simenon has been praised by such differ- ent writers as T. S. Eliot, Henry Miller and Andre Gide, who described him as 'the greatest novelist we have had this century'. The arithmetic of his achievement is astqunding: 193 novels written under his own name and over 200 under 18 pseudonyms; world sales of over 500 million copies in 55 languages, making him the world's best-selling novelist. It took him two weeks to write most of his books, in a disciplined discharge of creative energy like a literary orgasm. In the 44 years up to 1972 when he retired from writing fiction he had produced four or five titles each year. The statistic most quoted is the figure of 10,000 women with whom he claimed to have made love. A coarser word would be more appropriate; there could have been little love in these brief, compulsive couplings. Any woman apparently would do; any woman did.

The most fascinating part of this excel- lent biography explores the early, formative years; the mixed Flemish-Prussian parent- age; the unambitious father whom he admired and loved and the mother whom he despised and disliked; the years of writing apprenticeship when, as a young crime reporter under the pseudonym Sim, he was a member of a hard-drinking, raffish and semi-criminal gang; the early marriage and move to Paris and to the fame and fortune which assuaged but never satisfied. The great tragedy of his life was the suicide of his daughter, Marie-Joe, the only woman who gave him the obsessive love his nature demanded.

It was a restless life of flight and exile (he moved house 33 times) and one of paradox and contrast. He spent his child- hood under the German occupation of Belgium, and in a sense all places to him were occupied territory. He could marvel- lously evoke the sounds, the smells, the colour and the raucous life of European bars, ports and cities, yet spent some of his most contented and fruitful years in the USA and chose to end his life in Switzer- land, 'where no one ever rang his doorbell without invitation'. He was one of a large family and a devoted father to four children, yet there was no room for them under his roof at the end and he told them that they would learn of his death from the radio. He was convivial and very rich, a man who enjoyed the trappings of wealth and fame, yet spent his last years in drab, comfortless rooms without books, pictures or a view. He had always been proud of his craftsmanship, yet, at the end of his life, seemed almost ashamed of his books and changed the description in his passport from 'novelist' to `no profession'. He despised detective novels, yet it is for Maigret that he is best remembered.

Simenon gave two conflicting accounts of the birth of Maigret, one in 1966 and one in 1979:

I began to see the powerful and imposing hulk of the gentleman who, it seemed to me, would make an acceptable detective inspec- tor. During the course of the day I gave this character a number of accessories; a pipe, a howler-hat, a heavy overcoat with a velvet collar. And as my deserted barge was cold and damp, I furnished his office with an old cast-iron stove ... By noon the following day the first chapter of Pier-le-Legion had been written.

Although Pietr-le-Lefton was the first novel with Maigret at its centre to be accepted by Sim's publisher, Artheme Fayard, Commissaire Maigret had appeared in previous rejected novels. Fayard valued Sim as a highly lucrative producer of popular fiction but were doubtful of the prospects of a commissaire de police who was unorthodox in his meth- ods and less than committed to the war between society and the criminal. When Fayard finally decided that the Maigret books should be published, but under the author's real name, they were launched with a magnificent ball on 20 February 1931 at a Montparnasse nightclub. It was called a hal anthropometique — the police term for the department where suspects were stripped naked, measured and photographed — and the guests were fingerprinted at the door and invited to come in fancy-dress evoking the criminal or police world. The ball exceeded the whole of Fayard's publicity budget and the author had to contribute some of his unearned royalties. It proved a wise invest- ment.

As Patrick Marham perceptively points out, what is remarkable is the extent to which the Maigret books were worked out in the author's subconscious from the beginning. In Pietr-le-Lefton it is noticeable how many themes are introduced which are to reappear in the 75 novels and 49 short stories which were to follow. The Maigret novels are short; Simenon thought a book should be read in one sitting. The vocabu- lary he employs is deliberately limited. The novels chronicle the drab existence of vulnerable, ordinary people, living precari- ously on a thin crust above a maelstrom of terror, murder, treachery and deceit. In all the books we find the same sharp eye for character and atmosphere, the vivid descriptions of town life and port scenes. Maigret is non-judgmental, preferring to understand criminals rather than condemn them; his grumpiness and occasional insolence and brutality combine with a sensitivity to rebuffs from those he hunts down with such patience. As Simenon himself said in a 1960s interview:

Deep down the policeman understands the criminal because he could so easily have become one. They inhabit the same under- world.

The early Maigrets were such a success that the head of the Paris CID, Xavier Guichard, summoned Simenon and told him that a writer who was attempting to make his books realistic should be taught how to avoid fundamental errors. Simenon was then introduced to Commissaire Guil- laume and was allowed to. roam freely round the Quai des Orfevres and even to be present during the breaking down of witnesses. He was apparently able to watch, without remonstrating, the barbarity of a witness stripped naked and questioned in front of a room packed with fully-clothed police officers. Like many writers perhaps most — he was always able to keep compassion well under control in the service of his craft.

Like Maigret, Patrick Marnham is not judgmental, perhaps even a little indulgent to his subject. The Simenon we come to know is hardly likeable; faithless, obsessive, selfish, occasionally brutal. In a 1953 inter- view in the New Yorker he said:

Simenon got away, but the psychological luggage he carried with him burdened him all his life.