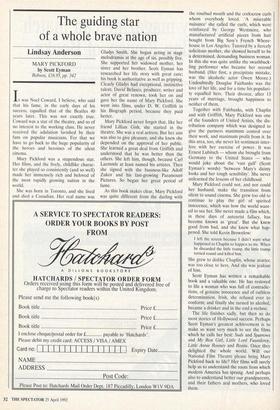 The guiding star of a whole brave nation

MARY PICKFORD by Scott Eyman Robson, £16.95, pp. 342 It was Noel Coward, I believe, who said that his fame, in the early days of his success, equalled that of the Beatles 40 years later. This was not exactly true. Coward was a star of the theatre, and so of no interest to the working class. He never received the adulation lavished by their fans on popular musicians. For that we have to go back to the huge popularity of the heroes and heroines of the silent cinema.

Mary Pickford was a stupendous star. Her films, and the lively, childlike charac- ter she played so consistently (and so well) made her immensely rich and beloved of the most rapidly growing nation in the world.

She was born in Toronto, and she lived and died a Canadian. I ler real name was

Gladys Smith. She began acting in stage melodramas at the age of six, possibly five. She supported her widowed mother, her sister and her brother. Scott Eyman has researched her life story with great care; his book is authoritative as well as gripping. Clearly Gladys had exceptional, instinctive talent. David Belasco, producer, writer and actor of great renown, took her on and gave her the name of Mary Pickford. She went into films, under D. W. Griffith in his Biograph period, because they paid better.

Mary Pickford never forgot that, like her friend Lillian Gish, she started in the theatre. She was a real actress. But her aim was also to give pleasure, and she knew she depended on the approval of her public. She learned a great deal from Griffith and understood that he was better than the others. She left him, though, because Carl Laemmle at least named his artistes. Then she signed with the business-like Adolf Zukor and his fast-growing Paramount Pictures. So began her great period of fame.

As this book makes clear, Mary Pickford was quite different from the darling with the rosebud mouth and the corkscrew curls whom everybody loved. `A miserable nuisance' she called the curls, which were reinforced by George Westmore, who manufactured artificial pieces from hair bought from Big Susy's French Whore- house in Los Angeles. Tutored by a fiercely solicitous mother, she showed herself to be a determined, demanding business woman. In this she was quite unlike the swashbuck- ling performer who became her second husband. (Her first, a precipitate mistake, was the alcoholic actor Owen Moore.) Undoubtedly Douglas Fairbanks was the love of her life, and for a time his populari- ty equalled hers. Their divorce, after 13 years of marriage, brought happiness to neither of them.

Together with Fairbanks, with Chaplin and with Griffith, Mary Pickford was one of the founders of United Artists, the dis- tribution company which was designed to give the partners maximum control over their work, and maximum profit from it. In this area, too, she never let sentiment inter- fere with her exercise of power. It was Ernest Lubitsch — whom she brought from Germany to the United States — who would joke about the `vast gulf(Scott Eyman's words) `between Mary's dainty looks and her tough sensibility'. She never unlearned the lessons of her childhood.

Mary Pickford could not, and nor could her husband, make the transition from silent to sound cinema. She grew too old to continue to play the girl of spirited innocence, which was how the world want- ed to see her. She never made a film which, in these days of autcurist fallacy, has become known as 'great'. But she knew good from bad, and she knew what hap- pened. She told Kevin Brownlow:

She grew to dislike Chaplin, whose avarice was too close to hers. And she was jealous of him.

Scott Eyman has written a remarkable book and a valuable one. He has restored to life a woman who was full of contradic- tions, of genuine innocence and of ruthless determination. Irish, she refused ever to conform; and finally she turned to alcohol, became a drinker and in the end a recluse.

The life finishes sadly, but then so do most stories of Hollywood success. Perhaps Scott Eyman's greatest achievement is to make us want very much to see the films which he calls her best: Suds and Sparrows and My Best Girl, Little Lord Fauntleroy, Little Annie Rooney and Rosita. Once they delighted the whole world. Will our National Film Theatre please bring Mary Pickford back to life? Her films will surely help us to understand the roots from which modern America has sprung. And perhaps also to understand better our grandparents, and their fathers and mothers, who loved them.