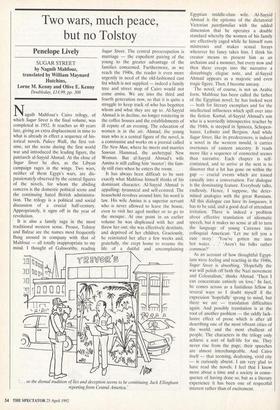 Two wars, much peace, but no Tolstoy

Naguib Mahfouz's Cairo trilogy, of which Sugar Street is the final volume, was completed in 1952. It reaches us 40 years late, giving an extra displacement in time to what is already in effect a sequence of his- torical novels. Palace Walk, the first vol- ume, set the scene during the first world war and introduced the leading figure, the patriarch al-Sayyid Ahmad. At the close of Sugar Street he dies, as the Libyan campaign rages in the wings. Two wars, neither of them Egypt's wars, are dis- passionately observed by the central figures of the novels, for whom the abiding concern is the domestic political scene and the continuing hated British administra- tion. The trilogy is a political and social discussion of a crucial half-century. Appropriately, it signs off in the year of revolution.

It is also a family saga in the most traditional western sense. Proust, Tolstoy and Balzac are the names most frequently flung around in company with that of Mahfouz — all totally inappropriate to my mind. I thought of Galsworthy, reading

Sugar Street. The central preoccupation is marriage — the expedient pairing of the young to the greater advantage of the families concerned. Furthermore, as we reach the 1940s, the reader is even more urgently in need of the old-fashioned cast list which is not supplied — indeed a family tree and street map of Cairo would not come amiss. We are into the third and fourth generation now, so that it is quite a struggle to keep track of who has begotten whom and what they are up to. Al-Sayyid Ahmad is in decline, no longer roistering in the coffee houses and the establishments of ill repute of an evening. The education of women is in the air. Ahmad, the young man who is a central figure of the novel, is a communist and works on a journal called The New Man, where he meets and marries Sawsan Hammad, the archetypal New Woman. But al-Sayyid Ahmad's wife Amina is still calling him `master'; the fam- ily still rises when he enters the room.

It has always been difficult to be sure exactly what Mahfouz himself thinks of his dominant character. Al-Sayyid Ahmad is appalling: tyrannical and self-centred. The household revolves around him; his word is law. His wife Amina is a superior servant who is never allowed to leave the house, even to visit her aged mother or to go to the mosque. At one point in an earlier volume he was displeased with her and threw her out; she was effectively destitute, and deprived of her children. Graciously, he reinstated her after a few weeks and, gratefully, she crept home to resume the life of a dutiful and uncomplaining

. . so the dismal tradition of lies and deception seems to be continuing. Jack Ellingham reporting from Central America.'

Egyptian middle-class wife. Al-Sayyid Ahmad is the epitome of the dictatorial Victorian paterfamilias with the added dimension that he operates a double standard whereby the women•of his family are effectively caged while he himself runs mistresses and makes sexual forays wherever his fancy takes him. I think his creator means to present him as an archaism and a monster, but every now and then there creeps into the narrative a disturbingly elegiac note, and al-Sayyid Ahmad appears as a majestic and even tragic figure. Then, I become uneasy. .

The novel, of course, is not an Arabic form. Mahfouz has been called the father of the Egyptian novel; he has looked west — both for literary exemplars and for the intellectual influences which spill over into the fiction. Kamal, al-Sayyid Ahmad's son who is a worriedly introspective teacher by the 1940s, is steeped in Spinoza, Schopen- hauer, Leibnitz and Bergson. And while Sugar Street, like its predecessors, is indeed a novel in the western mould, it carries overtones of eastern ancestry. It reads more like a sequence of connected scenes than narrative. Each chapter is self- contained, and to arrive at the next is to discover that a lot has gone on within the gap — crucial events which are tossed casually into a conversation. For dialogue is the dominating feature. Everybody talks, endlessly. Hence, I suppose, the deter- mined analogies with the great Russians. All this dialogue can have its longueurs, it has to be said, and a good deal of attendant irritation. There is indeed a problem about effective translation of idiomatic speech, but it makes no sense at all to turn the language of young Cairenes into colloquial American: 'Let me tell you a cute story.' You've gotten me into hot water. . ."Aren't his folks rather common?'

As an account of how thoughtful Egypt- ians were feeling and reacting in the 1940s, Sugar Street is absorbing. 'Hopefully the war will polish off both the Nazi movement and Colonialism,' thinks Ahmad. 'Then I can concentrate entirely on love.' In fact, he comes across as a fastidious fellow in several ways so I doubt myself if the expression 'hopefully' sprang to mind, but there we are — translation difficulties again. And possibly translation is at the root of another problem — the oddly lack- lustre effect of prose which is after all describing one of the most vibrant cities of the world, and the most ebullient of people. The characters in the trilogy only achieve a sort of half-life for me. They never rise from the page; their speeches are almost interchangeable. And Cairo itself — that teeming, deafening, vivid city — is curiously absent. I am very glad to have read the novels. I feel that I know more about a time and a society in conse- quence of having done so, but as a literary experience it has been one of respectful interest rather than of excitement.