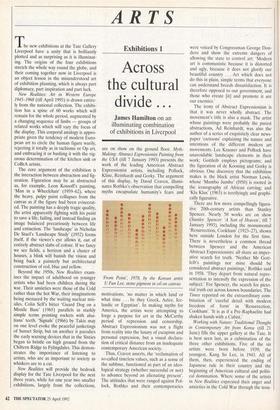 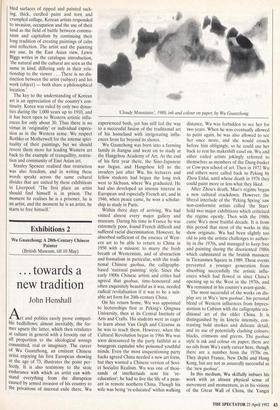 Across the cultural divide ...

James Hamilton on an illuminating combination of exhibitions in Liverpool The new exhibitions at the Tate Gallery Liverpool have a unity that is brilliantly plotted and as surprising as it is illuminat- ing. The origins of the four exhibitions stretch the whole way round the globe, and their coming together now in Liverpool is an object lesson in the misunderstood art of exhibition planning, which is always part diplomacy, part inspiration and part luck.

New Realities: Art in Western Europe 1945-1968 (till April 1995) is drawn entire- ly from the national collection. The exhibi- tion has a spine of 60 works which will remain for the whole period, augmented by a changing sequence of limbs — groups of related works which will vary the focus of the display. This corporal analogy is appro- priate given the tendency of modern Euro- pean art to circle the human figure warily, rejecting it totally as in tachisme or Op art, and embracing it or bashing it with the vig- orous determination of the kitchen sink or CoBrA artists.

The core argument of the exhibition is the interaction between abstraction and fig- uration. Figuration may be as abstracted as, for example, Leon Kossoffs painting, 'Man in a Wheelchair' (1959-62), where the heavy, pulpy paint collapses from the canvas as if the figure had been eviscerat- ed. The painting has a deeply tragic quality, the artist apparently fighting with his paint to save a life, failing, and instead finding an image balanced precariously between life and extinction. The 'landscape' in Nicholas De Stael's 'Landscape Study' (1952) forms itself, if the viewer's eye allows it, out of entirely abstract slabs of colour. If we fancy we see fields, a horizon and a cluster of houses, a blink will banish the vision and bring back a painterly but architectural construction of red, blue and yellow.

Beyond the 1950s, New Realities exam- ines the impact of adulthood on younger artists who had been children during the war. Their anxieties were those of the Cold rather than the hot War, their imaginations being menaced by the waiting nuclear mis- siles. Colin Self's bitter 'Guard Dog on a Missile Base' (1965) parallels in starkly simple terms pointing rockets with alsa- tians' teeth. 'Signals' (1966) by Takis may on one level evoke the peaceful junketings of Sunset Strip, but on another it parodies the early warning devices that in the Sixties began to bristle on high ground from the Chiltern Ridge to Fylingdales. This demon- strates the importance of listening to artists, who are as important to society as whiskers are to a cat.

New Realities will provide the bedrock display for the Tate Liverpool for the next three years, while for one year two smaller exhibitions, largely from the collections,

are on show on the ground floor. Myth- Making: Abstract Expressionist Painting from the USA (till 7 January 1993) presents the work of the leading American Abstract Expressionist artists, including Pollock, Kline, Reinhardt and Gorky. The argument of this display, by David Craven, illumi- nates Rothko's observation that compelling myths encapsulate humanity's fears and

'From Point, 1978, by the Korean artist U Fan Lee, stone pigment in oil on canvas motivations, 'no matter in which land or what time . . . be they Greek, Aztec, Ice- landic or Egyptian'. In making myths for America, the artists were attempting to forge a purpose for art in the McCarthy period of repression and censorship. Abstract Expressionism was not a flight from reality into the luxury of escapism and personal expression, but a visual declara- tion of critical distance from an inadequate contemporary American society.

Thus, Craven asserts, the 'reclamation of so-called timeless values, such as a sense of the sublime, functioned as part of an ideo- logical strategy (whether successful or not) to advance beyond an alienating present'. The attitudes that were ranged against Pol- lock, Rothko and their contemporaries were voiced by Congressman George Don- dero and show the extreme dangers of allowing the state to control art: 'Modern art is communistic because it is distorted and ugly, because it does not glorify our beautiful country . . . Art which does not do this in plain, simple terms that everyone can understand breeds dissatisfaction. It is therefore opposed to our government, and those who create [it] and promote it are our enemies.'

The irony of Abstract Expressionism is that it was never wholly abstract. The movement's title is also a mask. The artist whose paintings were probably the purest abstractions, Ad Reinhardt, was also the author of a series of exquisitely clear news- paper 'cartoons' explaining the nature and intentions of the different modern art movements. Lee Krasner and Pollock have unavoidable landscape elements in their work; Gottleib employs pictograms; and the figuration of de Kooning and Gorky is obvious. One discovery that the exhibition makes is the black artist Norman Lewis, whose 'Mumbo Jumbo' (1950) is rooted in the iconography of African carving; and `Klu Klux' (1963) is terrifyingly and graphi- cally figurative.

There are few more compellingly figura- tive 20th-century artists than Stanley Spencer. Nearly 50 works are on show (Stanley Spencer: 'A Sort of Heaven', till 7 January 1993), including the monumental `Resurrection, Cookham' (1923-27), shown here outside London for the first time. There is nevertheless a common thread between Spencer and the American Abstract Expressionists: all share an imper- ative search for truth. 'Neither Mr Gott- leib's paintings nor mine should be considered abstract paintings,' Rothko said in 1958. 'They depart from natural repre- sentation to intensify the expression of the subject.' For Spencer, the search for picto- rial truth cut across known boundaries. The Times reported on the extraordinary com- bination of 'careful detail with modern freedom of form' in 'Resurrection, Cookham'. 'It is as if a Pre-Raphaelite had shaken hands with a Cubist.'

Working with Nature: Traditional Thought in contemporary Art from Korea 21 June) fills the upper gallery at the Tate. It is best seen last, as a culmination of the three other exhibitions. Five of the six artists were born before 1939; the youngest, Kang So Lee, in 1943. All of them, then, experienced the ending of Japanese rule in their country and the beginning of American cultural and politi- cal domination. Where some of the artists in New Realities expressed their anger and anxieties in the Cold War through the trou- bled surfaces of ripped and painted sack- ing, thick, curdled • paint and torn and crumpled collage, Korean artists responded to invasion, occupation and the use of their land as the field of battle between commu- nism and capitalism by continuing their long tradition of creating paintings of calm and reflection. The artist and the painting are one. In the East Asian view, Lewis Biggs writes in the catalogue introduction, 'the natural and the cultural are seen as the same in kind, differing only in their rela- tionship to the viewer . . . There is no dis- tinction between the artist (subject) and his work (object) — both share a philosophical location.'

The key to the understanding of Korean art is an appreciation of the country's con- tinuity. Korea was ruled by only two dynas- ties during the 1,000 years up to 1910, and it has been open to Western artistic influ- ences for only about 30. Thus there is no virtue in 'originality' or individual expres- sion as in the Western sense. We respect Rothko or Motherwell for the intense spiri- tuality of their paintings, but we should revere them more for leading Western art back to the example of tranquillity, restric- tion and community of East Asian art.

Stanley Spencer realised that restriction was also freedom, and in writing these words speaks across the same cultural divides that are united by these exhibitions in Liverpool: 'The first place an artist should find himself is in prison. The moment he realises he is a prisoner, he is an artist, and the moment he is an artist, he starts to free himself.'