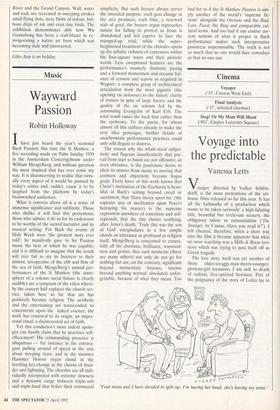 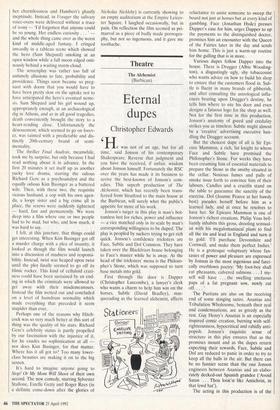 Voyage into the predictable

Voyager, directed by Volker SchlOn- dorff, is the most pretentious of the art- house films released so far this year. It has all the hallmarks of a production which wants to be taken seriously: a high-faluting title, beautiful but irrelevant scenery, the obligatory salute to existentialism (The Stranger, by Camus. Have you read it?'). I felt cheated, therefore, when a short way into the film it became apparent that what we were watching was a Mills & Boon love story which was trying to pass itself off as Greek tragedy.

The love story itself was yet another of those older-scraggy-man-meets-younger- glorious-girl scenarios. I am sick to death of radiant, free-spirited heroines. Part of the poignancy of the story of Lolita lay in

'Your mum and I have decided to split up. I'm having her head, she's having my arms.' her charmlessness and Humbert's ghastly ineptitude. Instead, in Voyager the salivary voice-overs were delivered without a trace of irony — `11'd forgotten that anyone could he so young. Her endless curiosity ... ' and the whole thing came over as the worst kind of middle-aged fantasy. I cringed inwardly in a tableau scene which showed the hero (Sam Shepard) smoking at an open window while a full moon edged omi- nously behind a waiting storm-cloud.

The screenplay was rather too full of untimely allusions to fate, probability and providence. Things soon became so preg- nant with doom that you would have to have been pretty slow on the uptake not to have anticipated the hero's eventual neme- sis. Sam Shepard and his girl wound up, appropriately enough, at an archaeological dig in 'Athens, and as in all good tragedies, death conveniently brought the story to a heart-rending close. Unfortunately the denouement, which seemed to go on forev- er, was tainted with a predictable and dis- tinctly 20th-century brand of senti- mentality.

The thriller Final Analysis, meanwhile, took me by surprise. but only because I had read nothing about it in advance. In the first 20 minutes it set itself up as another yucky love drama, starring the odious Richard Gere as a psychoanalyst and the equally odious Kim Basinger as a battered wife. Then, with these two, the requisite vicious husband, a cop with his own agen- da, a loopy sister and a big crime all in place, the screws were suddenly tightened — hard, fast and permanently. We were deep into a film where one or two people had to be mad, but who, and how much, it was hard to say.

I felt, at this juncture, that things could get interesting. When Kim Basinger got off a murder charge with a pica of insanity, it looked as though the film would launch into a discussion of madness and responsi- bility. Instead, twist was heaped upon twist until the plot finally seemed to go off its filmic rocker. This kind of celluloid crazi- ness could have been sustained by an end- ing in which the criminals were allowed to get away with their misdemeanours. Instead the film wetted out and concluded on a level of humdrum normality which made everything that preceded it seem stupider than ever.

Perhaps one of the reasons why Hitch- cock was so very much better at this sort of thing was the quality of his stars. Richard Gere's celebrity status is partly propelled by our fascination with the injustice of it, for he exudes no sophistication at all — nor does Kim Basinger, for that matter. Where has it all got to? Too many lower- class beauties are making it on to the big screen.

It's hard to imagine anyone going to Stop! Or My Mom Will Shoot of their own

accord. The new comedy, starring Sylvester Stallone, Estelle Getty and Roger Rees (in a definite come-down after the glories of

Nicholas Nickleby) is currently showing to an empty auditorium at the Empire Leices- ter Square. I laughed occasionally, but in pain. On reflection the film seemed as pri- maeval as a piece of badly made pornogra- phy, but not so ingenuous, and it gave me toothache.