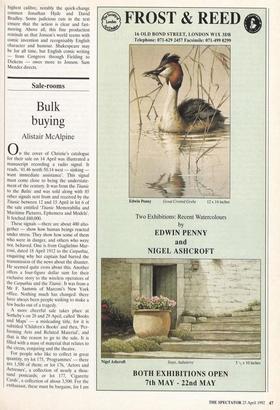 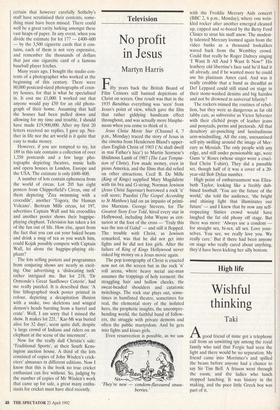 0 n the cover of Christie's catalogue for their sale on 14 April was illustrated a manuscript recording a radio signal. It reads, '41.46 north 50.14 west — sinking want immediate assistance'. This signal must come close to being the understate- ment of the century. It was from the Titanic to the Baltic and was sold along with 85 other signals sent from and received by the Titanic between 12 and 15 April in lot 6 of the sale entitled 'Titanic Memorabilia and Maritime Pictures, Ephemera and Models'. It fetched £60,000.

These signals —there are about 400 alto- gether — show how human beings reacted under stress. They show how some of them who were in danger, and others who were not, behaved. One is from Guglielmo Mar- coni, dated 18 April 1912 to the Carpathia, enquiring why her captain had barred the transmission of the news about the disaster. He seemed quite cross about this. Another offers a four-figure dollar sum for their exclusive story to the wireless operators of the Carpathia and the Titanic. It was from a Mr F. Sammis of Marconi's New York office. Nothing much has changed: there have always been people wishing to make a few bucks out of a tragedy.

A more cheerful sale takes place at Sotheby's on 28 and 29 April, called `Books and Maps' — a misleading title, for it is subtitled 'Children's Books' and then, 'Per- forming Arts and Related Material', and that is the reason to go to the sale. It is filled with a mass of material that relates to the circus, conjuring and the theatre.

For people who like to collect in great quantity, try lot 175, 'Programmes' — there are 1,500 of them; or lot 176, 'Actors and Actresses', a collection of nearly a thou- sand postcards; or lot 177, 'Cigarette Cards', a collection of about 3,500. For the enthusiast, these must be bargains, for I am certain that however carefully Sotheby's staff have scrutinised their contents, some- thing must have been missed. There could well be a great rarity lurking amongst these vast heaps of paper. In any event, when you divide the estimate for lot 177 — £400-600 — by the 3,500 cigarette cards that it con- tains, each of them is not very expensive, and remember the thousands of dollars that just one cigarette card of a famous baseball player fetches.

Many years ago, I bought the studio con- tents of a photographer who worked at the beginning of this century. There were 80,000 postcard-sized photographs of coun- try houses, for that is what he specialised in. It cost me £1,000. I worked out that anyone would pay £50 for an old photo- graph of their home. Assuming that half the houses had been pulled down and allowing for my time and trouble, I should have made £19,900,000. After my first 20 letters received no replies, I gave up. Nei- ther in life nor the art world is it quite that easy to make money.

However, if you are tempted to try, lot 189 in this sale contains a collection of over 1,350 postcards and a few large pho- tographs depicting theatres, music halls and opera houses in London, Europe and the USA. The estimate is only £600-800.

A number of lots contain ephemera from the world of circus. Lot 205 has eight posters from Chipperfield's Circus, one of them depicting 'Zira swimming with a crocodile', another l'ogora, the Human Volcano'. Bertram Mills circus, lot 197, advertises Captain Wall and his crocodiles and another poster shows their bagpipe- playing elephant. Television has taken a lot of the fun out of life. How else, apart from the fact that you can eat your baked beans and drink a mug of tea as you watch him, could Kojak possibly compete with Captain Wall, let alone the bagpipe-playing ele- phant?

The lots selling posters and programmes from conjuring shows are nearly as excit- ing. One advertising a 'dislocating turk' rather intrigued me. But lot 218, 'Dr Ormonde's Great Sunflower Coterie', had me really puzzled. It is described thus: 'A fine lithographed stock poster printed in colour, depicting a decapitation illusion with a snake, two skeletons and winged demon's heads bursting from a barrel and crate', Well, I am sorry that I missed the show. It makes lot 221, ' Kar-Mi was buried alive for 32 days', seem quite dull, despite `a large crowd of Indians and riders on an elephant at the scene of the interment'.

Now for the really dull Christie's sale: `Traditional Sports', at their South Kens- ington auction house. A third of the lots consisted of copies of John Wisden's crick- eters' almanacs in different editions. Now I know that this is the book no true cricket enthusiast can live without. So, judging by the number of copies of Mr Wisden's work that came up for sale, a great many enthu- siasts for cricket must have died recently.