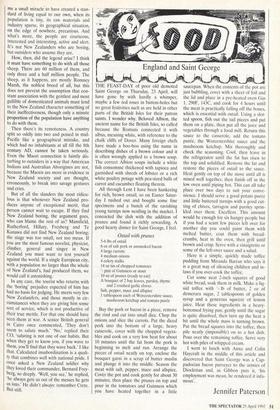 THE FEAST-DAY of poor old demoted Saint George on Thursday, 23 April, will have gone by with hardly a whimper, maybe a few red roses in button-holes but no great festivities such as are held in other parts of the British Isles for their patron saints. I wonder why. Beloved Albion, the ancient name for the British Isles, so called because the Romans connected it with albus, meaning white, with reference to the chalk cliffs of Dover. Many foreign chefs have made a boo-boo using the name in describing dishes of a brown colour and it is often wrongly applied to a brown soup. The correct Albion soups include a white fish consommé thickened with tapioca and garnished with shreds of lobster or a rich white poultry potage with pea-sized balls of carrot and cucumber floating therein.

All through Lent I have been hankering for rich, brown oxtail, so on Easter Satur- day I rushed out and bought some fine specimens and a bunch of the ravishing young turnips now nestling in the market. I concocted the dish with the addition of prunes and found it richly rewarding. A good hearty dinner for Saint George, I feel.

Buy the pork or bacon in a piece, remove the rind and cut into small dice. Chop the onions and slice the carrots. Put the diced pork into the bottom of a large, heavy casserole, cover with the chopped vegeta- bles and cook on a very low heat for about 10 minutes until the fat from the pork is beginning to melt and run. Arrange the pieces of oxtail neatly on top, enclose the bouquet garni in a scrap of butter muslin and plunge it into the middle. Season the meat with salt, pepper, mace and allspice. Cover the pot and cook gently for about 30 minutes, then place the prunes on top and pour in the tomatoes and Guinness which you have heated together in a little

saucepan. When the contents of the pot are just bubbling, cover with a sheet of foil and the lid and place in a pre-heated oven Gas 1, 290F, 143C, and cook for 4 hours until the meat is practically falling off the bones, which is.essential with oxtail. Using a slot- ted spoon, fish out the tail pieces and put them on a plate, then put all the juice and vegetables through a food mill. Return this sauce to the casserole, add the tomato purée, the Worcestershire sauce and the mushroom ketchup. Mix thoroughly and check the seasoning. Cool, then leave in the refrigerator until the fat has risen to the top and solidified. Remove the fat and restore the pieces of oxtail to the sauce. Heat gently on top of the stove until all is mixed well together, then finish off in the low oven until piping hot. This can all take place over two days to suit your conve- nience. I should serve a good potato purée and little buttered turnips with a good cut- ting of chives, tarragon and parsley sprin- kled over them. Excellent. This amount would be enough for six hungry people but if you had a scant few pieces left over for another day you could paint them with melted butter, coat them with bread- crumbs, heat in the oven, then grill until brown and crisp. Serve with a vinaigrette or some of the left-over sauce and a salad.

Here is a simple, quickly made toffee pudding from Miranda Barran who says it is a great way of silencing children and in- laws if you over-cook the toffee.

Cut some neat 2-inch squares of good white bread, soak them in milk. Make a liq- uid toffee with '4 lb of butter, 2 oz of demerara sugar, 2 tablespoons of golden syrup and a generous squeeze of lemon juice. Heat these ingredients in a heavy- bottomed frying pan, gently until the sugar is quite dissolved, then turn up the heat a bit until the whole mass is turning brown. Put the bread squares into the toffee, then pile neatly (impossible) on to a hot dish. Pour over the remaining toffee. Serve very hot with piles of whipped cream.

I went to lunch with Anna and Colin Haycraft in the middle of this article and discovered that Saint George was a Cap- padocian bacon purveyer to the armies of Diocletian and, as Gibbon puts it, 'his employment was mean, he rendered it infa- mous'.