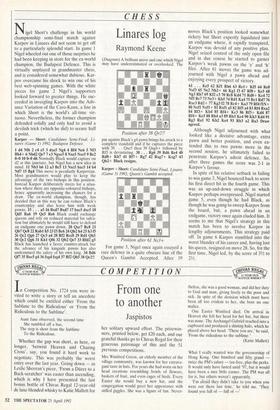 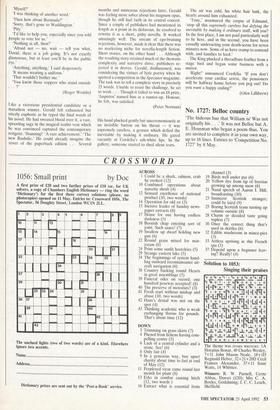 From one to another

Aunt Jane observed, the second time She tumbled off a bus, The step is short from the Sublime To the Ridiculous.

Whether the gap was short, as here, or longer, 'betwixt Heaven and Charing Cross', say, you found it hard work to negotiate. This was probably the worst entry over the last year. Going down — in Leslie Sheeran's piece, 'From a Darer to a Back-scratcher' was easier than ascending, which is why I have presented the last bonus bottle of Chivas Regal 12-year-old de luxe blended whisky to Katie Mallett for

her solitary upward effort. The prizewin- ners, printed below, get £20 each, and our grateful thanks go to Chivas Regal for their generous patronage of this and the 51 previous competitions.

Mrs Winifred Green, an elderly member of the village community, was known for her extrava- gant taste in hats. For years she had worn on her head creations resembling bowls of flowers, baskets of fruit, and even cages of birds. Every Easter she would buy a new hat, and the congregation would greet her appearance with stifled giggles. She was a figure of fun. Never-

112 YEAR OLD SCOTCH WHISKY theless, she was a good woman, and did her duty to God and man, giving freely to the poor and sick. In spite of the derision which must have been all too evident to her, she bore no one malice.

One Easter Winifred died. On arrival in Heaven she felt her head for her hat, but there was none. The Archangel Gabriel reached into a cupboard and produced a shining halo, which he placed above her head. 'There you are,' he said, 'From the ridiculous to the sublime.'

(Katie Mallett) What I really wanted was the governorship of Hong Kong. One hundred and fifty grand twice the PM's salary — tax-free, plus the perks. It would only have lasted until '97, but it would have been a nice little earner. The PM was all for it, but others weren't apparently.

'I'm afraid they didn't take to you when you were out there last time,' he told me. 'They found you full of — full of —'

'I was thinking of another word.'

'Then how about Bermuda?'

'I'd like to help you, especially since you told people to vote for us.'

'Afraid not — no, wait — tell you what, David, there is a job going. It's not exactly glamorous, but at least you'll be in the public eye.'

'Anything, anything,' I said desperately.

'It means wearing a uniform.'

'That wouldn't bother me.'

'You knOw those coppers who stand outside (Roger Woddis) Like a victorious presidential candidate or a marathon winner, Gerald felt exhausted but utterly euphoric as he typed the final words of his novel. He had sweated blood over it, a vast, sprawling saga in the magical realist vein which he was convinced captured the contemporary zeitgeist. 'Stunning!' A rare achievement.' The new Rushdie.' He could already imagine the cover of the paperback edition . . . Several months and numerous rejections later, Gerald was feeling more sober about his magnum opus, though he still had faith in its central conceit. Since a couple of publishers had mentioned its length as a point in its disfavour, he resolved to rewrite it as a short, pithy novella. It worked amazingly well. The stream of ego-bruising rejections, however, made it clear that there was no marketing niche for novella-length fiction. Short stories, on the other hand . . . Although the resulting story retained much of the thematic complexity and narrative drive, publishers re- jected it in droves. Gerald, disillusioned, was considering the virtues of lyric poetry when he spotted a competition in the Spectator magazine. The task was to tell a complete story in precisely 25 words. Unable to resist the challenge, he set to work . . . Though it failed to win an £8 prize, 'Jaspistos' named him as a runner-up. Honour, he felt, was satisfied.

(Peter Norman) His hand plucked gently but unceremoniously at an invisible button on his throat — it was supremely careless, a gesture which defied the inevitable by making it ordinary. He gazed vacantly at Cordelia's ash-white lips. In the gallery, someone started to shed silent tears. The air was cold, his white hair lank, the hearts around him exhausted.

'Tony,' murmured the corpse of Edmund, 'stop all this supremely careless but defying the inevitable by making it ordinary stuff, will you? In the first place, I am not paid particularly well to lie here, and in the second, you have been casually underacting your death-scene for seven minutes now. Some of us have cramp to contend with, and families to feed.'

The King plucked a threadbare feather from a stage bird and began some business with a mirror.

'Right!' announced Cordelia. 'If you don't accelerate your cardiac arrest, the pensioners will he halfway home before you peg out! Do you want a happy ending?'