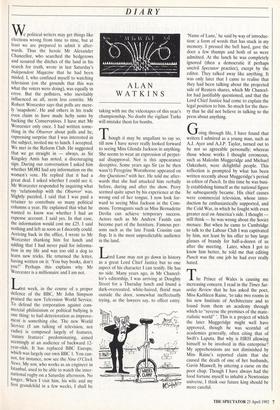 We political writers may get things like elections wrong from time to time, but at least we are prepared to admit it after- wards. Thus the heroic Mr Alexander Chancellor, who searched the hedgerows and scoured the ditches of the land in his search for truth, wrote in last Saturday's Independent Magazine that he had been misled. I, who confined myself to watching television (on the grounds that this was what the voters were doing), was equally in error. But the pollsters, who inevitably influenced us all, seem less contrite. Mr Robert Worcester says that polls are mere- ly 'snapshots'. He and others in his trade even claim to have made hefty sums by backing the Conservatives. I have met Mr Worcester only once. I had written some- thing in the Observer about polls and he, expressing surprise that I was interested in the subject, invited me to lunch. I accepted. We met in the Reform Club. He suggested that we go straight in — always, as Sir Kingsley Amis has noted, a discouraging sign. During our conversation I asked him whether MORI had any information on the women's vote. He replied that it had a great deal. I asked whether I could see it. Mr Worcester responded by inquiring what my 'relationship with the Observer' was. Slightly puzzled, I said that I was paid a retainer to contribute so many political columns a year. He explained that what he wanted to know was whether I had an expense account. I said yes. In that case, the information would cost me £25. I said nothing and left as soon as I decently could. Arriving back in the office, I wrote to Mr Worcester thanking him for lunch and adding that I had never paid for informa- tion in my life and was too old a dog to learn new tricks. He returned the letter, having written on it: 'You buy books, don't you?' Perhaps this explains why Mr Worcester is a millionaire and I am not.

Last week, in the course of a proper defence of the BBC, Mr John Simpson praised the new Television World Service. To defend the corporation against com- mercial philistinism or political bullying is one thing: to hail deterioration as improve- ment is something else. The new World Service (I am talking of television, not radio) is composed largely of features, 'nature features' predominating, aimed seemingly at an audience of backward 12- year-olds. It has replaced BBC Europe, which was largely our own BBC 1. You can- not, for instance, now see the Nine O'Clock News. My son, who works as an engineer in Istanbul, used to be able to watch the inter- national rugby on a Saturday afternoon. No longer. When I visit him, his wife and my first grandchild in a few weeks, I shall he

taking with me the videotapes of this year's championship. No doubt the vigilant Turks will mistake them for bombs.

Though it may be ungallant to say so, till now I have never really looked forward to seeing Miss Glenda Jackson in anything. She seems to wear an expression of perpet- ual disapproval. Nor is this appearance deceptive. Some years ago Sir (as he then wasn't) Peregrine Worsthorne appeared on Any Questions? with her. He told me after- wards that she had attacked him verbally before, during and after the show. Perry seemed quite upset by his experience at the wrong end of her tongue. I now look for- ward to seeing Miss Jackson in the Com- mons. Termagants such as Miss Bernadette Devlin can achieve temporary success. Actors such as Mr Andrew Faulds can become part of the furniture. Famous per- sons such as the late Frank Cousins can flop. It is the most unpredictable audience in the land.

Lord Lane may not go down in history as a great Lord Chief Justice but to one aspect of his character I can testify. He has no side. Many years ago, in Mr Chancel- lor's editorship, I was arriving at Doughty Street for a Thursday lunch and found a dark-overcoated, white-haired, florid man outside the door, somewhat ineffectually trying, as the lawyers say, to effect entry. 'Name of Lane,' he said by way of introduc- tion: a form of words that has stuck in my memory. I pressed the bell hard, gave the door a few thumps and both of us were admitted. At the lunch he was completely ignored (then a democratic if perhaps uncivil Spectator practice), except by the editor. They talked away like anything. It was only later that I came to realise that they had been talking about the projected sale of Reuters shares, which Mr Chancel- lor had justifiably questioned, and that the Lord Chief Justice had come to explain the legal position to him. So much for the theo- ry that he did not believe in talking to the press about anything.

Going through life, I have found that writers I admired as a young man, such as A.J. Ayer and A.J.P. Taylor, turned out to be not so agreeable personally; whereas those whose works I thought erroneous, such as Malcolm Muggeridge and Michael Oakeshott, were delightful people. This reflection is prompted by what has been written recently about Muggeridge's period as editor of Punch. In this time he was busi- ly establishing himself as the national figure he subsequently became. His chief causes were commercial television, whose intro- duction he enthusiastically supported, and the Cold War, in which he fought with even greater zeal on America's side. I thought still think — he was wrong about the Soviet menace. But when he came to Cambridge to talk to the Labour Club I was captivated by him, not least by his offer to buy large glasses of brandy for half-a-dozen of us after the meeting. Later, when I got to know him better, he told me that editing Punch was the one job he had ever really hated.

The Prince of Wales is causing me increasing concern. I read in the Times Sat- urday Review that he has asked the poet, Miss Kathleen Raine, 'to take two rooms in his new Institute of Architecture and to found from them an academy through which to "reverse the premises of the mate- rialistic world" '. This is a project of which the later Muggeridge might well have approved, though he was scornful of academies generally, often citing that of Swift's Laputa. But why is HRH allowing himself to be involved in this enterprise? My apprehensions are not diminished by Miss Raine's reported claim that she caused the death of one of her husbands, Gavin Maxwell, by uttering a curse on the poor chap. Though I have always had the food fortune myself to inhabit a Newtonian universe, I think our future king should be more careful.