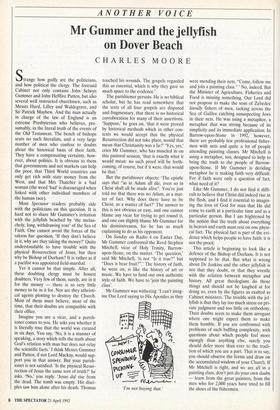 Mr Gummer and the jellyfish on Dover Beach

Strange how godly are the politicians, and how political the clergy. The foresaid Cabinet not only contains John Selwyn Gummer and John Hellfire Patten, but also several well instructed churchmen, such as Messrs Hurd, Lilley and Waldegrave, and Sir Patrick Mayhew. And the man actually in charge of the law of England is an extreme Presbyterian who believes, pre- sumably, in the literal truth of the events of the Old Testament. The bench of bishops seats no such literalists, and a very large number of men who confess to doubts about the historical basis of their faith. They have a compensating certainty, how- ever, about politics. It is obvious to them that governments and not markets can help the poor, that Third World countries can only get rich with state money from the West, and that Mrs Thatcher is a bad woman (the word 'bad' is discouraged when linked with other individual members of the human race).

Most Spectator readers probably side with the politicians on this question. It is hard not to share Mr Gummer's irritation with the jellyfish beached by 'the melan- choly, long, withdrawing roar' of the Sea of Faith. One cannot avoid the forces of the saloon bar question, 'If they don't believe in it, why are they taking the money?' Quite understandable to have trouble with the physical Resurrection of Jesus, but then why be Bishop of Durham? It is rather as if a pacifist was appointed field-marshal.

Yet it cannot be that simple. After all, these doubting clergy must be honest doubters. Very few of them, surely, are in it for the money — there is so very little money to be in it for. Nor are they atheisti- cal agents plotting to destroy the Church. Most of them must believe, most of the time, that their doubts are compatible with their office.

Imagine you are a vicar, and a parish- ioner comes to you. He asks you whether it is literally true that the world was created in six days. You say, 'No, it is a manner of speaking, a story which tells the truth about God's relation with man but does not relay the scientific facts.' I think Messrs Gummer and Patten, if not Lord Mackay, would sup- port you in that answer. But your parish- ioner is not satisfied. 'Is the physical Resur- rection of Jesus the same sort of truth?' he

asks. 'No,' you reply. 'Jesus did rise from the dead. The tomb was empty. His disci- ples saw him alone after his death. Thomas

touched his wounds. The gospels regarded this as essential, which is why they gave so much space to the evidence.'

The parishioner persists. He is no biblical scholar, but he has read somewhere that the texts of all four gospels are disputed and fragmentary, that there is no historical corroboration for many of their assertions. 'Suppose,' he goes on, 'that it were proved by historical methods which in other con- texts we would accept that the physical Resurrection did not take place, would that mean that Christianity was a lie?"Yes, yes,' cries Mr Gummer, who has muscled in on this pastoral session, 'that is exactly what it would mean: no such proof will be forth- coming, of course, but if it were, that would be that.'

But the parishioner objects: 'The epistle says that "as in Adam all die, even so in Christ shall all be made alive". You've just told me that there was no Adam, as a mat- ter of fact. Why does there have to be Christ, as a matter of fact?' The answer to this is not obvious or easy, and one cannot blame any vicar for trying to get round it, and one can slightly blame Mr Gummer for his dismissiveness, for he has as much explaining to do as his opponent.

On Sunday on Radio 4 on Easter Day, Mr Gummer confronted the Revd Stephen Mitchell, vicar of Holy Trinity, Barrow- upon-Stone, on the matter. 'The question,' said Mr Mitchell, 'is not "Is it true?" but "Does it bear fruit?".' The history of faith, he went on, is like the history of art or music. We have to fund our own authentic style of faith. We have to 'join the painting class'.

Mr Gummer was withering: 'I can't imag- ine Our Lord saying to His Apostles as they 'I'm not buying that.' were mending their nets, "Come, follow me and join a painting class." ' No, indeed. But the Minister of Agriculture, Fisheries and Food is missing something. Our Lord did not propose to make the sons of Zebedee literally fishers of men, tacking across the Sea of Galilee catching unsuspecting Jews in their nets. He was using a metaphor, a metaphor that was strong because of its simplicity and its immediate application. In Barrow-upon-Stone in 1992, however, there-are probably few professional fisher- men with nets and quite a lot of people attending painting classes. Mr Mitchell is using a metaphor, too, designed to help to bring the truth to the people of Barrow- upon-Stone. If Mr Gummer is deriding metaphor he is making faith very difficult. For if faith were only a question of fact, what need of it?

Like Mr Gummer, I do not find it diffi- cult to believe that Christ did indeed rise in the flesh, and I find it essential to imagin- ing the love of God for man that He did come to earth at a particular time and as a particular person. But I am frightened by the notion that the truth about everything in heaven and earth must rest on one physi- cal fact. The physical fact is part of the evi- dence which helps people to have faith: it is not the proof.

This article is beginning to look like a defence of the Bishop of Durham. It is not supposed to be that. But what is wrong about Dr Jenkins and the other jellyfish is not that they doubt, or that they wrestle with the relation between metaphor and history. All great theologians do those things and should not be laughed at for doing so, even by the figures as exalted as Cabinet ministers. The trouble with the jel- lyfish is that they lay too much stress on pri- vate judgment and too little on orthodoxy. Their doubts seem to make them arrogant where one might expect them to make them humble. If you are confronted with problems of such baffling complexity, with questions about which people feel more strongly than anything else, surely you should defer more than ever to the tradi- tion of which you are a part. That is to say, you should observe the forms and draw on the accumulated wisdom of your Church. If Mr Mitchell is right, and we are all in a painting class, don't just do your own daubs — learn from the great painters, from the men who for 2,000 years have tried to fill the shoes of the fishermen.