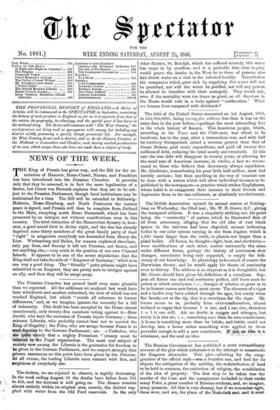 Page 1, 25 August 1866 — The Prussian Chamber has proved itself even more placable than
Close

The Prussian Chamber has proved itself even more placable than

we expected. All the addresses we analyzed last week have been withdrawn and another submitted, the text of which has not reached England, but which " avoids all reference to former differences," and, as we imagine, ignores the necessity for a bill of indemnity. This draft has been accepted by the House almost unanimously, only twenty-five members voting against it—Herr Jacobi, who says the successes of Prussia injure Germany ; three extreme Liberals, who probably cannot bear not to convict the Bing of illegality ; the Poles, who are savage because Posen is to send deputies to the German Parliament ; any .e Catholics, who see quite clearly that a mighty Protestant r ormany must be inimical to the Papal organization. The most real subject of anxiety now among the Liberals is the guarantee for freedom to be given to the German Parliament, and we suspect strongly that private assurances on this point have been given by the Premier. At all events, the leading Liberals seem content with him, and suspicious of everybody else. -