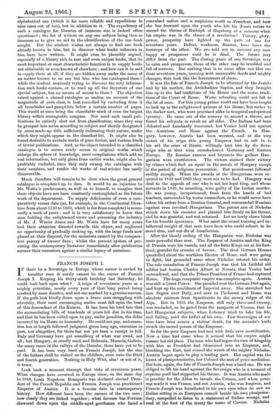 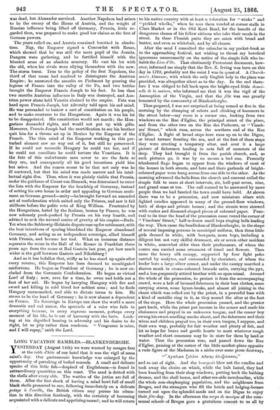 IF there be a Sovereign in Europe whose career is envied by humbler men it surely cannot be the career of Francis Joseph I. Keeping his thirty-sixth birthday last Saturday, he could look back upon what ? A reign of seventeeen years as a mighty potentate, nearly every year of that long period being marked by some disaster, and not one marked by a genuine success. If the gods look kindly down upon a brave man struggling with adversity, their most encouraging smiles must fall upon the head of this descendant of the Kaisers. It has been his hard fate that the accumulating bills of hundreds of years fell due iu his time, and that he has been called upon to pay, under penalties, the debts incurred by his House to humanity. He could not pay, and execu- tion has at length followed judgment given long ago, execution in part, not altogether, for there has not yet been a receipt in full. Italy and Germany have got something of what was owed, not all ; but Hungary, so cruelly used, and Bohemia, Moravia, Galicia, the many races in the valleys of the Danube, these have yet to be paid. It has been very hard on Francis Joseph, but the sins of the fathers shall be visited on the children, even unto the third and fourth generation. Nothing in Holy Writ, alas ! or out of it, is truer.

Look back a moment through that vista of seventeen years. What changes have occurred in Europe since, on the same day in 1848, Louis Napoleon Bonaparte was declared elected Presi- dent of the French Republic and Francis Joseph was proclaimed Emperor of Austria. It is a famous date in contemporary history. How different have been the careers of the two men ; how closely they are linked together ; what favours has Fortune showered down upon the middle-aged gentleman who faced a convulsed nation and a suspicious world as President, and how she has frowned upon the youth who left his Jesuit tutors to ascend the throne of Rudolph of Hapsburg at a moment when his empire was in the throes of a revolution? Victory, glory, power, prosperity have lighted up the path of one for seventeen years. Defeat, weakness, disaster, have beset the footsteps of the other. We are told not to account any man happy or prosperous until he is dead. The future may differ from the past. The closing years of one Sovereign may be calm and prosperous, those of the other may be troubled and full of sorrows. But nothing that is to come after can blot out those seventeen years, teeming with memorable deeds and mighty changes, that look like the forerunners of doom.

It was the fate of Francis Joseph to be educated by the Jesuits and by his mother, the Archduchess Sophia, and they brought him up in the bad traditions of his House and the worse tradi- tions of the Court of Rome. Worse schooling could not fall to the lot of man. For this young prince could not have been taught to look up to the enlightened princes of his House, but rather to the darker sort, who were practised alike in temporal and spiritual tyranny. He came out of the nursery to ascend a throne, and found his subjects in revolt on all sides. The Italians had been defeated and Lombardy recovered, but Venice held out against the Austrians and Rome against the French. In Hun- gary, however, Austria had been worsted, and at the very outset of his reign this young Emperor had to call in to his aid the arms of Russia, willingly lent him by the Sove- reign who at that time overshadowed Germany and Eastern Europe. By Russian cannon and bayonets the gallant Hun- garians were overthrown. The victors stained their victory by crimes which find no equal in the annals of Hungary except in the period of religious persecution. But punishment followed swiftly enough. When the swords of the Hungarians were re- quired in 1859 and 1866 they were not to be had. Hungary was deaf to the appeals of one who is not her legal king, and whose servants in 1819, he assenting, were guilty of the foulest murder. He was young, inexperienced, fresh from the hands of bad teachers, surrounded by worse counsellors, or he would never have taken his orders from a Russian General, and commanded Russians against even revolted Hungarians. The potent arm of Nicholas struck down his enemies and planted him firmly on his throne, and he was grateful, and not ashamed. Let no lowly clown blush for his humble ignorance. What must the moral training and in- tellectual insight of that man have been who could submit to be saved thus, and not die of humiliation.

After the bloody ending of the Hungarian war, Nicholas was more powerful than ever. The Emperor of Austria and the King of Prussia were his vassals, and all the little Kings sat at his foot- stool, grateful for crumbs of favour. The rival German Houses quarrelled about the worthless Elector of Hesse, and were going to fight, but grounded arms when Nicholas uttered his order. The sole consolation of Francis Joseph was that his faithful old soldier had beaten Charles Albert at Novara, that Venice had surrendered, and that the Prince President of France had captured Rome. The huge composite empire was complete again. Austria was still a Great Power. She presided over the German Diet again, and kept up the semblance of Imperial sway. She stretched her iron fingers over Italy, and save in Piedmont and Rome was absolute mistress from Spartivento to the snowy ridges of the Alps. But in 1853 the Emperor, still only three-and-twenty, was reminded, as he gazed from the ramparts of Vienna, that he had Hungarian subjects, when Lebeney tried to take his life, and failing, paid the forfeit of his own. Few Sovereigns of our time have been nearer a violent death, for the assassin's knife struck the sacred person of the Emperor.

So far the poor Emperor had met with little save mortification. Now a time had come when it seemed that his empire might resume her old place. The man who had begun the race of kingship with him as President had blossomed into an Emperor, and, troubling the East, had roused the wrath of the mighty Nicholas. Austria began again to play a leading part. Her capital was the haunt of plenipotentiaries, her Cabinet the seat of quasi-mediation. But here, again, the fate of Francis Joseph was a hard one. He was obliged to lift his hand against the Sovereign who in a moment of supreme peril had supported his throne. It was Austria who made it possible for the Allies to invade the Crimea, and when peace was made it was France, and not Austria, who was forgiven, and Francis Joseph was humiliated in his own eyes when he saw an Italian sitting in an European council beside his own plenipoten- tiary, compelled to listen to a statement of Italian wrongs, and read at the foot of the treaty the name of Cavour. Nicholas

was dead, but Alexander survived. Another Napoleon had arisen to be the enemy of the House of Austria, and the weight of Russian influence being lifted off Germany, Prussia, little re- garded then, was prepared to make good her claims as the first of German powers.

The years rolled on, and Austria remained besotted in absolu- tism. Nay, the Emperor signed a Concordat with Rome, which showed that he was still the mere pupil of the Jesuits. Dangers were gathering, and he fortified himself with the blunted arms of an obsolete armoury. He cast his lot with the old, when his rivals were allying themselves with the new. The storm burst. True to the policy of the first Napoleon, the third of that name had resolved to disintegrate the Austrian Empire ; he answered the assaults on Piedmont by pouring the legions of France into the valley of the Po, and two battles brought the Emperor Francis Joseph to his feet. In less than two months Austrian influence in Italy was destroyed, and Aus- trian power alone held Venetia chained to the empire. Fate was hard upon Francis Joseph, but adversity told upon his sad mind. He was persuaded to bestow a sort of constitution on his people, and to make overtures to the Hungarians. Again it was his lot to be disappointed. His constitution would not march ; the Hun- garians demanded rights, and would not put up with gifts. Moreover, Francis Joseph had the mortification to see his brother quit him for a throne set up in Mexico by the Emperor of the French. The thin mind of the Emperor working in this per- turbed element saw no way out of it, but still he persevered. If he could not reconcile Hungary he could tax her, and if he could not conciliate he could torture the Venetians. It is the fate of this unfortunate man never to see the facts as they are, and consequently all his good intentions yield him but ashes. And the reason seems to be that not only was he ill nurtured, but that his mind was made narrow and his intel- lectual sight dim. Thus, when it was plainly visible that Prussia, under the guidance of Count von Bismark, was determined to enter the lists with the Emperor for the headship of Germany, instead of setting his own house in order and appealing to German senti- ment on German ground—unity—he brought forward an amended act of confederation which suited only the Princes, and saw it fall stillborn before the polite veto of King William. Frustrated by the Hungarians, hated by the Italians, beaten by Prance, he was now solemnly pooh-poohed by Prussia on his very hearth, and advised to seek the natural centre of gravity of his empire—Buda. Yet when the Schleswig-Holstein dispute rose up for settlement, with the best intentions of sparing bloodshed the Emperor abandoned Germany, and acting as an independent sovereign, allied himself with Prussia, and became her tool. What an immense distance separates the scene in the Hall of the Romer in Frankfort three years ago from the scene at Bad Gastein last year, yet how much wider is the gulf between Gastein and Nikolsburg ?

And so it has befallen that, stiffly as ho has stood up again after every reverse, this Emperor has been doomed to unmitigated misfortune. He began as President of Germany ; he is now ex- cluded from the Germanic Confederation. lie began as virtual Lord of Italy ; now, save for a time, he owns and holds not a foot of her soil. He began by harrying Hungary with fire and sword and killing in cold blood her noblest sons ; and he finds Hungary unreconciled, and able to dictate terms to him. He strove to be the head of Germany ; he is now almost a dependent on France. No Sovereign in Europe can show the world a more dramatic and sad career, the spectacle of a ruler who fails in everything because, in every supreme moment, perhaps every moment of his life, he is out of harmony with the facts. Look- ing at his dignified bearing in adversity and his desire to do right, let us pity rather than condemn. " Vengeance is mine, and I will repay," saith the Lord.