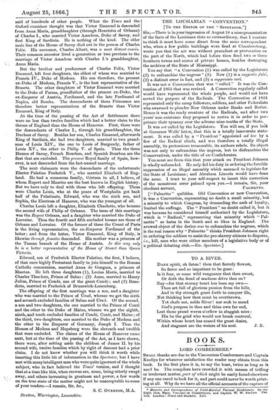 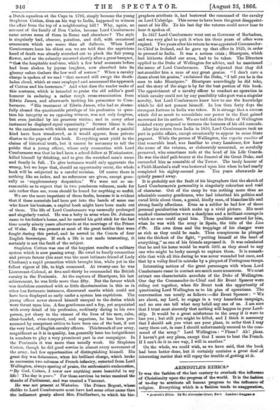 SMALL thanks are due to the Viscountess Combermere and Captain Knollys for whatever satisfaction the reader may obtain from this book. In the first place it is, to say the least, twice as long as it need be. The compilers have crowded it with masses of trifling or irrelevant matter, part of which might be easily found elsewhere if any one cared to look for it, and part could never be worth print- ing at all. Why do we have all the official accounts of the capture of • Memoirs and Correspondence of Field-Marshal Viscount Combermere. By the Right Hon. ?dp.ry, Viscount.as Combermere, and Captain W. W. Knollys. Tyro vols. London: Hurst and Blacken. 1d(313. a Dutch squadron at the Cape in 1796, simply because the young Stapleton Cotton,.then on-his way to India, happened to witness the affair from the top of a neighbouring hill? Why, again, an account of the family of Don Carlos, because Lord Combermere came across some of them in Rome and elsewhere ? The style is singularly bad, obscure, pointless, and dull, with occasional ornaments which are worse than all dullness. 'When Lord Combermere loses his eldest son we are told that the capricious hand of death was already stretched out to pluck the fair young flower, and as the calamity occurred shortly after a great banquet, 46that the hospitable roof-tree, which a few brief moments before had been shaken by joyous laughter, now absorbed into its gloomy oaken timbers -the low wail of sorrow." When a cavalry charge is spoken of we read "that onward still swept the death- laden cloud, which at once enveloped and announced the approach of Cotton and his horsemen." And what does the reader make of this sentence, which is intended to praise the old soldier's good humour in enduring a rather rough cross-examination from Edwin James, and afterwards inviting his persecutor to Com- bermere. a His treatment of Edwin James, who had so shame- fully abused the questionable privilege of his profession to ques- tion his integrity as an opposing witness, was not only forgiven, but even justified by his generous victim ; and in many other instanced he displayed equal equanimity." Severer blame is due to the carelessness with which many personal notices 'of a painful kind have been transferred, as it would appear, from private diaries to the pages of this book. Everything must yield to the claims of historical truth, but it cannot be necessary to tell •the public that a young officer, whose only connection with Lord Combermere was that he had been a school-fellow at Westminster, killed himself by'drinking, and to give the wretched man's name and family in full. , To give instances would only aggravate the wrong, but we hope that, should an opportunity occur, the whole book will be slibjected to a careful revision. Of course there is nothing like an index, and no references are given, except gene- rally as supplementary despatches.' We were not so un- reasonable as to expect that in two ponderous volumes, made for sale rather than use, room should be found for anything so useful.

We are the more impatient of these faults, because it is evident that if these materials had been put into the hands of some one who knew his business, -a capital book might have been made 'out of them. The life of Lord Combermere was unusually prolonged sand singularly varied. He-was a baby in arms when Dr. Johnson came to hislather's house, and he carried his gold stick for the last time nearly ninety years afterwards at• the marriage of the Prince of Wales. He was present-at most of the great battles that were fought during this period, and he served in the Courts of four English 'Sovereigns. If such a life is not made interesting, it certainly is not the fault of the subject.

Stapleton Cotton was one of the happiest results of -a military system which is now passing away. He owed to family connection and private favour (his aunt was the most intimate friend of Lady Chatham) a rapid promotion which brought him, while yet in the fullest vigour of life, to high command. At twenty-one he was Lieutenant-Colonel, at five-and-thirty he commanded the British cavalry in the Peninsula. At the capture of Bhurtpore, his last achievement, be was little more than fifty. But the favour which was doubtless exercised with as little discrimination in this as in other less fortunate instances, discovered merits which could not have been displayed so early under a system less capricious. The young officer never showed himself unequal to -the duties which were thrust upon him. A fine gentleman and a fop, yet acquainted with every detail of his profession, recklessly daring in his own person, yet chary to the utmost of the lives of his men, calm, clear-headed, even-tempered, and sagacious, he has been pro- nounced by competent critics to have been one of the best, if not the very best, of English cavalry officers. This branch of our army, magnificent as Me in quality, has.generally been too insignificant in numbers to play a very prominent part in our campaigns. In the Peninsula it was more than usually weak. Sir Stapleton Cotton, though he did good service in almost every movement of the army, had few opportunities of distinguishing himself. His great day was. Salamanca, when his brilliant charge, which _broke in succession two columns of French infantry, extorted from Lord Wellington, always sparing of praise, the enthusiastic exclamation, 4 qiy. God, Cotton, I never saw anything more beautiful in my life ! The day is yours." For these services he twice received the thanks of Parliament, and was created a Viscount.

He was not present at Waterloo. The Prince Regent, whose dislike to Lord Combermere must have had some other cause than the indisoreet gossip about Mrs. FitzHerbert, to which his bio-

graphers attribute it, had bestowed the command of the cavalry on Lord Uxbridge. This-seems to have been the.great disappoint- ment of his life. To his last day the veteran could never bear to hear it spoken of.

In 1817 Lord Combermere went out as Governor of Barbadoee, and was very glad to quit it when his three years of office were expired. Two years af ter hisreturn helves appointed Commander-

in-Chief in Ireland, and he gave up that office in 1825, in order to, proceed-to India. It was a serious crisis ; Bhurtpore, which had hitherto defied our arms, had to be taken. The Directors

applied to the Duke of Wellington for advice, and he mentioned the name of Lord Combermere. .They objected that they did not consider him a man of any great genius. ".I don't care a damn about his genius," exclaimed the Duke, "I tell you he is the man to take Bhurtpore." Ehurtpore aceordieWy he did take,

and the story of the siege is by far the beat portion of this book. The appointment of a cavalry officer to conduct an operation in

which cavalry could not by any possibility take part was a singular novelty, but Lord Combermere knew how to use the knowledge which he did not possess himself. In less than forty drys the strongest fortress in India was taken. It is strange that :a success which did so much to consolidate our power in the East gained no reward for its author. We are told that the Duke of Wellington resisted every proposal to increase the honours of his old comrade.

After his return from India in 1830, Lord Comberniere teok no part in public affairs, except occasionally to appear in eome State pageant. While the person of Wellington, the capita canities of

that venerable head, was familiar to every Londoner, few 'knew the name of the veteran, so elaborately accoutred, so -carefully preserved, who sometimes rode at the head of his Life Guards.

He was the chief pall-bearer at the funeral of the Great Duke,. and succeeded him as constable of the Tower. The tardy honour of a Field-Marshal's staff was bestowed upon him when he had nearly completed his eighty second year. Ten years afterwards Jae quietty passed away.

It is probably not the fault of his biographers that the eketch_of Lord Combermerea personality is singularly colourless and of character. Out of the camp he was nothing more than an admirable country gentleman, who had inherited his politics.and cared little about them, a genial, kindly man, of blameless life and strong family affections. Even as a soldier he had few of those personal peculiarities which make up a vivid picture. His most marked characteristics were a dandyism and a brilliant .courage in

which no one could equal him. These qualities earned.for him, when he was with the army in Spain, the title of the Lion d'Or. His own dress and the trappings of his charger were as rich as they could be made. Thus conspicuous he pinned into the thickest of the fight, "putting himself at the head of

everything," as one of his friends expressed it. It was calculated that he and his horse would be worth 5001. as they stood to any one who might be lucky enough to capture them. It is remark- able that with all this daring he was never wounded but once, and that by a volley fired in mistake by a picquet of Portuguese troops. Interesting notices of the great personages with whom Lord Combermere came in contact are much more numerous. We must extract one characteristic Anecdote of the Duke of Wellington.

One day the Commander-in-Chief and Sir Brent Spencer were riding out together, when Sir Brent took the opportunity of questioning Lord Wellington as to his plan of operations. The conversation ran nearly as follows :—Sir Brent Spencer.: " We are about, my Lord, to engage in a very hazardous campaign, and no one can tell what may befall any one of us. _I am sure that I trust most sincerely that nothing will happen to your. Lord- ship. It would be a great misfortune to the army if it were -to

lose you ; but still you might be killed, and I think it necessary

that I should ask you what are your plans, in order that I may carry them out, in ease I should unfortunately succeed to the com-

On the whole, we could wish, as we have said, that the book had been better done, but it certainly contains a great deal ,0f interesting matter that will repay the trouble of,gettiag at it,