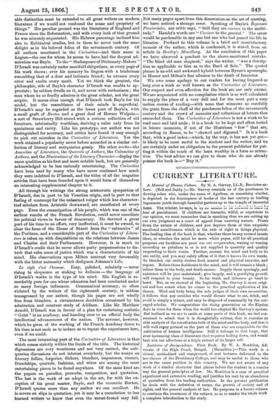 A Manual of Hunan Culture. By M. A. Garvey, LL.B., Barrister-at- Law. (Bell and Daldy.)—Mr. Garvey reminds us of the gentleman in flowing robes who, under the name of Agathns, or something similar, is depicted in the frontispiece of books of the last century as leading ingenuous youth through beautiful gardens up to the temple of immortal fame. The scholar, he says, is 'oy 1.1::;;;;;I ∎. ILY fear of punishment. If children are fantastic, wilful, or capricious in our opinion, we must remember that in speaking thus we are setting up our own judgment as a court of appeal from unerring nature. Prune down the nature of children, and you deprive them of that exquisite emotional sensitiveness which is the rule of right in things physical. The leading idea of the book is that, whether there be any normal innate ideas, or whether the mind be mere white paper, still for all practical purposes our faculties are quasi vas aut receptacuiwn, waxing or waning according as pabulum is or is not supplied in quantity and quality responding to their wants. Further, assume the mind and body to be one entity, and you may safely affirm of it that it knows its own wants. So blended, our entity desires food, mental and physical exercise, and repose. Refuse those desiderata to the mind, and it will remain a blank ; refuse them to the body, and death ensues. Supply them sparingly, and existence will be just maintained ; give largely, and a gratifying growth will respond to your bounty. So far truth and triteness go hand in hand. But, as we showed at the beginning, Mr. Garvey is more origi- nal and less sound when he comes to the practical application of his • theory. Mind and body being the sole judges of their own necessities, it follows that any outsider who would dictate what to eat, drink, and avoid is simply a tyrant, and may be disposed of summarily by the out- raged scholar. We congratulate the rising generation on the Elysian days in store for them when the world has adopted Mr. Garvey's system. But inclined as we are to smile at some parts of this book, we feel con- strained to admit that it is thoughtfully written, that it contains an able analysis of the constitution both of the mind and the body, and that it will well repay perusal on the part of those who are responsible for the cultivation of human intelligence. Still it belongs to that large, that ever increasing class of literature that requires boiling down, and would best win our affections as a triple extract of its larger self.