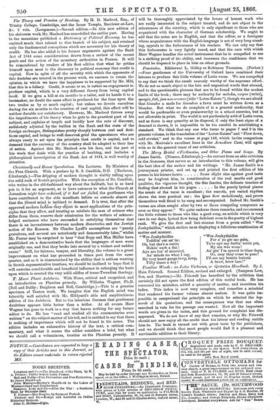 in the Scotsman, that serves as an introduction to this

the best idea of the author and his writings. "Mr. James Smith is a journeyman printer, and set up and printed the first edition of his poems in his leisure hours Some slight sins against good taste may be forgiven him, in consideration of the real merits and good. qualities, the vigorous thought, the fine• fancies, the delioate touches of feeling that abound in his- pages In the purely lyrical pieces the music of the verse is excellent; the smooth, yet varied rhythm shows the true poetical. ear ; the lines flow melodiously, and prove themselves well fitted to be sung and accompanied. Indeed Mr. Smith's verses are often sought after by two or three competing composers as soon as they appear." We quite endorse these remarks, and recommend

the little volume:to those who like a good song, an article which is very rare in our days, lyrical flow being deficient even in the poetry of highest. rank. We give the first and last stanzas from a poem called " Wee .Tonkydaidles," which strikes us as displaying a felicitous combination of matter and manner.

"Wee Jonkydaidles Toddlin! out an'. in Oh, but she's a cuttie

Makin' such a din!

Aye sae fon' of mischief, An' minds na what I say, My very heart gangs beep, lowp, Fifty times a day! "Wee Joukydaidlee For a' ye gie me pain, Ye're aye my dune' tottie yet,. My ain wee wean!

An' gin' rm spared to ither days, Oh, may they come to pass! I'll see my bonnie bairnie A braw, brew lass !"