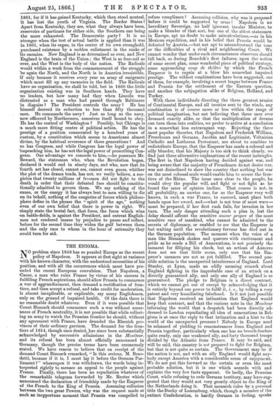 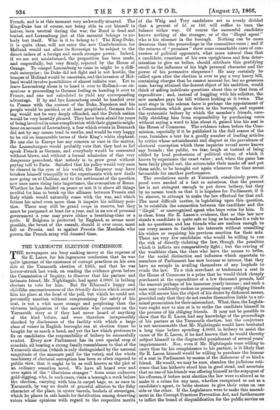 'PTO problem since 1848 has so puzzled Europe as the recent 11 policy of Napoleon. It appears at first sight at variance with his known character, with the understood necessities of his position, and with all the occurrences which must have pre- ceded the recent European convulsion. That Napoleon, a

n o reasonable doubt whatever. Even if it were possible that 'Count Bismark should commence such a war without assur- ances of French neutrality, it is not possible that while collect- ing an army to watch the Prussian frontier he should, without any agreement with France, have denuded the Rhenish pro-

✓ inces of their ordinary garrison. The demand for the fron- tiers of 1814, though once denied has since been substantially acknowledged by successive admissions in the Moniteur, and its refusal has been almost officially announced in 'Germany, though the precise terms have been erroneously stated. We have reason to believe that on receipt of the demand Count Bismark remarked, " Is this serious, M. Bene- detti, because if it is, I must lay it before the German Par- liament ?" whereupon it was withdrawn, the words being in- terpreted rightly to menace an appeal to the people against France. Finally, there has been no repudiation whatever of the remarkable telegram forwarded by Mr. Reuter which announced the declaration of friendship made by the Emperor -of the French to the King of Prussia. Assuming collusion between the two great Powers, why was the request made at refuse compliance ? Assuming collision, why was it proposed before it could be supported by arms ? Napoleon is no hereditary Sovereign, no half ignorant insular Minister, to make a blunder of that sort, but one of the ablest statesmen in Europe, apt no doubt to make miscalculations,—as in his Mexican expedition, and in his belief that Prussia would be defeated by Austria,—but not apt to misunderstand the tone or the difficulties of a rival and neighbouring Court. We cannot wonder that under such circumstances observers should fall back, as during Benedek's first failures, upon the notion of some secret plan, some wonderful piece of political strategy, some approaching coup de theiitre by which the French Emperor is to regain at a blow his somewhat impaired prestige. The wildest combinations have been suggested, one of them, for example, involving a secret league between France and Prussia for the settlement of the Eastern question, and another the subjugation alike of Belgium, Holland, and Turkey.

With three individuals directing the three greatest armies of Continental Europe, and all treaties sent to the winds, any combination is of course more or less within the range of political imagination, but not believing that three men ever dreamed exactly alike, or that the multiplication of dreams can turn them into realities, we prefer to arrive at a conclusion in a somewhat less extravagant way. Rejecting the three most popular theories, that Napoleon and Frederick William, Frenchman and German, Jacobin and Legitimist, Voltairian Catholic and Lutheran Protestant, are about to combine to redistribute Europe, that the Emperor has made a colossal and silly blunder, that his Majesty is too sick to think clearly, we find just three alternative explanations of the recent imbroglio. The first is, that Napoleon having decided against war, and being aware that the majority of Frenchmen do not desire war, was not disinclined to show the country that nothing but war on the most colossal scale would enable him to secure the fron- tiers of the Rhine. The issue once clear to the people, he would obey the popular will, and fight or not fight as he found the mass of opinion incline. That course is not, in all probability, an unwise one, for as the Emperor very well knows, in such a war France, to succeed, must place both hands upon her sword, and—what is not true of most wars— must be prepared, if her first rush fails, for invasion in her turn. The only danger attending such a plan is, lest the delay should affront the sensitive amour propre of the most sensitive race of mankind, who cannot be admitted to the secrets of diplomacy, or enabled to see that the Emperor is but waiting until the revolutionary fervour has died out in the German population. The moment when the voice of a man like Bismark shakes and quavers with excitement and pride as he reads a Bill of Annexations, is not precisely the moment for filliping his cheek, but an artisan of Auxerre does not see that little scene, only sees that his Em- peror's menaces are not as yet fulfilled. The second pos- sible solution is the unexpected interference of England. Lord Stanley, at Lynn, made an oddly meaning remark about England fighting in the improbable case of an attack on a directly guaranteed ally, and only one ally of England is so guaranteed. The pledge to Belgium is a direct contract, which we cannot get out of except by acknowledging that it is entirely beyond our power to fulfil it, 1. e., by telling a very patent and very humiliating falsehood. Is it not just possible that Napoleon received an intimation that England would keep that contract, and that the curious note in the Moniteur informing the world that a despatch had been directly ad- dressed to London repudiating all idea of annexations in Bel- gium is at once the reply to that intimation and a hint to the world of the unexpected pressure ? Nobody in Europe need be ashamed of yielding to remonstrances from England and Prussia together, particularly when one has no breech-loaders quite ready, only one weakened ally, and forty thousand troops divided by the Atlantic from France. It may be said, and will be said, this country is not prepared to fight for Belgium, but that is not quite so certain. The Government may be if

the nation is not, and with an ally England would fight any- body except America with a considerable sense of enjoyment. We do not put this forward as the certain or even the most probable solution, but it is one which accords with and explains the very few facts apparent. Or lastly, the Prussian Court, while refusing to cede German territory, may have sug- gested that they would not very greatly object to the King of the Netherlands doing it. That monarch rules by a personal title the Duchy of Luxemburg, which, though a member of the

French, and is at this moment very awkwardly situated. The King-Duke has of course, not being able to cut himself. in halves, been neutral during the war, the Bund is dead and buried, and Luxemburg just at this moment belongs to no- body -but itself. Who is it to belong to ? The King-Duke, it is quite clear, will not enter the new Confederation, for Halland would not allow its Sovereign to be subject to the direct. orders of a foreign and much stronger power. Indeed, if we. are not misinformed, the proposition has been made; and respectfully, but very firmly, rejected by the House of Orange. To compel Luxemburg to come in might be a diffi- cult enterprise ;. its Duke did not fight and is not hostile, the temper of Holland would be uncertainrand the invasion of Hol- land wouldinvolve possibilities of almost infinite war. Yet to leave Luxemburg alone is to hand it over to Holland—as ob- noxious a proceeding to German feeling as handing it over to France, and one not calculated to yield any corresponding advantage. If by. and bye Luxemburg could be handed over to. France with the consent of the Duke, Napoleon and his people. would be' pacified, or at least propitiated, German feel- ing would not be very deeply offended, and the Dutch. nation would-be very heartily pleased. They have been afraid for years of being involvedin some complication withtheir gigantic neigh- bour on account of Luxemburg, a fear which.events.in Denmark did not. by, any means tend. to. soothe, and would be very happy to be rid on honourable terms of their King's white elephant. No one else in Europe has any concern or care in the matter, the Luxembuxger&would probably vote that they had. as lief speak: French as German, and everybody would be contented without blows, and without a formal admission of that very dangerous precedent; that nobody is to grow great without paying toll to. Paris. Satisfied that his policy would very soon be cleared in the eyes of his world, the Emperor may have betaken himself tranquilly to the experiments with new fusils now going on atChelons, and to the settlement of the question now once more rising into importance, the evacuation of Rome. Whether he has decided on. peace or -not, it is above all things needful for. him to break up the alliance between Prussia and Italy which would. naturally cease with the war, and which fetters his mind even more than it impairs his military posi- tion.. There. may still be grand coups in reserve, but they must he postponed at least for a year, and in an era. of personal government a. year may prove either a breathing-time or a cycle. If Belgium. is protected by. England, as. seems most possible, the brunt of the assault, should it ever comer must fall on Prussia, and.. as against: Prussia.. the. Marshals who govern. the French. army will. demand time..