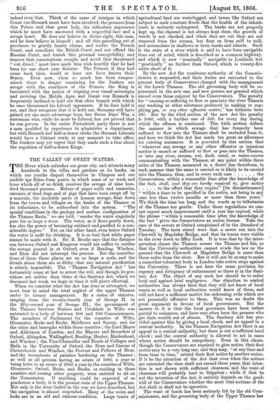 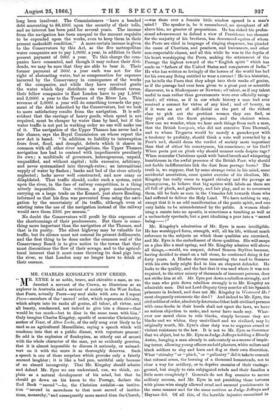 THE VALLEY OF SWEET WATERS. T HE River which refreshes our

great city, and attracts many hundreds to the villas and gardens on its banks, on which our youths disport themselves in Claspers and our middle age fishes from punts, in which some of us wash and from which all of us drink, receives the sewage of nine hun- dred thousand persons. Refuse of paper mills and tanneries, carcases of dead dogs and of pigs that have been swept off by a murrain, the insoluble parts of human sewage, float down from the towns and villages on the banks of the Thames or its tributaries, to be reabsorbed into the system. " The special conditions in the geology and surface configuration of the Thames Basin," we are told, "render the water singularly pure for so large a river. The water, as it flows gently down, has also the power of becoming oxidised and purified to a con- siderable degree." Yet, on the other hand, even below Oxford the water is unfit for drinking. It is so foul that white paper cannot be made with it. Sir. B. Brodie says that the distance run between Oxford and Kingston would not suffice to oxidise the sewage poured in at Oxford, even if Reading. Windsor, and Eton did not interrupt the process. But the contribu- tions of these three places are on so large a scale, and the details about them are so filthy, that any natural purification is utterly impossible. The " Thames Navigation Act " has fortunately come at last to arrest the evil, and though its pro- visions are milder than those of the Sanitary Act, which we discussed last week, we hope in time it will prove effectual.

When we consider what the Act has done or attempted, we must bear in mind the total neglect of the upper Thames under its former management. By a series of statutes, ranging from the twenty-fourth year of George II. to the fifty-second year of George III., the government of the Thames between Staines and Cricklade in Wilts was entrusted to a body of between 600 and 700 Commissioners. The members of Parliament for the counties of Wilts, Gloucester, Berks and Bucks, Middlesex and Surrey, and for the cities and boroughs within those counties ; the Lord Mayor and Aldermen of London, and the Mayors and Recorders of Oxford, Abingdon, Wallingford, Reading, Henley, Maidenhead, and Windsor ; the Vice-Chancellor and Heads of Colleges and Halls in the University of Oxford, the Dean and Canons of Christchurch and Windsor, the Provost and Fellows of Eton, and the incumbents of parishes bordering on the Thames ; as well as all persons .having an estate of 1001. a year or being heirs to an estate of 2001. a year in the counties of Wilts, Gloucester, Oxford, Berks, and Bucks, or residing in those counties and owning other property, were entitled to sit on the Commission. If anything could be expected of so ponderous a body, it is the present state of the Upper Thames. Not only is the river fouled in the way we have described, but the navigation is almost suspended. Many of the weirs and locks are in an old and ruinous condition. Large tracts of

agricultural land are waterlogged, and towns like Oxford are subject to such constant floods that the health of the inhabi- tants is seriously endangered. The banks are not properly kept up, the channel is not always kept clear, the growth of weeds is not checked, and. when they are cut they are not removed from the stream, but float on from mill to mill, and accumulate in shallows or form banks and islands. Such is the state of a river which is said to have been navigable time out of mind, which is described as a common highway, and which is now " nominally " navigable to Lechlade, but "practically" no further than Oxford, which is twenty-five miles short of it.

By the new Act the cumbrous authority of the Commis- sioners is suspended, and their duties are entrusted to the present body of Conservators charged with the management of the Lower Thames. The old governing body will be re- presented in the new one, and new powers are granted which exceed even those enjoyed by the Conservators. The penalty for " causing or suffering to flow or pass into the river Thames any washing or other substance produced in making or sup- plying gas, or any other offensive matter," has hitherto been 201. But by the 63rd section of the new Act the penalty is 1001., with a further one of 501.. for every day during which the offence is continued. The 64th section defines the manner in which sewage that has formerly been suffered to flow into the Thames shall be excluded from it, and here we think the Act has made too great an allowance for existing nuisances. It is provided by this section that " whenever any sewage or any other offensive or injurious matter is caused or suffered to flow or pass into the Thames, or into any river, stream, cut, dock, canal, or water-course communicating with the Thames, at any point within three miles of the Thames, measured in a direct line theiefrom, in such manner that the same is carried or is likely to be carried

into the Thames, then, and in every such case the Conservators, within a reasonable time after the knowledge of the fact, shall, and they are hereby required to, give 'notice to the effect that they require" [its discontinuance] " within a time to be specified in the notice, not being in any case less than twelve months or more than three years." We think the time too long, and the words as to tributaries .of the Thames too gentle. Under these regulations we can- not expect much improvement until a year has expired, while the phrase " within a reasonable time after the knowledge of the fact " gives the Conservators an undue license. Take the case of the sewers at Oxford complained of in the Standard of Tuesday. The facts stated were that a sewer ran into the Cherwell by Magdalen Bridge, and that its traces were visible in the river down to Iffley Lock. It is true that by the inter- pretation clause the Thames means the Thames and Isis, so that the University authorities cannot evade the law on the ground that the Cherwell at Magdalen Bridge is more than three miles from the river. But it will not be so easy to make a somewhat voluntary body in London take active steps against the University. There is not here the same provision for cogency and stringency of enforcement as there is in the Sani- tary Act. The object of any such law should be to enlist local zeal against local negligence. One objection to central authorities has always been that they will not know of local wants as well as local authorities would know of them, and will not have a sufficient motive for redressing evils which are not personally offensive to them. This was no doubt the great argument in favour of local government. But the answer to it is that the local governors have been rather partial to nuisances, and have very often been the persons who get their wealth out of abuses. The Sanitary Act has pro- vided against this by giving a local check, and an appeal to a central authority. In the Thames Navigation Act there is an appeal to a central authority, but there is not a sufficient local check ; and the central authority is allowed to act in cases where action should be compulsory. Even in this clause, though the Conservators are required to give notice, their first notice may be a very long one, and they may, " at any time and from time to time," extend their first notice by another notice. If it be the intention' of the Act that even when the notices are extended the time shall not exceed three years, that inten- tion is not shown with sufficient clearness, and the want of clearness will probably lead to litigation ; while if that be not the intention of the Act, it entirely depends on the good- will of the Conservators whether the most vital sections of the Act shall or shall not be operative.

The want of funds has been seriously felt by the old Com- missioners, and the governing body of the Upper Thames has

long been insolvent. The Commissioners "have a bonded debt amounting to 88,4001. upon the security of their tolls, and no interest has been paid for several years. The income from the navigation has been unequal to the amount requisite to be expended upon the works, even to keep them in their present makeshift condition." A more certain income is given to the Conservators by this Act, as the five metropolitan water companies are to pay 1,0001. a year, in addition to their present payment of 3001. a year. To this charge the com- panies have consented, and though it may reduce their divi- dends, we may be sure that they are able to bear it. Their former payment of 3001. a year each was not for the right of abstracting water, but as compensation for expenses incurred by the Conservancy in consequence of the works of the companies, and while they have received gratis the water which they distribute on very different terms, their fellow companies in East London have to pay 1,5001. and 2,0001. a year to the Trustees of the River Lea. This revenue of 5,0001. a year will do something towards the pay- ment of the debt inherited by the Conservators, but we look to more satisfactory results from the navigation. It is self- evident that the carriage of heavy goods, when speed is not required, must be cheaper by water than by land, but if the water traffic is not put in working order no one will make use of it. The navigation of the Upper Thames has never had a fair chance, says the Royal Commission on whose report the new Act is based. "In addition to liability to interruption from frost, flood, and drought, defects which it shares in common with all other river navigations, the Upper Thames navigation has had to contend with impediments peculiarly its own ; a multitude of governors, heterogeneous, unpaid, unqualified, and without capital ; tolls excessive, arbitrary, and never systematised into through-rates ; an intermittent supply of water by flashes ; banks and bed of the river utterly neglected ; locks never well constructed, and now crazy or dilapidated. That traffic should, under such a system, exist upon the river, in the face of railway competition, is a thing utterly impossible. One witness, a paper manufacturer, carrying on a large trade on the Kennet, just above Reading, informed us that his firm was prevented from using the navi- gation by the uncertainty of its traffic, although even at existing rates the use of the navigation instead of the railway would save them 2501. per annum."

No doubt the Conservators will profit by this exposure of the shortcomings of their predecessors. But there is some- thing more important than the navigation of the Thames, and that is its purity. The silent highway may be valuable for traffic, but its silence must not conceal its present defilements, and the first thing to be done under the common seal of the Conservancy Board is to give notice to the towns that they must discontinue the flow of their sewage, and to the agricul- tural interest that it must cease throwing its dead pigs into the river, so that London may no longer have to drink of their essence.