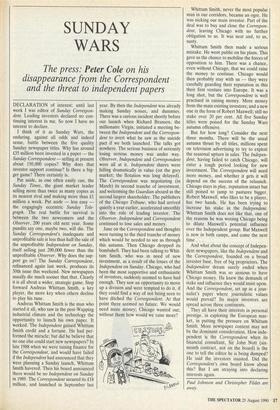 disappearance from the Correspondent and the threat to independent papers

DECLARATION of interest: until last week I was editor of Sunday Correspon- dent. Leading investors declared no con- tinuing interest in me. So now I have no interest to declare.

I think of it as Sunday Wars, the enduring, against all odds and indeed sense, battle between the five quality Sunday newspaper titles. Why has around £35 million been invested in a paper — the Sunday Correspondent — selling at present about 150,000 copies? Why does that investor support continue? Is there a big- ger game? There certainly is.

Put aside, as one often easily can, the Sunday Times, the giant market leader selling more than twice as many copies as its nearest rival and making more than £1 million a week. Put aside — less easy the engagingly eccentric Sunday Tele- graph. The real battle for survival is between the two newcomers and the Observer, 200 years old next year. Some pundits say one, maybe two, will die. The Sunday Correspondent's inadequate and unprofitable sale is less than half the sale of the unprofitable Independent on Sunday, itself selling just 200,000 fewer than the unprofitable Observer. Why does the sup- port go on? The Sunday Correspondent, refinanced again last week, produces its 50th issue this weekend. New newspapers usually die much sooner that that. Clearly it is all about a wider, strategic game. Step forward Andreas Whittam Smith, a key player, the more key when others decline to play his tune.

Andreas Whittam Smith is the man who started it all, who saw in the post-Wapping industrial climate and the technology the opportunity to launch his own paper. It worked. The Independent gained Whittam Smith credit and a fortune. He had per- formed the miracle; but did he believe that no one else could start new newspapers? In late 1988 when we were raising finance for the Correspondent, and would have failed if the Independent had announced that they were planning a Sunday launch, Whittam Smith havered. Then his board announced there would be no Independent on Sunday in 1989. The Correspondent secured its £18 million, and launched in September last

year. By then the Independent was already making Sunday noises, and dummies. There was a curious incident shortly before our launch when Richard Branson, the millionaire Virgin, initiated a meeting be- tween the Independent and the Correspon- dent to avert what he saw as the suicide pact if we both launched. The talks got nowhere. The serious business of seriously losing serious money was under way. Observer, Independent and Correspondent were all at it. Independent shares were falling dramatically in value (on the grey market; the flotation was long delayed). The Correspondent was negotiating (in March) its second tranche of investment, and welcoming the Guardian aboard as the second largest shareholder. The publishers of the Chicago Tribune, who had arrived quietly a year earlier, accelerated smoothly into the role of leading investor. The Observer, Independent and Correspondent continued to lose sales and money.

June on the Correspondent and thoughts were turning to the third tranche of money which would be needed to see us through this autumn. Then Chicago dropped its bombshell. They had been talking to Whit- tam Smith, who was in need of new investment, as a result of the losses of the Independent on Sunday. Chicago, who had been the most supportive and enthusiastic of investors, suddenly seemed to have had enough. They saw an opportunity to move up a division and were tempted to do it, if they could find a way of not being seen to have ditched the Correspondent. At that point there seemed no future. We would need more money; Chicago wanted out; without them how would we raise more?

Whittam Smith, never the most popular man in our corridors, became an ogre. He was nicking our main investor. Part of the deal was to buy and close the Correspon- dent, leaving Chicago with no further obligation to us. It was neat and, to us, nasty.

Whittam Smith then made a serious mistake. He went public on his plans. This gave us the chance to mobilise the forces of opposition to him. There was a chance, even without Chicago, that we could raise the money to continue. Chicago would then probably stay with us — they were carefully guarding their reputation in this their first venture into Europe. It was a long shot, but the Correspondent is well practised in raising money. More money from the main existing investors; and a new one in the form of Robert Maxwell; still no stake over 20 per cent. All five Sunday titles were poised for the Sunday Wars autumn offensive.

But for how long? Consider the next three months. There will be the usual autumn thrust by all titles, millions spent on television advertising to try to exploit the seasonal upturn in sales. The Indepen- dent, having failed to catch Chicago, will enter a tough period looking for new investment. The Correspondent will need more money, and whether it gets it will depend on the success of the relaunch. Chicago stays in play, reputation intact but still poised to jump to pastures bigger. Robert Maxwell, who likes to be a player, has two hands. He has been trying to increase his stake in the Independent. Whittam Smith does not like that, one of the reasons he was wooing Chicago being to dilute Maxwell's potential influence over the Independent group. But Maxwell is now in both camps, and come the next time . . .

And what about the concept of Indepen- dent newspapers, like the Independent and the Correspondent, founded on a broad investor base, free of big proprietors. The Independent dream surely ended when Whittam Smith was so anxious to have Chicago money. He knew the demands of stake and influence they would insist upon. And the Correspondent, set up as a jour- nalist's paper where journalistic values would prevail? Its major investors are spread across three continents.

They all have their interests in personal prestige, in exploring the European mar- ket, in putting the pressure on Whittam Smith. More newspaper content may not be the dominant consideration. How inde- pendent is the Correspondent when its financial consultant, Sir John Nott (six- month contract, not on the board) is the one to tell the editor he is being dumped? He said the investors insisted. Did the Correspondent's own board know about this? But I am straying into declaring interests again.