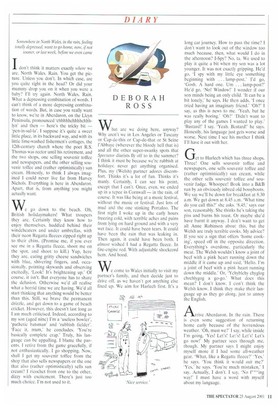 Somewhere in North Wales, in the rain, feeling totally depressed, want to go home, now, if not sooner, or last week, before we even came

Idon't think it matters exactly where we are. North Wales. Rain. You get the picture. Unless you don't. In which case, are you quite right in the head? Or did your mummy drop you on it when you were a baby? I'll try again. North Wales. Rain. What a depressing combination of words. I can't think of a more depressing combination of words. But, in case you really want to know, we're in Aberdaron, on the Lleyn Peninsula, pronounced `chhhhhchhhhchhhlyn' and then — here's the tricky bit — 'pen-in-sul-la'. I suppose it's quite a sweet little place, in its backward way, and with its little lime-washed fishermen's cottages, the 12th-century church where the poet R.S. Thomas was rector until his retirement, and the two shops, one selling souvenir toffee and newspapers, and the other selling souvenir toffee and (rather optimistically) sun cream. Honestly, to think I always imagined I could never live far from Harvey Nichols. Everything is here in Aberdaron. Apart, that is, from anything you might actually want.

Wi: go down to the beach. Oh, British holidaymakers! What troupers they are. Certainly they know how to enjoy themselves, huddled behind their windcheaters and under umbrellas, with their neon Regatta fleeces zipped right up to their chins. (Promise me, if you ever see me in a Regatta fleece, shoot me on the spot, and shoot to kill.) Yup, here they are, eating gritty cheese sandwiches with blue, shivering fingers, and, occasionally, pointing skywards and observing excitedly, 'Look! It's brightening up.' Of course, it isn't. But everyone has to share the delusion. Otherwise we'd all realise what a horrid time we are having. We'd all start thinking that anything would be better than this. Still, we brave the permanent drizzle, and get down to a game of beach cricket. However, this doesn't last long as I am much criticised. Indeed, according to my son (aged nine) I'm a `useless bowler', 'pathetic batsman' and `rubbish fielder'. `Face it, mum,' he concludes. 'You're basically complete crap.' Truly, his language can be appalling. I blame the parents. I retire from the game gracefully, if not enthusiastically. I go shopping. Now, shall I get my souvenir toffee from the shop that also sells newspapers or the one that also (rather optimistically) sells sun cream? I ricochet from one to the other, dizzy with excitement. There's just too much choice. I'm not used to it. What are we doing here, anyway? Wh) aren't we in Los Angeles or Tuscany or Cap-de-this or Cap-de-that or St Seine l'Abbaye (wherever the bloody hell that is) and all the other super-swanky spots that Spectator diarists fly off to in the summer? I think it must be because we're rubbish at holidays; never get anything organised. Plus, my (Welsh) partner adores discomfort. Thinks it's a lot of fun. Thinks it's manly. Certainly, I can see his point, except that I can't. Once, even, we ended up in a tepee in Cornwall — in the rain, of course. It was like being at a music festival, without the music or festival. Just lots of mud and the one stinking Portaloo. The first night I woke up in the early hours freezing cold, with terrible aches and pains from lying on hard ground and with a very wet face. It could have been tears, It could have been the rain that was leaking in. Then again, it could have been both. I almost wished I had a Regatta fleece. In fire-engine red, With adjustable shockcord hem. And hood.

We come to Wales initially to visit my partner's family, and then decide just to drive off. as we haven't got anything else fixed up. We aim for Harlech first. It's a

long car journey. How to pass the time? I don't want to look out of the window too much because, then, what would I do in the afternoon? I-Spy? No, ta. We used to play it quite a bit when my son was a lot younger. It was not exactly gripping. He'd go, `I spy with my little eye something beginning with . . . lamp-post.' I'd go, 'Gosh. A hard one. Urn . . lamp-post?' He'd go, `No! Window!' I wonder if our son minds being an only child. 'It can be a bit lonely,' he says. He then adds, 'I once tried having an imaginary friend.' Oh?' I say, as this is news to me. 'Yeah, but he was really boring.' Oh?' 'Didn't want to play any of the games I wanted to play.' 'Bastard!' I say. 'Yeah. Bastard!' he says. Honestly, his language just gets worse and worse. Next time I see his mother I think I'll have it out with her.

Get to Harlech which has three shops. Three! One sells souvenir toffee and newspapers, one sells souvenir toffee and (rather optimistically) sun cream, while the other sells souvenir toffee and souvenir fudge. Whoopee! Book into a B&B run by an obviously inbred old bossyboots. We say we'll be down for breakfast at 8.30 a.m. We get down at 8.45 a.m. 'What time do you call this?' she asks. '8.45,' says our son, reasonably. She thinks he's taking the piss and burns his toast. Or maybe she'd have burnt it anyway. I don't want to get all Anne Robinson about this, but the Welsh are truly terrible cooks. My advice? If you see a sign that offers `home cooking', speed off in the opposite direction. Everything's overdone, particularly the meat. The Welsh wouldn't know a joint of beef with a pink heart running down the middle if it came up and said, 'Hello. I'm a joint of beef with a pink heart running down the middle.' Or, 'Ychyblchy chyglog chrchlygog a go-go.' What does this mean? I don't know. I don't think the Welsh know. I think they make their language up as they go along, just to annoy the English.

Arrive Aberdaron. In the rain. There is even some suggestion of returning home early because of the horrendous weather. 'Oh, must we?' I say, while inside I'm going, 'Yes! Let's! Let's! Let's! Let's go now!' My partner sees through me. though. My partner says I might enjoy myself more if I had some all-weather gear. `What, like a Regatta fleece'?' Yes,' he says. 'You think it would suit me?' 'Yes,' he says. 'You're much mistaken,' I say. Actually, I don't. I say, 'No f"'ing way!' I must have a word with myself about my language.