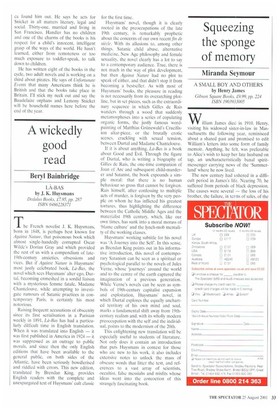 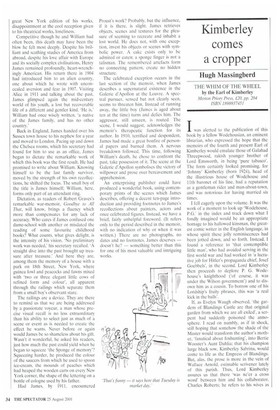 Squeezing the sponge of memory

A SMALL BOY AND OTHERS by Henry James

William James died in 1910. Henry, visiting his widowed sister-in-law in Massachusetts the following year, reminisced about a shared past and promised to edit William's letters into some form of family memoir. Anything, he felt, was preferable to Alice's wish to keep her late husband on tap, an uncharacteristically banal spiritmessenger carrying news of the 'Summerland' where he now lived.

The new century had ushered in a difficult period in James's life. Nearing 70, he suffered from periods of black depression. The causes were several — the loss of his brother, the failure, in terms of sales, of the great New York edition of his works, disappointment at the cool reception given to his theatrical works, loneliness.

Competitive though he and William had often been, this death may have been the blow he felt most deeply. Despite his brilliant and scathing studies of America from abroad, despite his love affair with Europe and its socially complex civilisations. Henry James remained profoundly, heart-wrenchingly American. His return there in 1904 had introduced him to an alien country, one about which he wrote with unconcealed aversion and fear in 1907. Visiting Alice in 1911 and talking about the past, James glimpsed again the mid-century world of his youth, a lost but recoverable life of a different and gentler kind. 'He is,' William had once wisely written, 'a native of the James family, and has no other country.'

Back in England, James handed over his Sussex town house to his nephew for a year and moved to London. Pacing up and down the Chelsea rooms, which his secretary had found for him to use as an office, James began to dictate the remarkable work of which this book was the first result. He had promised to write about William. Knowing himself to he the last family survivor, moved by the strength of his own recollections, he shifted the focus. The small boy of the title is James himself; William, here, forms only part of an attendant ring.

Dictation, as readers of Robert Graves's remarkable war-memoir, Goodbye to That, will know, brings a fluency which more than compensates for any lack of accuracy. Who cares if James confused one dame-school with another or misdated the reading of some favourite childhood books? What counts, what gives delight, is the intensity of his vision. 'No preliminary work was needed,' his secretary recalled. 'A straight dive into the past brought up treasure after treasure.' And here they are, among them the memory of a house with a park on 18th Street, New York, where guinea fowl and peacocks and fawns mixed with 'two or three elegant little cows of refined form and colour', all apparent through the railings which separate them from a small boy's observant stare.

The railings are a device. They are there to remind us that we are being addressed by a passionate voyeur, a man whose precise visual recall is no less extraordinary than his ability to select just as much of a scene or event as is needed to create the effect he wants. Never before or again would James be so shameless about his gift. Wasn't it wonderful, he asked his readers, just how much the past could yield when he began to squeeze 'the Sponge of memory'? Squeezing harder, he produced the colour of the saucers from which he used to spoon ice-cream, the mounds of peaches which had heaped the wooden carts on every New York corner, the shape of the lettering on a bottle of cologne used by his father.

Had James, by 1911, encountered Proust's work? Probably, but the influence, if it is there. is slight. James retrieves objects, scenes and textures for the pleasure of seeming to recreate and inhabit a lost world. He does not, with one exception, invest his objects or scenes with symbolic power. A cake exists only to be admired or eaten; a sponge finger is not a talisman. The remembered artefacts form no connecting pattern, create no hidden structure.

The celebrated exception occurs in the last section of the memoir, when James describes a supernatural existence in the Galerie d'Apollon at the Louvre. A spectral pursuer, sensed but not clearly seen, seems to threaten him. Instead of running away, the little boy (James is aged about ten at the time) turns and defies him. The aggressor, still unseen, is routed. The scene, I would suggest, acknowledges the memoir's therapeutic function for its author. In 1910, terrified and despondent, James had made a great bonfire of personal papers and burned them. A nervous breakdown followed. This time, following William's death, he chose to confront the past, take possession of it. The scene at the Galerie d'Apollon symbolises the victory of willpower and prose over bereavement and apprehension.

An enterprising publisher could have produced a wonderful book, using contemporary prints of the scenes which James describes, offering a decent ten-page introduction and providing footnotes to James's recollections about painters, actors and once celebrated figures. Instead, we have a brief, fairly unhelpful foreword. (It refers only to the period described in the memoir, with no indication of why or when it was written.) There are no photographs, no dates and no footnotes. James deserves — doesn't he? — something better than this for one of his most valuable and intriguing works.