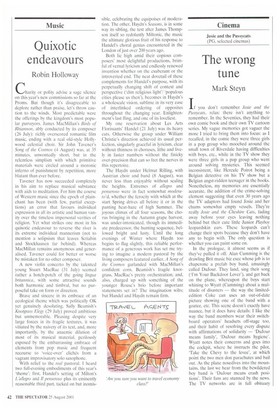 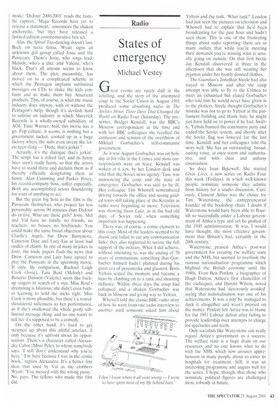 If you don't remember Josie and the Pussycats, relax: there isn't anything to remember. In the Seventies, they had their own comic book and their own TV cartoon series. My vague memories got vaguer the more I tried to bring them into focus: as I recalled, in the comic they were three girls in a pop group who mooched around the small town of Riverdale having difficulties with boys, etc., while in the TV show they were three girls in a pop group who went around solving mysteries, This seemed inconsistent, like Hercule Poirot being a Belgian detective on his TV show but a Belgian angst-ridden teenager in the books. Nonetheless, my memories are essentially accurate, the addition of the crime-solving element suggesting that even 30 years ago the TV adaptors had found Josie and her chums somewhat empty vessels. They're really Josie and the Cheshire Cats, fading away before your eyes leaving nothing behind but their cute little Junior Playboy leopardskin ears. These leopards can't change their spots because they don't have any to begin with. The only question is whether you can paint some on.

mode: 'DuJour 2000-2001' reads the tasteful caption. 'Mega Records have yet to release a statement,' announces the shaken anchorette, 'but they have released a limited-edition commemorative box set.'

Alas, the Spinal Tap-dancing doesn't last. Back on terra firma, Wyatt signs an unknown girl group called Josie and the Pussycats. There's Josie, who sings lead; Melody, who's a ditz; and Valerie, who's black. That's all anyone seems to know about them. The plot, meanwhile, has moved on to a complicated scheme in which the Pentagon implants subliminal messages on CDs to make the kids conform and to make them buy American products. This, of course, is what the music industry does anyway, with or without the Pentagon's help, though it's devilish hard to satirise an industry in which Maverick Records is a wholly-owned subsidiary of AOL Time Warner. Still, this movie has a go. Pop culture, it seems, is nothing but a government racket, cooked up in a huge factory where the suits even invent the latest teen slang — 'Dude, that's jerkin'!'

But the great big hole in the film is the Pussycats themselves, who project far less personality across 90 minutes than DuJour do in five. Who are these girls? Josie, Mel and Val have no family, no friends, no teachers, no bosses, no boyfriends. You could make the same broad objection about Charlie's Angels, but Drew Barrymore, Cameron Diaz and Lucy Liu at least had oodles of charm. In one of many in-jokes in Josie. the trade papers flash the news that Drew, Cameron and Lucy have agreed to play the Pussycats in the upcoming movie. If only. By comparison, Rachael Leigh Cook (Josie), Tara Reid (Melody) and Rosario Dawson (Valerie) seem like backup singers in search of a star. Miss Reid's drumming is hilarious: she didn't even bother learning to hold the sticks right. Miss Cook is more plausible, but there's a roundshouldered sullenness to her performance, as if she's swallowed the whole goofy subliminal message thing, and no one wants to tell her it's supposed to be a comedy.

On the other hand, it's hard to get steamed up about this pitiful artefact, if only because it's upfront about its opportunism. There's a character called Alexandra Cabot (Missi Pyle), to whom somebody says, 1 still don't understand why you're here. I'm here because I was in the comic book, replies Alexandra. It's a better line than that used by Val as she clobbers Wyatt: 'You messed with the wrong pussy.' No, guys. The fellows who made this film did.