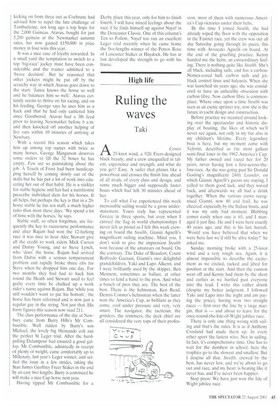 2.5-knot wind, a 92ft Frers-designed black beauty, and a crew unequalled in talent, experience and strength, and what do you get? Easy. A sailer that planes like a powerboat and crosses the finish line ahead of all rivals, of every class and design, and some much bigger and supposedly faster boats which had left 30 minutes ahead of her.

To call what I've experienced this week memorable sailing would be a gross understatement. Yours truly has represented Greece in three sports, but even when I carried the flag in world championships I never felt as proud as I felt this week crewing on board the Stealth, Gianni Agnelli's magnificent sailing machine. Mind you, I don't wish to give the impression Stealth won because of the amateurs on board. On the contrary. The Duke of Beaufort, Count Rafted° Gaetani, Gianni's two delightful grandchildren. Yaki and Lapo Alkenn, and I were brilliantly used by the skipper, Ben Mennem, sometimes as ballast, at other times to lend a hand to the pros. And what a bunch of pros they are. The best of the best. There is the helmsman, Ken Read, Dennis Conner's helmsman when the latter won the America's Cup, as brilliant as they come, cool under pressure and very, very smart. The navigator, the tactician, the grinders, the trimmers, the deck chief are all considered the very tops of their profes sion, most of them with numerous America's Cup victories under their belts.

By the time I joined Stealth, she had already wiped the floor with the opposition in the Fastnet race, yet the crew was out all day Saturday going through its paces, this time with Awocato Agnelli on board. At the end of the gruelling practice, Kenny handed me the helm, an extraordinary feeling. There is nothing quite like Stealth. She's all black, including sails, and has a carbonNomex-cored hull, carbon sails and jetblack control lines and halyards. When she was launched six years ago, she was considered to have an unhealthy obsession with carbon fibre. Now carbon fibre is commonplace. Where once upon a time Stealth was seen as an exotic sprinter toy, now she is the future in yacht design and construction.

Before practice we steamed around looking over the spectacular and historic display of boating, the likes of which we'll never see again, not only in my but also in my children's lifetime. Every legendary boat is here, but my moment came with Nefertiti, described as the most gallant semi-final loser in the 1962 America's Cup. My father owned and raced her for 20 years, never having lost a first-across-theline-race. As she was going past Sir Donald Gosling's magnificent 246ft Leander, on which Gianni Agnelli's guests are staying, I yelled to them good luck. and they waved back, and afterwards we all had a drink together. When the various crews recognised Gianni, now 80 and frail, he was cheered, especially by the Italian boats, and it was my only had moment. Blubbing comes easily when one is 65. and I managed it just fine. He and I were here exactly 40 years ago, and this is his last hurrah. 'Would you have believed that when we were here last we'd still be alive today?' he asked me.

Sunday morning broke with a 25-knot wind and a very rough sea. Again, it is almost impossible to describe the excitement as we circled, tacked and jibed for position at the start. And then the cannon went off and Kenny had them by the short and curlies as we hurtled past everyone into the lead. I write this rather drunk (despite my better judgment. I followed Yaki and Lapo into the night and am paying the price), having won two straight races — first over the line by a large margin, that is — and about to leave for the once-round-the-Isle-of-Wight jubilee race.

There is only one thing wrong with sailing and that's the rules. It is as if Anthony Crosland had made them up. In every other sport the fastest wins. Not in sailing. In fact. it's comprehensive time. One has to wait for the dumbest in school; here the trophies go to the slowest and smallest. But I despise all that. Stealth, crewed by the best, has never lost, and we're about to go Out and race, and my heart is beating like it never has, and I've never been happier, Stop press: We have just won the Isle of Wight jubilee race.